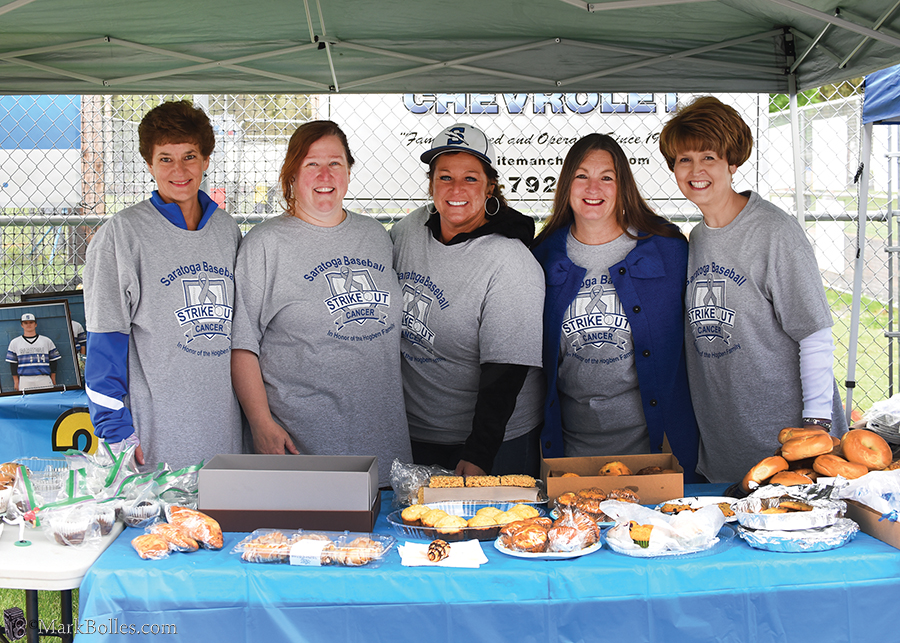 In addition to honoring the team’s senior players, the May 13 non-league game against Schuylerville was also used to raise money for cancer research. To this end, the team raised money in a number of ways, including selling t-shirts. Saratoga Coach Andy Cuthbertson decided that the money should be raised in the name of Tracy Hogben, a long-time Saratoga Springs City School District substitute teacher, recent full-time employee at Lake Avenue Elementary, and parent of five children currently enrolled in the district alongside her husband, Gordon. Three of their children – Gordon Jr., Harrison, and Griffin – play baseball for Saratoga.

On Oct. 18 of last year, Hogben suffered a seizure at home, which led to her diagnosis on Oct. 25 of a Right Frontal Lobe Primary Brain Tumor. After 13 days at Albany Medical Center and a craniotomy, Hogben was found to have an Oligodendreglioma, a Grade 2 primary brain tumor.

Hogben attended the benefit game and threw out the first pitch in front of around 500 people in attendance. Both the Saratoga Springs and Schuylerville communities have taken part in raising money, and have, as of May 16, raised $4,989. Donations are still being collected, and once collection is finished, the money will be donated to the Albany Medical Center Brain Tumor Research Fund.

“The community did a fantastic job of stepping up to support one of our own families in need,” Robin Chudy said. “The money raised will be a donation to Albany Medical Center as it will provide resources to continue to look for possible cures for cancer.”

According to Chudy, many parents got involved by setting up food tables for the game, as well as by creating a program for the game that included pages dedicated to the Hogben family, as well as pages for all seven senior players. Far from just working towards a noble cause, it was a great day all around for the Blue Streaks as they beat Schuylerville 6-0.

More in this category: « Blue Streaks to Serve Their Country Student Athletes Give Back: Schuylerville Youth Lacrosse Hosts Benefit Shootout »
back to top