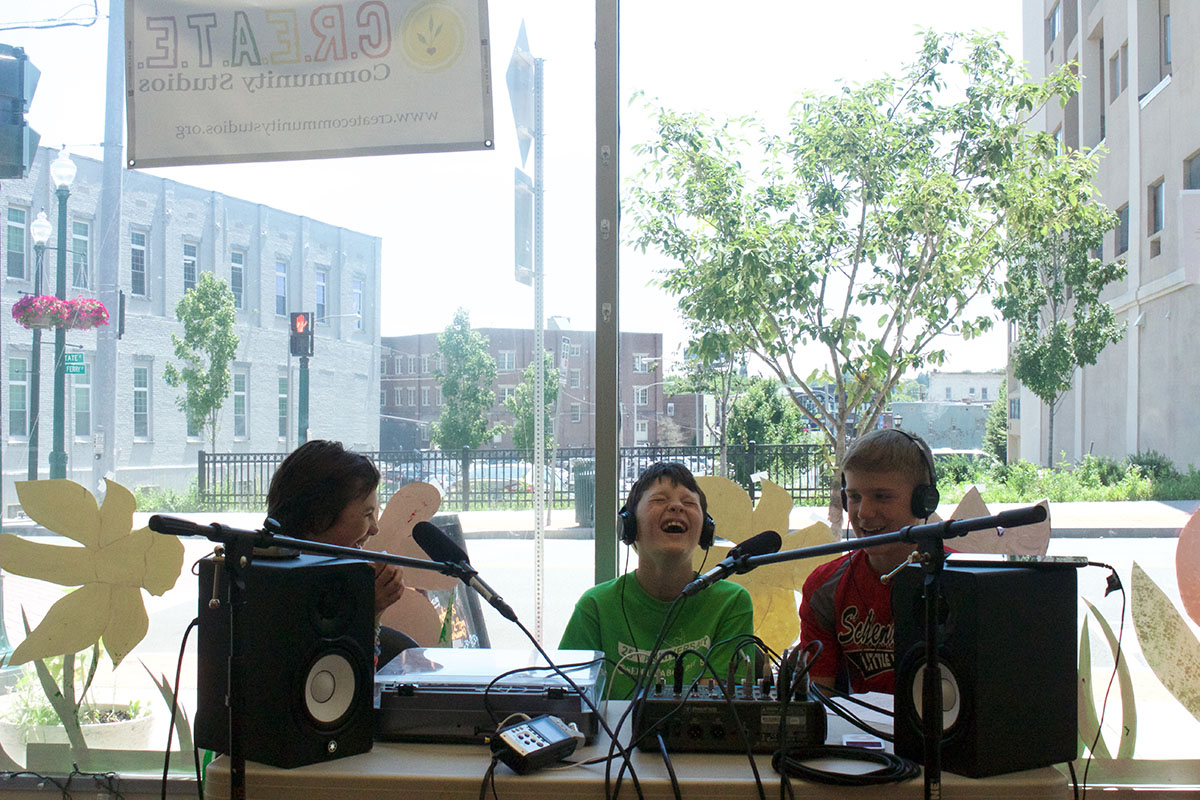 SARATOGA SPRINGS – A local college student and professor are showing young people the power of radio.

Skidmore College junior Adam Simon and professor Adam Tinkle introduced the Upstate Youth Radio & Podcast Project this summer, with the goal of showing Capital Region kids the inner workings of radio production and sound engineering. According to the project’s official website, the project teaches kids “everything you need to be a radio DJ, talk show host, audio documentarian, and podcaster.”

The kids involved with the program are mostly preteens, but the range of ages runs from as young as seven to as old as 20. Simon and Tinkle wanted to be sure that the program would show that kids of all ages could gain things from radio production. Two days out of the week, the program runs workshops for its participating kids in the C.R.E.A.T.E. Community Studios, one at the Saratoga Springs location and the other at the Schenectady venue. Another two days out of the week, they take what they have learned in the workshops and run actual broadcasts from WSPN. On these days, Mondays and Thursdays, from 4-6 p.m., Simon either broadcasts prerecorded material produced during the workshops, or he works with the kids live in the studio. Simon said that for some of the younger participants, the sense of planning something and seeing it play out for an audience is the most engaging part of the program.

The program was made possible via a grant as part of Skidmore’s Faculty/Student Summer Research program, which allows individuals with the school to have around 5-10 weeks of lab or classroom time on-campus during the summer for research purposes. Unlike the traditional research pursuits that this program allows for, the Upstate Youth Radio Project is acting as a sort of pilot program, providing a means for facilitating youth involvement in radio production and testing the waters for a potential network of youth radio programs in the Saratoga area and beyond.

“We are basically acting as if we could propose a sort of permanent installation of this project,” Simon said.

The inspiration for the project partly came from similar projects that Tinkle had run in the past focused on getting young kids involved in experimental and improvisational music. Simon also said that the school’s possession of its own radio station was a major inspiration for creating the program. Creating such a program also went a ways to fixing the situation whereby the station would have to rely on automated playlists in the summer when many of its student DJ’s would be back home.

Simon is a philosophy major at Skidmore College with a minor in media and film studies. He has been involved with Skidmore’s local radio station, WSPN, as a radio DJ since his freshman year. Tinkle is a visiting professor at the school, teaching film and media studies with the John B. Moore Documentary Studies Collaborative.

All photos courtesy of Adam Simon.

More in this category: « Waldorf School Brings the Circus Back to Town Saratoga GO! with Collin Bolles »
back to top