R U Tuff eNuff? These BOCES Students Are 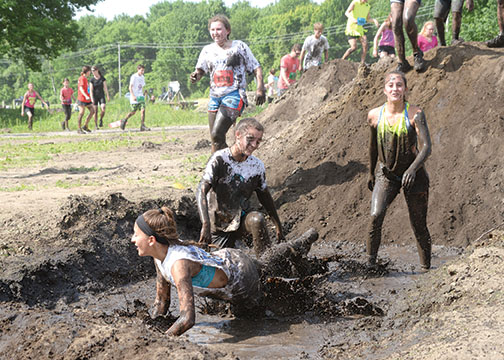 SARATOGA SPRINGS – This Saturday, June 3, will bring the sixth annual TUFF eNUFF obstacle course challenge to Saratoga Springs, providing local families and fitness enthusiasts with a day of high-energy, muddy fun on the reconstituted fields near the F. Donald Myers Education Center.  Prior to the big day, the course itself has to be planned and constructed, and for the last six years these tasks have fallen into the hands of local BOCES students who learn their crafts at the Henning Road campus.

Each September, The Prevention Council gets in touch with Greg Hammond and Ken Brooks, instructors at the Henning Road BOCES in the Heavy Equipment Program, to work out a date for the following year’s TUFF eNUFF challenge.  From there, according to Hammond, the instructors and their students will begin the process of putting together the course about three weeks in advance, beginning first with the planning stages.  The actual construction portion of the build takes up the last week or so before the event takes place.  Every BOCES student in the Heavy Equipment program works on the project, which Hammond estimates to be around 80 students in a given year.

According to some of the students who have worked on this year’s course, the equipment used to prepare the TUFF eNUFF course are the typical vehicles that one would expect on a construction site: excavators, backhoes, bulldozers, wheel loaders, and more.

“A little bit of everything,” Hammond said.

This equipment is used to create the primary facets of the TUFF eNUFF course, including trenches to be filled with muddy water, and giant mounds of dirt to be scaled by runners.  After these elements are in place, Hammond says that a number of other elements are brought in to spice things up, including logs, tires, ropes, and a number of other things to make the course more challenging.

Aaron Lohaus, a student in the Heavy Equipment program, also noted the importance of safety in designing and constructing the course.  He said that different considerations have to be made for the children’s course versus the normal course, including the depth of the trenches, to avoid potential drowning hazards for the smaller competitors.  Furthermore, safety checks for the whole project are needed to ensure that nothing is left in place that might be too sharp or that might trip up participants in a bad way.

All the tasks that go into creating these courses tie back into the lessons the students learn in the Heavy Equipment program.  Unsurprisingly, proper operation techniques are an important part of the program, but the students also learn how perform maintenance on the various vehicles and pieces of equipment they work with.  Additionally, as Lohaus highlighted, safety is a major part of what they learn about, especially when it comes to being aware of their fellow workers on the project site.

In recent years, the Prevention Council has also brought in students from other BOCES programs to improve the overall TUFF eNUFF experience.  This includes students from the culinary program, who help put together a barbeque for the event, as well as student from the criminal justice program, who help to police the course and direct the flow of participants on the course.

The Sixth Annual TUFF eNUFF challenge will take place at the Henning Road BOCES on June 3.  The Kids 1 Mile Run will begin at 8:30 a.m., followed by the Teens/Adults 5K at 9:15 a.m.  Anyone interested can register at www.finishright.com, and more information can be found by calling 518-581-1230.

More in this category: « Putting a Face to History: Korean War Veterans Speak to Saratoga Students Off to D.C.: Local Student to Work with U.S. Senate »
back to top