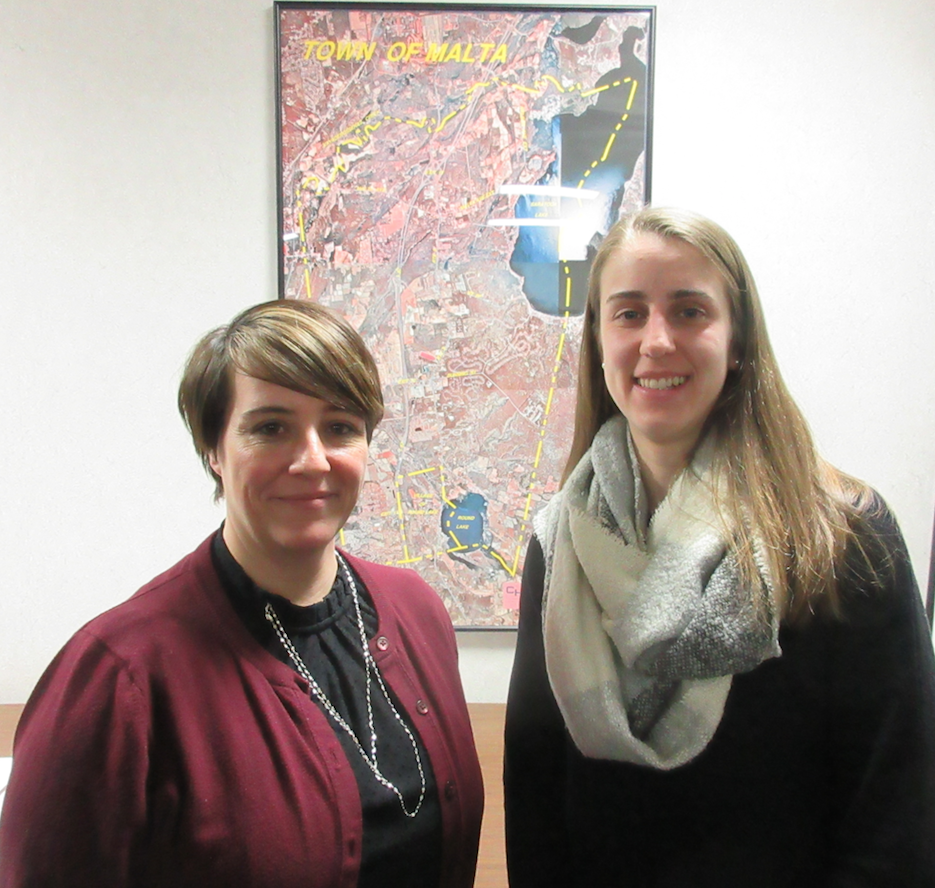 Director of Planning Jamie O’Neill (left) and Acting Director of Parks, Recreation and Human Services Alyssa Benway after the Malta Town Board meeting on Monday, Feb. 5, 2018. Photo by Larry Goodwin.

MALTA – On Monday, town leaders expressed optimism as they officially approved the appointment of a new planning director. They also sought advice from both her and the acting director of the recreation department, regarding a perceived need for a new town engineer.

The Malta Town Board voted unanimously in favor of appointing Director of Planning Jamie O’Neill, who has 16 years of related experience in Saratoga County.

Councilman Tim Dunn indicated that O’Neill is recognized statewide for her knowledge of open space and agricultural matters as they relate to planning processes.

“We were very happy and fortunate to get Jamie,” Supervisor Vince DeLucia said, noting how the planning department has been disrupted in recent months by unexpected staff vacancies. A planning position remains open and needs to be filled, he added.

Yet, instead of more planners, Councilman John Hartzell opined that Malta should consider hiring an in-house engineer as a means to save money. The town now pays consulting fees for staff engineers at the Chazen Companies who are based in Troy.

DeLucia, after inviting comments from O’Neill, agreed with her assessment that engineers and planners specialize in “two very difference disciplines.”

The supervisor also invited comments from Alyssa Benway, who was appointed as Malta’s Acting Director of Parks, Recreation and Human Services late last year after the retirement of Audrey Ball.

Benway has an engineering background following her education at Clarkson University.

Dunn made it clear that he opposes creating a new position for a town engineer in Malta, as neighboring towns have done, because he is “not comfortable doing this outside of the budget process” later this year.

For his part, Malta Comptroller Kevin King recommended that board members must always consider the unpredictable budget impacts of fees paid by local builders.

“The big variable is just development,” King said. “It’s volatile. It’s based on the economy.”

More in this category: « Ballston Zoning Heats Up Construction of New Gailor Road Homes Ahead »
back to top