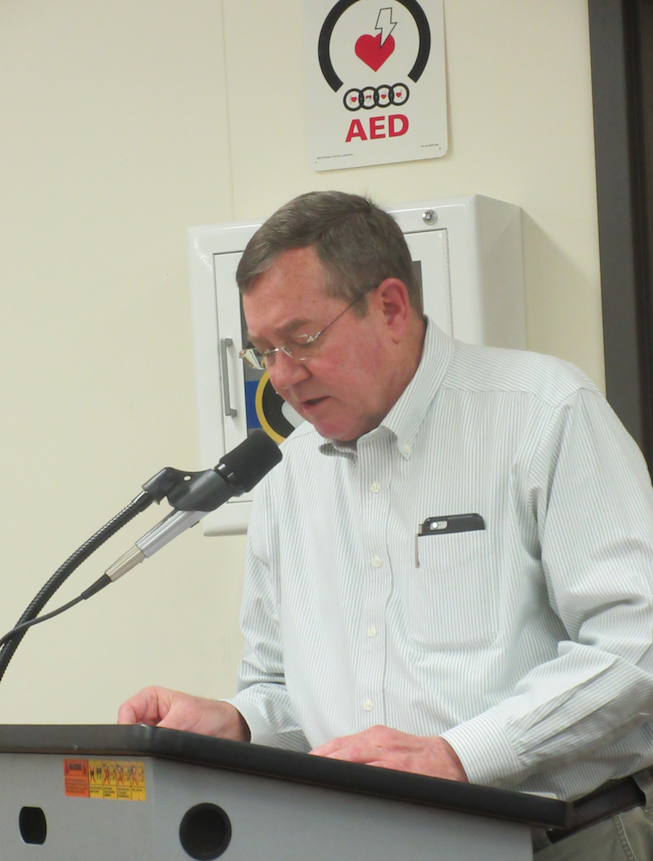 MILTON – Months of delay have endangered carefully laid plans for Milton to finalize a contract with the Boy Scouts of America (BSA) for a purchase of the former Boyhaven property in the northwestern part of town.

On Wednesday night, Milton Planning Board Chairman Larry Woolbright, who has worked diligently for a year in his free time to secure the real estate transaction, made clear his displeasure with the inaction by the Milton Town Board.

Woolbright explained that a donor, who pledged $500,000 toward the purchase insisting on strict anonymity, had decided to rescind that offer due to apparent attempts to reveal his identity.

Plus, Woolbright said, the BSA Twin Rivers Council has communicated to him its intention to instead award a developer the Boyhaven property contract.

The town board agreed to continue this week’s meeting in a special session at 7 p.m. on Tuesday, May 1 as a means to possibly formulate a new contract with the council.

Ostrander started by reading a letter from the Saratoga County Water Quality Coordinating Committee, part of the Soil and Water Conservation District.

The committee supports the town’s Boyhaven land purchase, noting how the property off Route 29 in Middle Grove is a “regional treasure.” The letter called it “one of the least developed areas of the greater watershed” and added that Milton’s purchase would “help to permanently protect the water quality of the Kayaderosseras Creek and Saratoga Lake, also regional treasures.”

Councilwoman Barbara Kerr then requested that Ostrander allow Woolbright to speak, acknowledging how “there are people here who are concerned about it and want the latest news.”

“For the past year, I have been trying to facilitate the purchase of that property by the town for use as a passive recreational park. Boyhaven is a beautiful place, consisting of almost 300 wooded acres and a mile of the Kayaderosseras Creek. It would make a spectacular park that would offer tremendous recreational opportunities to countless generations of Milton residents,” Woolbright said.

“I want to stress that everything I have done has been as a private citizen; I volunteered to help the town board with the tasks that needed to be done,” he continued.

“When the Boy Scout council announced their intention to sell the camp in April of 2017, it represented a once-in-a-lifetime opportunity to preserve this beautiful spot. The town’s proposal was to pay $500,000 for a property that had appraised at $1,040,000. The council chose the town’s proposal in July 2017, despite having an offer of more money from a developer, because the majority of the council members wanted to see it preserved.

“The sales contract with the town required a closing before the end of 2017. Now, nearly four months after that deadline, we still have not closed,” Woolbright said.

There were loud murmurs in the room when he explained that a BSA official informed him that the Twin Rivers Council had decided to sign a new contract with a developer.

“There’s really no excuse for the town’s inaction,” Woolbright added. “It has been nine months since our proposal was accepted. There have been multiple resolutions concerning the project, all passed unanimously by the town board—up to and including one to borrow the $500,000, which I understand is now in the town’s bank account. There also have been considerable funds expended on appraisal, survey, environmental testing and other such expenses.”

The discussion Wednesday was further soured by Woolbright’s next revelation.

“The other thing that I want people to know, is that the sale to the town depended on the generosity of an anonymous donor, who promised to give another $500,000 to the scout council. This civic-minded individual expressed from the very beginning that his name not be made public,” Woolbright said.

“I have told no one the name of this individual, and I will not do so now or in the future. I regret to inform the board that the donor has now taken his offer of support off the table because of attempts to discover his identity. I am very sad that some people refused to respect his desire for privacy,” he added.

“At this point, the situation looks pretty bleak to me,” Woolbright concluded. “If there is any way for the town to salvage this opportunity at the last minute, I urge you to take it.”

Councilman Benny Zlotnick asked if there is any chance the donor will reconsider.

“My best guess is that he will not reconsider,” Woolbright later responded.

Zlotnick went on to compare the current situation in Milton to a previous effort to purchase Boy Scout land and expand Wilton’s Wildlife Preserve and Park.

“This happened many, many years ago at Camp Saratoga,” Zlotnick said, after fondly remembering his own early Boy Scout relationships. “They did the same thing. The council sold it for funds they needed, but the Town of Wilton had the foresight to turn it into the Wilton nature preserve. It’s open seven days a week, 365 days a year. People go up there and they walk and they bike and they cross-country ski.”

Zlotnick elicited rounds of applause for criticizing those who are attempting to expose the anonymous donor; and for seconding a motion made by Kerr to authorize a new contract for the land purchase.

“I think we have to put a better offer on the table for the scouts, and hope they go with it,” Kerr said.

She mentioned that $548,000 in contractors’ fees is coming in. Together with the $500,000 bond, that covers the new offer even without the donor, Kerr said.

Acting Milton Attorney Thomas Peterson, who sat in for Craig due to a reported illness, said the resolution would not be legitimate without “a source for those funds.”

Both Ostrander and Councilman John Frolish questioned the board’s ability to authorize the $1 million expenditure.

Peterson said he actually spoke with the Boy Scout council attorney, who explained that he saw no issues about closing on the Milton deal “in the next couple of weeks.”

Milton is “still bound by the existing contract,” Peterson added.

Twin Rivers Council Commissioner Drew Chesney was present at the meeting in Milton on Wednesday. He reported that there would be no “immediate action.” But without the donor’s money, he added, the council may vote to “open up the bids again.”

“Our president wants a closing date. That’s what the council wants, and we want it soon,” Chesney said.

During the lengthy public comment period, a man who owns property that borders the Boyhaven land, James Lestrange, called what is happening in Milton “absolutely inexcusable.”

“I’m just sick and tired of all of it—of government not being responsive to the needs and the wants of the people,” Lestrange said.