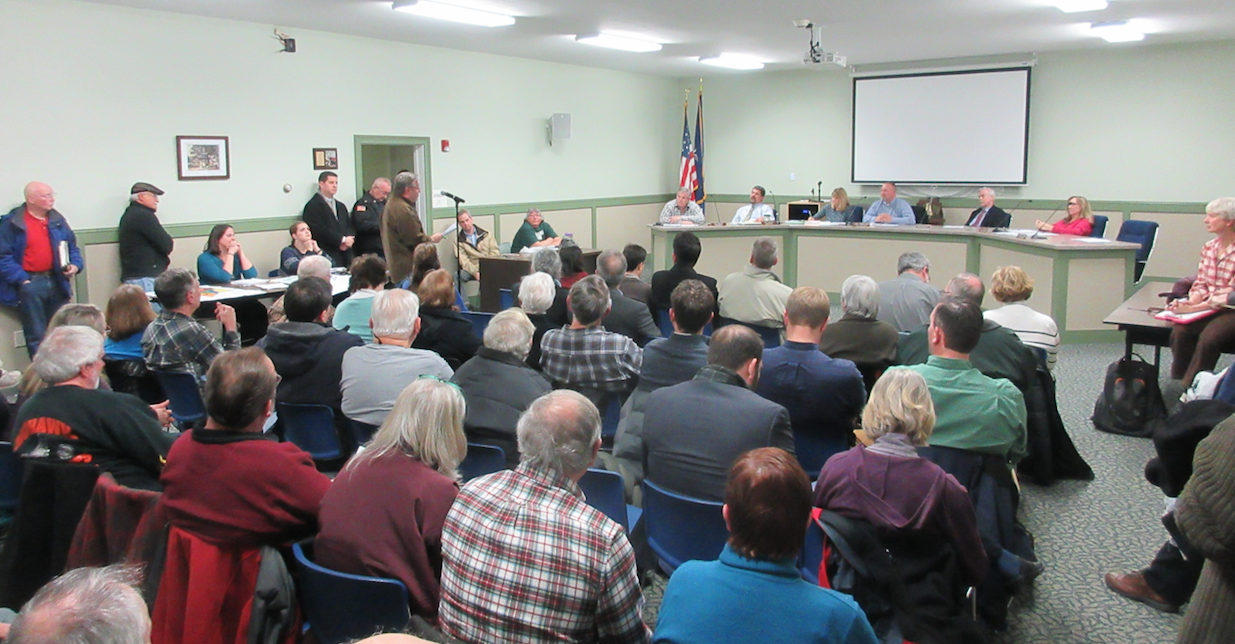 BALLSTON – At least 60 people turned out for a public hearing Tuesday night to discuss comprehensive zoning changes that are being considered by the Ballston Town Board.

For the better part of an hour, Deputy Supervisor Joseph Whalen patiently called the names of local residents who signed up to speak.

Before proceeding with the board’s other agenda items, Whalen said he would leave open the public hearing due to the number of people in attendance.

Several speakers praised town board members for thoroughly preparing the proposed changes, which would update zoning codes in Ballston that have been in place for more than 10 years. The changes specify zoning codes for proper “buffers” from streams, subdivisions, the density of future construction projects, and more.

Other speakers made clear their displeasure with the proposed zoning changes.

“I moved out here to enjoy the night sky,” explained Devil’s Lane homeowner David Marvin. But the increased light pollution and local traffic from construction projects are jeopardizing the charm and appeal of Ballston’s rural areas, he told the board.

Marvin faulted the town, planning and zoning boards for acting as a “rubber stamp” when each new development proposal is made. He said most large projects are being approved “regardless of what the residents want.”

“I would like to make it as difficult as legally and humanly possible to make any further subdivisions of any property within the town of Ballston,” Marvin concluded. His comments prompted a loud round of applause.

“I am not interested in supporting your mistakes,” exclaimed Hop City Road resident Eileen Lofthouse, when she was called upon to address the board members.

Lofthouse handed out “glossy” flyers promoting new apartment communities that were recently built in the area, saying, “These places are empty. They do not fill up.”

She added: “You keep pushing our taxes up, we’ll be paying as much to stay in our homes as we would to go to these places.”

At that point, Councilman William Goslin was compelled to add his own comments to the record.

“I’m very confused as to what some of these speakers are speaking about,” he said. “The zoning changes that we have proposed severely limit development in our town.”

In regards to a previous “planned unit development district” code that covered all of Ballston, Goslin explained, “we eliminated that in every place except Route 50.”

“The tax issue is something that really baffles me, because there’s no town highway tax and there’s no town tax. The zoning package that we passed is not what I’m hearing tonight,” the councilman added.

According to Town Clerk Carol Gumienny, the new zoning language has received an initial approval by the town board but a final vote is required in the months ahead.

Details of the proposed zoning changes are posted in red lettering on the town’s website for public review (http://www.townofballstonny.org/).

The Ballston Town Board’s next regular meeting is scheduled for 6:30 p.m. on Tuesday, Feb. 13 in its main offices at 323 Charlton Road.

More in this category: « More EPA Tests for Village Properties Malta Welcomes Two Women, Waits on Engineer »
back to top