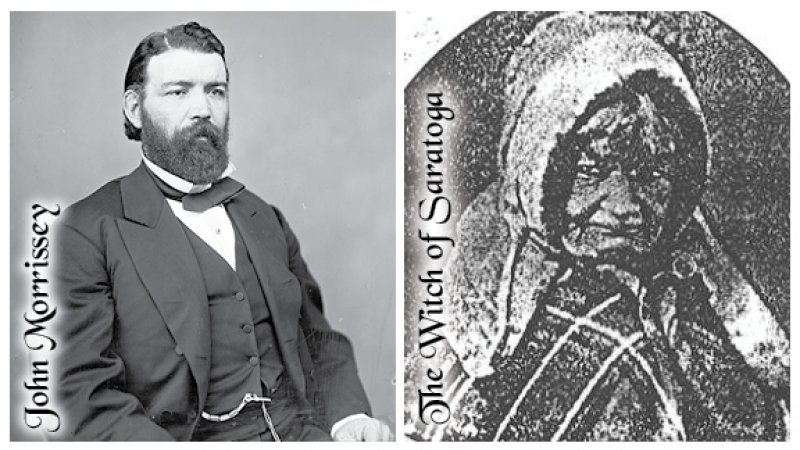 Saratoga is haunted.  Some say it’s with the memories of the wonderful characters who have built our city and others say those spirits are still with us in another form.  In either case, our history is replete with these outsized personalities.

Of course any discussion of these spirits would have to include John Morrissey whose ghost, it is rumored, roams both his casino, the current Saratoga Springs History Museum and the Adelphi Hotel, where he died of a heart attack on May 1, 1878.  Morrissey built his casino in 1870 after operating another in the city, creating Saratoga Racecourse and serving in the United States Congress.  He had a big career and a huge personality and perhaps it is that spirit that still haunts the city.

The TV show “Ghosthunters” paid a visit to the Museum several years ago and found all sorts of strange phenomena related to Morrissey. Excerpts from the show can still be seen on YouTube.  Even the Adelphi has had reports of his presence over the years.  A former cocktail waitress who worked there many years ago reported that a man staying in Morrissey’s room came down to the front desk late one night demanding to be checked out because he felt someone sleeping in the bed next to him and could even see an indentation of that person in the mattress.

Another great spirit is Katrina Trask who is reported to roam the halls of Yaddo, her former family estate and current home of a vibrant creative community.

Guests have reported a number of ghost sightings on the grounds and in the mansion. The writer, Allan Gurganus outlines in great detail a number of ghostly experiences that he and other visitors have had there in the book “Yaddo—Making American Culture.” About one apparition he said: “A figure stood. Five feet tall, it looked smoothed and faceless...somehow human.... This guardian spirit had some long proprietary claim on this, her room.” Years later, in Manhattan, he met several fellow Yaddo alumni and shared similar experiences.

The story of Angelina, “The Witch of Saratoga” is one that has fascinated the community for hundreds of years. The British general who lost the battle of Saratoga was Anthony Burgoyne. He came to the colonies in the early 1770s and brought his mistress; a young girl named Angelina, then age 16. When he was defeated by General Gates and his colonists (which most historians say was the turning point of the American Revolution), he planned to leave Angelina and in a fit of rage, started to strangle her. He did not ultimately kill her but did cut off blood to her brain leaving her mentally challenged. She escaped to the village of Saratoga and built a hut where she lived for many years. She used to walk around town with cards saying, “Your fortune for a penny.”

There have been apparitions of Angelina years after her death. On a hill north of the town called Angelina’s Hill, there have been several sightings. In the Spring of 1955, there was a man named Carradine staying at Yaddo who wrote of his experience. He was driving north of the town to admire a sunset and got out of his car to climb Angelina’s Hill. Halfway up the hill, a fast-moving thunderstorm moved in, and he sought shelter under an overhanging rock.

He reported that he was in darkness in the rain when a flash of lightning lit the top of the hill. A lone figure was standing on the stone ledge at the top, silhouetted against the sky. She stood erect, arms stretched out to the raging sky. Her long hair and wet cloak streamed out behind her. Then he heard her piercing scream above him. Another lightning bolt illuminated the woman. She repeatedly screamed as the lightning flashed, the thunder cracked, the rain fell, and the wind howled. Finally, the clouds moved away, the screaming stopped, and the woman vanished.

Is it just our collective memories of these great personalities that haunt us today or are the actual spirits “living” among us?  Every time I give ghost tours I hear stories from people who have had real experiences with these and the many other spirits of Saratoga.  Either way, Saratoga is a very fertile area for them.

Joe Haedrich is the author of Haunted Saratoga. He gives ghost tours of Saratoga Springs every Friday and Saturday from May-October. For more, visit HauntedSaratogaTours.com.