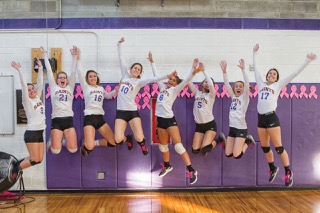 [All photos by www.PhotoAndGraphic.com]

Coach Maria Izzo started the evening with honoring all of the seniors on the team, including Cambridge’s seniors, with flowers and kind words.

“This group of eight people has been a fun group. They get along so well, laughs are nonstop, and there’s nothing better than a team that connects. If they connect off the court, they’ll connect on the court,” Izzo said of the team.

Each senior girl has a buddy on the team, who is either a sophomore or junior that they mentor for the season.

The seniors are Grace Fornabia, Ani Crocker, Olivia Lawrence, and Mandy Bartoszek. Fornabia and Crocker are co-captains of the team.

Fornabia now holds the season and school record for number of kills. Fornabia makes it look effortless in her abilities, seeming to take her opponents by surprise every time.

“Grace is a one of a kind and has been a catalyst for the past couple of years. These girls have been a pleasure to coach and even more to watch them play very well together. I’m very proud of them and I will miss them,” Izzo said.

More in this category: « Still Undefeated Blue Streaks Dominate »
back to top