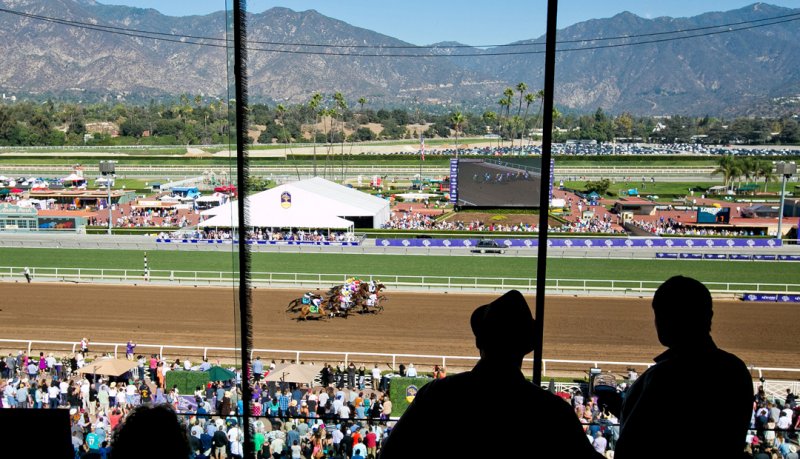 This year’s Breeders’ Cup races will be held over two days – Friday, November 5 and Saturday, November 6 at San Diego, California’s beautiful Del Mar Thoroughbred Club and it will have a Saratoga connection. Del Mar is often mentioned in the same breath as our own Saratoga Race Course when it comes to good racing amid a beautiful setting. Due to its beautiful location, Del Mar’s motto has been “Where the Surf Meets the Turf” since it was founded by crooner Bing Crosby in 1936. This year it hosts the Breeders’ Cup which will feature many horses that ran at Saratoga this summer.

The Breeders’ Cup series of races spans two days of racing at varying distances, surfaces and categories. This years’ event will feature 14 races for total purses of more than $31 million. The five races featuring two-year-olds will be run on Friday’s card which is dubbed “Future Stars Friday.” The remaining nine races for older horses will be run Saturday November 6, with the $6 million Breeders’ Cup Classic ending the card with an expected post time of 8:40 p.m. The races will be televised live on NBCSN with the Classic being shown on NBC between 8 and 9 p.m.  Eastern Time.

The Breeders’ Cup event was first run in 1984 and was created to be a televised season-ending event much like the Super Bowl or World Series. Having initially eschewed television coverage for fear of giving away its product, racing found itself with a shrinking fan base and difficulty creating new fans.  The traditional stakes races were televised but predicting who would run and how much interest there would be in any particular fall stakes race proved difficult and not conducive to television promotion.  This was exemplified by Spectacular Bids’ walkover in the 1980 Woodward Stakes. A truly worthy television event required racing to guarantee a number of stars and span the course of a few hours. The Breeders’ Cup was therefore designed to act as a season-ending championship event with races in every racing category. The event was originally meant to rotate among North American race tracks, and it did so in its early years; however in recent years, due to a myriad of factors including weather and politics, it has alternated between California and Kentucky for the past decade.

The event is a mixture of racing and entertainment personalities and diversified ownership groups. Celebrity chef Bobby Flay has an entrant in the Juvenile Filly Turf on Friday – the aptly named Pizza Bianca and the Europeans’ connections tend to bring large entourages on the trip. With the race on the West Coast there will be an assortment of Hollywood entertainers in the high-priced seats and continuing controversy surrounding charismatic trainer Bob Baffert. The negative publicity about medication violations in a number of Baffert-trained horses has led Breeders’ Cup officials to subject his runners to additional prerace testing as a condition to their entry into the races. Baffert has entered eight horses in the 14 races including Kentucky Derby winner Medina Spirit in the Classic and Filly Sprint favorite Gamine.

While the humans surrounding the sport give the interviews, it’s really about the horses. As is true with most North American race tracks, the best place to watch horses rather than people is the grandstand (where I will be) and there is no shortage of talented runners to view. This year sees several equine stars who will be short odds to eclipse their respective fields and claim champion status in their respective divisions.

The favorite in the Classic will be Knicks Go who has been outstanding this year winning his races from start to finish while going largely unchallenged. Like many entrants this will be his last race before entering the breeding shed. His main contender will be Belmont, Jim Dandy and Travers winner Essential Quality who will also be making his last start. A win by either would clinch the Horse of the Year title. They are both trained by leading trainer Brad Cox.

Should there be in upset in the Classic – the mare Letruska who is undefeated this year after beginning her career in Mexico could be declared Horse of the Year with a win in the Distaff run earlier in the day.

Saturday will also see short-priced favorites in Life Is Good in the Dirt Mile; Gamine in the Filly and Mare Sprint and Jackie’s Warrior in the Sprint. All possess superior speed. Notably all of the above-named horses ran well at this year’s Saratoga meet as did numerous other runners competing over the two days. In many ways this year’s Breeders’ Cup event acts as a continuation of this year’s Saratoga meet.

In contrast to the dirt races which will highlight short-priced favorites, the grass races are traditionally some of the most wide-open races with numerous Europeans lured to the United States by the purse money and prestige. European runners have performed extremely well in these races in most years but can find the California surfaces too firm for their liking at times. As an example of the scope of the event, there are 56 foreign horses from eight different countries entered to run.

All in all it’s a two-day flurry of first class racing at a first class facility that will determine division championships and define the racing year. Well worth the watch.

Read 804 times
More in this category: « Veteran's Day... Honoring Those Who Serve
back to top