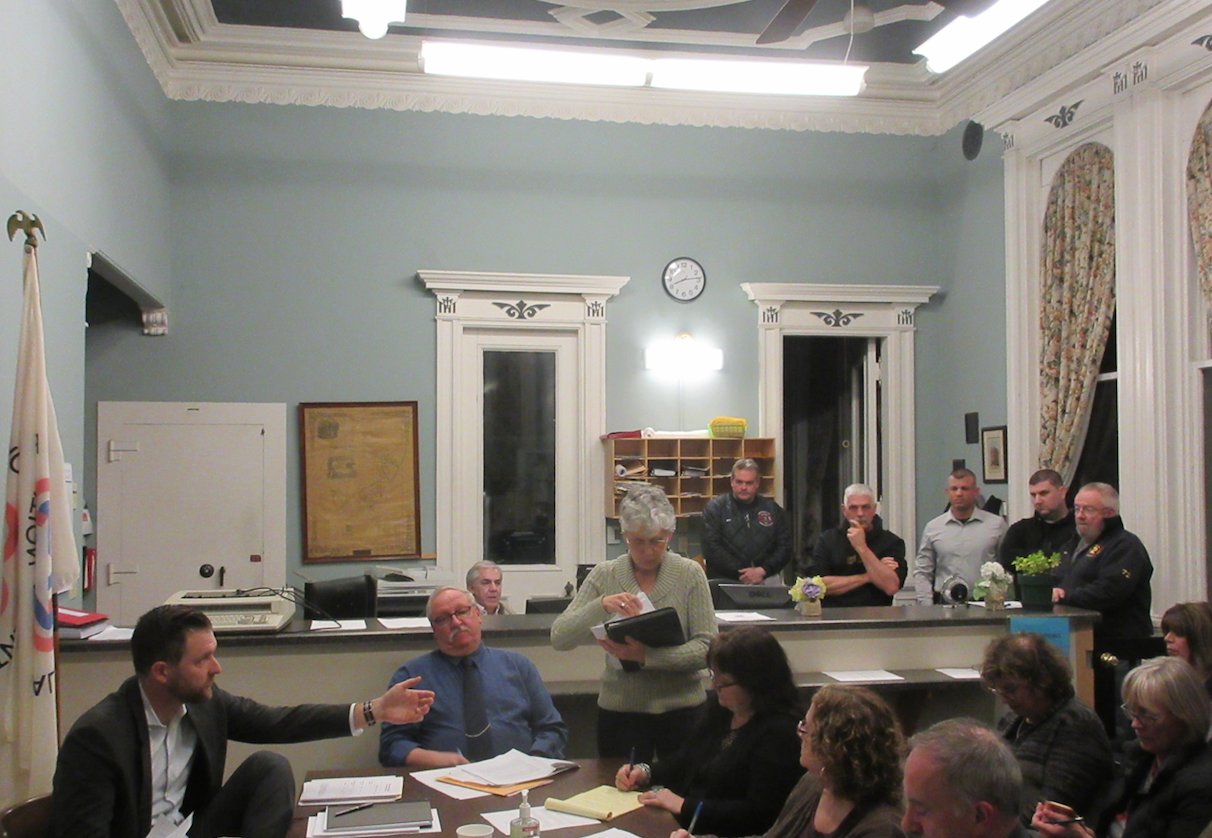 BALLSTON SPA – In a crowded Village Hall meeting room on Monday, Mayor John Romano fended off the symptoms of a cold as much as the public ire that resulted recently from a proposed 26 percent hike in property tax rates for the next fiscal year.

“If you think the village tax rate is going to increase by 26 percent, it’s not going to happen,” Romano insisted at the outset of the meeting, noting how the five-member village board has the ultimate say before the 2018-19 budget gets passed.

A public hearing on the proposed $4.3 million spending plan was set for 7 p.m. on Monday, April 9 at the Veterans of Foreign Wars post in Ballston Spa.

In his March 20 budget letter submitted to the mayor and trustees, Village Treasurer Christopher Hickey referred to a 5 percent increase in expenditures.

“We will continue to experience many challenges in governmental financing and budgeting,” read the letter. It cited “dwindling state revenues, reduction in federal assistance programs and minimal growth of local revenues, coupled with increasing demands for services and increased costs.”

But it was the $356,942 “increase in real property taxes,” as Hickey wrote, that captured much of the attention this week.

“I call this a head-in-the-sand budget,” he said. “It doesn’t take a hard, honest look at the mismanagement that got us to this unfortunate place, to learn from those mistakes and to do things differently going forward. It doesn’t put any policies in place to avoid this predicament getting worse in future years.”

“This is a budget that keeps us on the downward trajectory toward real fiscal stress,” Shaw added.

Among other measures, Shaw proposed that the board should consider substantial increases to water-usage rates charged to customers outside of Ballston Spa. He said the village also should renegotiate its fire-protection contracts.

“Our fire departments are best in class, essential to the community. They are an asset, not a liability,” he said. “They should also provide the revenue that they can reasonably generate. We need to seize that opportunity to getting a better deal on the services our fire companies provide.”

Trustee Shawn Raymond, the newest member of the village board along with Shaw, called for better management and more transparency, including proper oversight from the state comptroller’s office.

During the public comment period, village resident Liz Kormos—after noting how she runs a strategic planning business—pointed out that Ballston Spa’s expenditures have exceeded revenues since at least 2014, by as much as $334,000 in one year.

Kormos offered advice to the board as well. “You cut everything you can without jeopardizing essential services,” she said. “You make a plan to minimize the impact on taxpayers.”

More in this category: « County Seeks Donations for Troops State Provides Details for Local Bridge Closures »
back to top