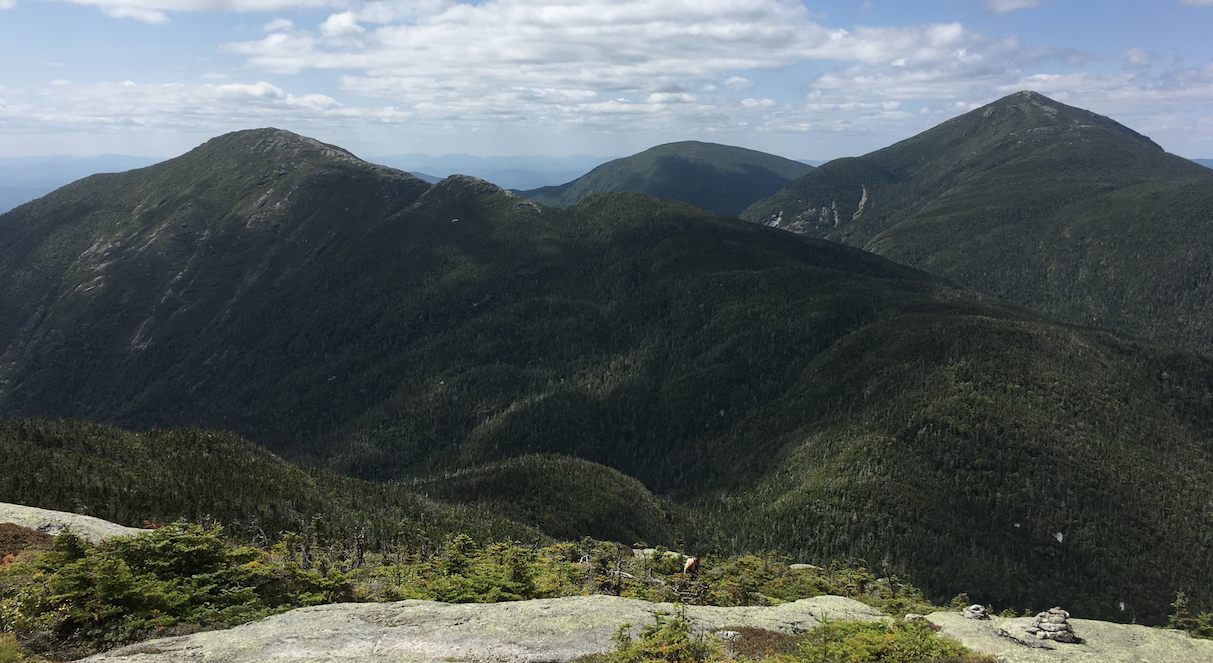 SARATOGA SPRINGS – Dozens of times in the span of five years, Scott Fultz and his son Elijah left their home in Gansevoort before dawn. They drove north to accomplish a feat together that challenges the most serious New York hikers: climbing all 46 of the Adirondack High Peaks.

On Sunday, Aug. 27, the pair officially reached that goal atop the 4,827-foot summit of Basin Mountain, along with trusted canine companions Abbey and Kona.

The weather was perfect and “it was a really cool father-son moment,” admits Fultz, a co-owner of the Saratoga Springs firm Mountain Media. At nearly 20 years old, the company (www.mountainmedia.com) specializes in website design, e-commerce and Internet marketing.

On the same day in August 2012, the Fultzs and Abbey hiked the 5,344-foot Mt. Marcy, long revered as New York’s tallest mountain. Fultz said he and Elijah (who was 11 at the time) resolved during that trip to climb all of the High Peaks.

Fultz added that he and his wife, Jeanette, had climbed about 10 in prior years.

According to records kept by the 46er Club (posted online at www.adk46er.org), the actual number of people who have climbed the High Peaks and then formally registered is approaching the 10,000 mark.

Fultz acknowledged that he and Elijah each sent the required documents to the 46er Club with a $10 registration fee. The father also kept detailed records about every hike and signed, for safety purposes, the New York State logbooks found at all trailheads.

The 46ers Club, whose origins date back to the 1920s, presently coordinates Adirondack trail-preservation and maintenance efforts in conjunction with other groups and officials from the state Department of Environmental Conservation.

Club members are busy organizing a centennial hike on all 46 mountains—with parties of six individuals each—the weekend of Aug. 3-5, 2018 to commemorate the date that two brothers, Robert and George Marshall, and their guide Herbert Clark reached the 4,867-foot summit of Whiteface Mountain in 1918 and began keeping records.*

Lacking cars and modern hiking gear, as well as the easy access afforded by today’s well-worn mountain trails, it took the Marshalls and Clark seven years to finish the High Peaks with a climb up 4,040-foot Emmons Mountain in 1925, according to the 46er Club.

Furthermore, the U.S. Geological Survey measures a 47th peak, MacNaughton, at 4,000 feet, but the 46ers Club does not require its members to hike it.

“As an avid mountaineer myself, I wish to congratulate Scott on this awesome accomplishment,” offered Mountain Media co-owner James Curley, in a statement released this week. “The fact that he included his son and dog on the mission speaks to his character and makes me proud to call him a partner.”

With presumably anticipated flair, the company was described in the statement as “a progressive, personable, ecommerce website services provider that offers online payment solutions as well as custom graphic design and digital marketing services that don’t require a mountain of cash.”

*Due to an editing error, a previous version of this article incorrectly listed the date of Aug. 1 for the 46ers' commemorative hike. For more information, visit www.adk46er.org.

[Readers are encouraged to submit respecful comments regarding the article below.]