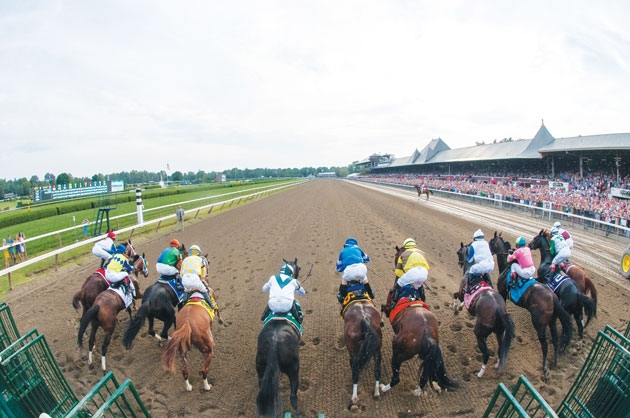 SARATOGA SPRINGS — This year may be one of the most exciting Travers week yet with a number of events and celebrations leading up to the famed Mid-Summer Derby next Saturday, as well as the showdown of three of thoroughbred racings’ top contenders this year—Kentucky Derby winner Orb, Belmont top finisher Palace Malice and Haskell Invitational winner Verrazano—all scheduled to race in the million dollar Travers Stakes.

Considered one of the most prestigious racing events, the Travers was named for William R. Travers, one of the founders of Saratoga Race Course, and whose horse, Kentucky, won the first running of the race in 1864.

The 13th Annual Travers Celebration, which is the official party of the Travers, will be held on Thursday, August 22 from 7:30 to 11 p.m. The gala helps fund the Backstretch Employee Service Team (B.E.S.T.), the Permanently Disabled Jockeys Fund and the Times Union Hope Fund.

This year’s gala is honoring three-time Eclipse Award Outstanding Jockey winner Ramon Dominguez, who retired in June after doctors advised him not to race again due to the injuries he sustained in an accident at Aqueduct in January. During his career, Dominguez won 4,985 races and earned nearly $200 million in purses.

At the celebration event, an elaborate cocktail reception will feature a number of exquisite food stations and beverage offerings and there will be dancing to live music from the New York Players. The evening will also include a silent auction.

The 2013 Travers Celebration is co-chaired by Hearts Publishing magnate George R. Hearst III and Ramon’s wife, Sharon.  The event has raised more than $1 million for non-profit organizations in the Thoroughbred industry and throughout the greater Capital Region since its inception over a decade ago.

Founded in 1989, the Backstretch Employee Service Team is a nonprofit organization which provides free health and social services to the backstretch communities at Aqueduct Racetrack, Belmont Park and Saratoga Race Course.

The Permanently Disabled Jockeys Fund (PDJF) is a not-for-profit public charity that provides financial assistance to some 60 former jockeys who have suffered catastrophic on-track injuries. Since its founding in 2006, the fund has disbursed over $5 million to permanently disabled jockeys, most of whom have sustained paralysis or brain injuries. To continue its mission the PDJF relies on donations and support from the horse racing industry.

The Times Union Hope Fund, a component fund of The Community Foundation for the Greater Capital Region, raises money and awards grants to after school and summer programs serving at risk children in Albany, Schenectady, Rensselaer and Saratoga counties.

The 144th edition of the Grade 1, $1 million Travers will be run on Saturday, August 24. For up-to-date information on the Travers Celebration and other special events, please visit www.nyra.com/information/saratogaevents.

The prestigious Alabama dates back until 1872, making it the oldest race for fillies in the nation. It has continually attracted some of the top fillies in training, including the last three Eclipse Award winners, Questing, Royal Delta and Blind Luck. Deborah White of Gansevoort will get to take home the full on-track winnings from a $15,000 wager as the next winner of the 150 Celebration event sponsored by Marylou Whitney and John Hendrickson if she picks the right filly in the Alabama. The 39th running of the Grade I $600,000 Sword Dance Invitational will also be on Saturday, August 17, for three-years-old running 1 ½ miles on the turf.

Take a piece of Saratoga home with the popular Saratoga Race Course Baseball Cap, free with paid admission, while supplies last. Explore the Uniquely New York Marketplace on-track market featuring 13 food and artisan vendors with products made exclusively in New York State. The market will be held each Sunday of the meet from 10:30 a.m. to 5 p.m. in the event tent, near the Carousel, inside the entrance to the Reserved Seats Box Office on Union Avenue. Watch the Grade II Woodford Reserve Lake Placid, 1 1/8 miles on the turf. Post time 1 p.m.

Approximately 40 restaurants and eateries throughout the greater Capital Region will offer special pricing and menus in celebration of the crowned jewel of the Spa racing season during the fourth annual Travers 1864 Restaurant Week. From Sunday, August 18 through Thursday, August 22, diners have the opportunity to indulge in a three-course meal at participating restaurants for the prix-fixe cost of $18.64, the year of the inaugural running of the Travers, the oldest major stakes race in the country for 3-year-olds. For a complete list of participating restaurants and to view the prix-fixe menus, please visit www.nyra.com/travers1864.

An all-new attraction for the 2013 meet, Taste NY at Saratoga Race Course is held each Sunday of the racing season from 10:30 a.m. to 5 p.m. Located at the event tent inside the entrance to the Reserved Seats Box Office near the Carousel, the lively market features numerous vendors and artisans offering products made exclusively in New York State.

The day’s feature race is the Grade II Woodford Reserve Lake Placid for 3-year-old fillies on the turf.

Fans will have the opportunity to get the third set of “History of the Game” Saratoga Trading Cards – the new collectible item for the 2013 meet. The trading card set honors a number of the most memorable thoroughbreds, trainers, jockeys and races to have been associated with Saratoga Race Course over the past 150 years. The commemorative Saratoga trading cards will be distributed in packs of 10 over the course of four days throughout the meet for a total of 40 collectible cards. A limited run of 10,000 complete sets will be produced for the 2013 meet.

Beginning Monday, racing fans will have the opportunity to win a BALL Watch timepiece worth approximately $10,000. The watch is courtesy of BALL Watch USA and Northeastern Fine Jewelry, the official timepiece and jeweler of Saratoga Race Course. Entries will be accepted at ballwatchusa.sweptin.com/giveaway through August 31. The winner will be selected via random drawing.

Concerts in the Park

Every summer, the Saratoga Springs Heritage Area explodes with activities for all. A popular happening is the Summer Concert Series. Free concerts are held from 7–8:30 p.m. in historic Congress Park at the War Memorial directly across from the Canfield Casino. www.saratogaspringsvisitorcenter.com

Have fun learning the dance that became a social sensation in the era that racing began as well as the history behind it. The cakewalk will be held in association with the concerts in Congress Park from 7 – 8:30 p.m. Hosted by the Saratoga Springs Heritage Area Visitor Center. For more information call (518) 587-3241. The event will be held at the Saratoga Springs Heritage Area Visitors Center, across from Congress Park.

With Traver’s a week away, the fun is just getting started at Saratoga Race Course. On Wednesday, August 21, will be a Stewart’s Ice Cream Eating Contest. The coolest way to beat the summer heat, racing fans will come to the Spa spoon-in-hand as they prepare to compete in the ultimate in chilly contests – the Stewart’s ice cream eating contest. Registration is at noon at the Jockey Silks Room and contestants will be divided into three age groups—kids, teens and adults—as they battle to see who can down a pint of ice cream the fastest. The winner will receive gift certificates for free ice cream courtesy of Stewart’s Shops.

The History of Racing at Saratoga

The History of Racing at Saratoga, presented by award winning author William Nack is part of the Alfred Z. Solomon Charitable Trust Program Series. The program will be held at the Canfield Casino in Congress Park and is sponsored by the National Museum of Racing and the Saratoga Springs History Museum. For more information call (518) 584-6920.

The Travers Celebration is the only evening affair at Saratoga Race Course will return to celebrate the 144th edition of the Mid-Summer Derby on Thursday, August 22 from 7:30 p.m. to 11 p.m. Tickets are available for $175 per person and $125 for young adults (under 30). Tables may be reserved for $2,500 per table of 10, which includes complimentary wine. Tickets are available for purchase online at www.2013traverscelebration.eventbrite.com or by phone at (518) 383-6183.

Battle of the Brews

Saratoga Race Course will play host to the area’s best brews as adults enjoy the ultimate in beer tasting during the 16th Annual Battle of the Brews. All proceeds benefit the American Red Cross Adirondack Saratoga Chapter. Battle of the Brews will take place inside the entrance to the Reserved Seats Office near the Carousel from noon to 4 p.m. For only $35, you will be able to sample many of the region’s finest craft beers as you cast your votes for the best of the brews. You’ll also get to enjoy the excitement of Thoroughbred racing, with closed circuit monitors showing all the action and a NYRA wagering booth close to the event area. Tickets are $35 per ticket sold online, $40 per ticket sold at the gate day of the event. For group rates, please call Kara Livingston at (518) 694-5104 to purchase over the phone. Group rates are only available over the phone. Groups of 10 or more are $30 per ticket; groups of 25 or more: $25 per ticket. For more information or to buy tickets, visit www.redcross.org/news/event/Battle-of-the-Brews-2013.

The Mid-Summer Derby, dating back to 1864, is the oldest race for three-year-olds in the United States. The phenomenal day of racing also includes the Grade 1 Test Stakes, the Grade 1 Foxwoods King’s Bishop and Grade 2 Ballston Spa. Last year fans were treated to an historic event as Alpha and Golden Ticket hit the wire together to dead heat for the Travers victory. This year, Kentucky Derby winner, Orb, Belmont winner, Palace Malice and the million dollar Haskell winner, Verrazano, will face off in the one million dollar Travers.

Held on Travers Day, this fundraising event for Saratoga Bridges includes premium seating and hospitality with a delicious buffet and beverage service at The Carousel Restaurant. Ticket price includes one complimentary cocktail per person, general admission to The Clubhouse and a Post Parade Program. The event begins at 11 a.m. with buffet open from noon to 3 p.m. For more information call (518) 587-0723 or email This email address is being protected from spambots. You need JavaScript enabled to view it.. Cost is $135 per person.

More in this category: « Behind the Lens The Winner of the $15,000 Win Wager Adam McNeill Wins Big at the Track »
back to top