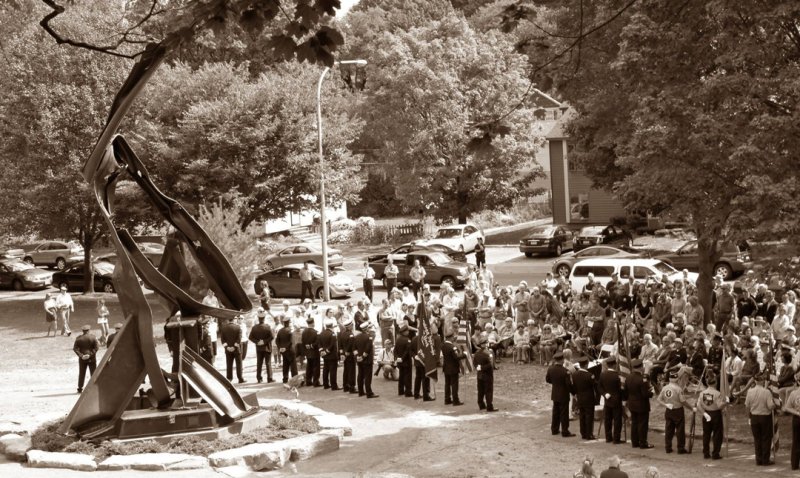 9/11 Memorial Film
Friday, Sept. 10 | 10 a.m.
Clifton Park-Halfmoon Public Library | 475 Moe Rd Clifton Park
Commemorate the 20th anniversary of 9/11 with this film presented by the 9/11 Memorial & Museum, highlighting first-person accounts of the attacks and their aftermath. Please also see exhibit in the foyer and café area of the Library on display until September 20.

Never Forgotten: Commemoration and Remembrance Ceremony
When: Saturday, Sept. 11 | 8:15 a.m.
Where: High Rock Park, Saratoga Springs
Mayor Meg Kelly welcomes all citizens to a Commemoration and Remembrance Ceremony. Gather at the Tempered by Memory Sculpture in High Rock Park on Saturday, Sept. 11. Ceremony will begin at 8:30 a.m., please arrive by 8:15 a.m. Ms. Dottie Pepper, CBS Sports will be the Master of Ceremonies. Frank G Hoare, USAR, Ret, will be the Keynote Speaker.

Saratoga-Wilton Elks Lodge #161's 2021 Flag Day Parade Commemorating 9/11
Saturday, Sept. 11 | 12 to 3 p.m.
Begins on North Broadway and ends at Congress Park
Saratoga-Wilton Elks Lodge No. 161’s 53rd Flag Day Parade will take place Sept. 11, at which time it will commemorate the 20th Anniversary of the 9/11 tragedy. Parade participants will march down Broadway in the City of Saratoga Springs starting at 12 p.m.
This year’s parade theme will be “Honoring Our First Responders.” The Elks plan to honor not only our brave local first responders who went to New York City to assist with search and rescue efforts after the Twin Towers fell, but also our community’s first responders who have been at the forefront of the local response to the COVID-19 pandemic, including medical personnel, public health officials, law enforcement members, and emergency services personnel.
The Elks are pleased to announce that the Avant Garde Drum and Bugle Corps will again reunite and be a key participant in this year’s parade.

Ballston Spa 9/11 Remembrance Event
Saturday, Sept. 11 | 7:30 to 8:30 p.m.
Ballston Spa Village Hall/ 9/11 Memorial Park
66 Front St Ballston Spa
On Saturday, Sept. 11 at 7:30 p.m. Ballston Spa holds its Annual 9/11 Remembrance Ceremony.
20 years ago, life in our country changed. Even in the quaint village of Ballston Spa, we had a new perspective on life. To remember those who we lost, the community of Ballston Spa came together to created its own 9/11 Memorial Garden, next door to Village Hall. The Memorial, complete with a section of the subway track that ran under the Twin Towers, is a treasured part of the Ballston Spa community.
This year’s ceremony is very special. The 20th Anniversary marks an important milestone for all Americans. To honor those who died in the attack and those who gave their lives trying to save others, Ballston Spa is planning a special ceremony.
The program will include music by the Union Fire Company Band, a dramatic light display and art banners, presentations by elected officials and a special candlelight ceremony. The event will be attended by the McBoston Fire Truck flying their massive American Flag and members of the local Fire Companies, Police and Ambulance Corp. Everyone is welcome to attend this personal small town event. Bring a chair. We will be following CDC guidelines. Rain date Sunday Sept. 12.

More in this category: « A First Responder City Notes »
back to top