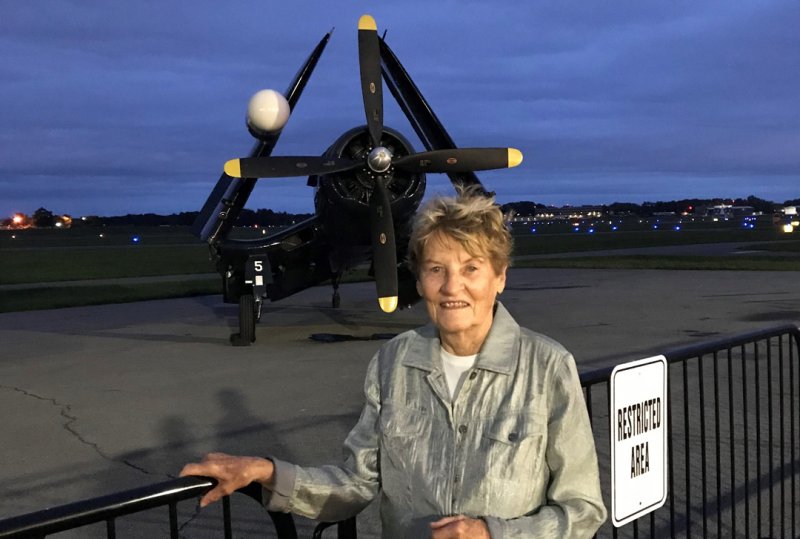 Rev. Dr. Barbara Floryshak posing for a picture after conducting a wedding ceremony at The Hangar at Albany International Airport last week.

SARATOGA SPRINGS — Barbara Floryshak remembers marveling at the view when her eyes scanned the landscape of the great city.

“Up at the top you saw all of New York City, the city in all its glory and vastness,” she says.

“There was a young lady visiting from Germany. I asked her, ‘Hey would you like to go over to the World Trade Center?’ So we went, got on the elevators, rode all the way to the top. When we were in the elevator, I remember telling her about the first time we had a bombing, in the garage.”

In February 1993, a terrorist bomb had exploded in a parking garage of the World Trade Center. Six people were killed that day and more than 1,000 injured. Later, the FBI would refer to the attack as a deadly dress rehearsal for 9/11.

“We saw the view, we came down, and I put her back on a plane. That was on Monday. On Tuesday was when 9/11 occurred.”

Rev. Dr. Barbara Floryshak served as a pastor at Tribes Hill Presbyterian Church near Amsterdam, NY and has served a part-time as Chaplain at the Albany VA.  Originally from Long Island and a Saratoga resident since 2006, while with the ministry she became a go-to person with people visiting from Germany.

“I became their guide to New York City, because I knew the city back-and-forth having graduated at NYU,” she says.  Floryshak had lived in Germany for a spell, where she has a familial background. “I was almost stuck behind the Berlin Wall in 1961 – but that’s a whole other story.”

On Sept. 12, 2001, she returned to the Trade Center.  “It was a day later. I went down and responded to the area for people who lost somebody and needed help spiritually,” says the retired Presbyterian minister.

“The subway was bombed out, so I had to take a bus from Grand Central. It was terrible. You’d just see a white cloud with all this stuff floating around. Nobody was wearing masks or anything. And it was heartbreaking to see where the building used to be, not being there. It’s hard to explain.”

Hundreds of rescue workers descended upon Lower Manhattan searching for survivors and sorting through the ruins.

Floryshak stayed at the Marriot Hotel near Ground Zero for several days. “They were using a church, an Episcopal church there, for recovering the bodies, I think it was. It was a terrible scene. I was trying to help people emotionally and spiritually – the first responders, the people from the families,” she says. “I was with a priest down there and I remember him saying: the hardest thing is to give counseling to the families of people who just jumped out the window. He was having a hard time, too, just trying to give some comfort, because how this all happened, it doesn’t make any sense.”

Floryshak’s son worked downtown. He was able to make it out. His best friend with whom he graduated from Syracuse that year, did not. He worked on the 100th floor. “He was supposed to go to his friend’s wedding the next week. Instead, he had to go to his funeral. His best friend. When I go down there now, I look for his name.”

In the 20 years since the attacks of 9/11, memorials have been sited across the country. In Saratoga Springs, at High Rock Park, stands the 25-foot-tall sculpture titled “Tempered By Memory.” Commissioned by Saratoga Arts and created by artists Noah Savett and John Van Alstine, it is comprised of five twisted pieces of Trade Center steel. Four pieces came from the North Tower, one came from the South Tower. It is not an easy memory. After much public and political debate of potential sites that varied from the City Center to the Visitors Center, the sculpture stood in a field in Northumberland awaiting a permanent location in Saratoga Springs.  It was eventually placed at High Rock Park in 2012.

Floryshak has since made several trips from her upstate home to downtown Manhattan. “There was an organization for people who lost their loved ones and First Responders, and I became a part of a group. They got together once a year, so every year I kept on going down,” she says.

On the first anniversary of the attacks, she befriended a woman who explained she had lost her son who was working on one of the upper floors in one of the towers. A requiem was sung for the people who had passed away. A memorial gathering was being staged. “It was in the morning and when I started walking down the street, suddenly I couldn’t walk. The wind was so terrific it stopped me in my tracks. It was the same time, the same day, one year later. I said to myself: what is going on? Eventually I got on a train and went back to Albany. The very next day I picked up the paper and there it was. It showed all the people around doing the ceremony, but the wind was blowing so hard things were flying all over the place.”

At Ground Zero, while the families of the victims crowded deep in the pit around the Circle of Honor while all 3,000 names were read aloud, the wind slipped over the sides and whipped the dust into a thick cloud that billowed all through the complex, eerily replicating the smoke that hung in the air a year before,” wrote Charles Shaw in 3 a.m. Magazine.

“When I picked up the newspaper the next day and looked at the picture, the caption read: ‘Are Those The Lost Souls Coming Back?’ Floryshak says. “For people who are not involved spiritually, it maybe doesn’t matter. But to me? It meant a lot.”

Floryshak deals with lingering physical effects she says from the time she spent at Ground Zero. “I had cancer in the lung. In 2011 I went to Dana-Farber in Boston. They took out a lung. It’s connected to my time there, it’s all a result. So now this year they’re working to give me radiation and I’m just trying to find out if I have some more cancer in it, so I don’t know if this is kind of the end or what,” Floryshak says. “I yell at myself: ‘Why did you go down there?’ And then I snap back: ‘You went down there to help out,’ so I have to put it aside.”