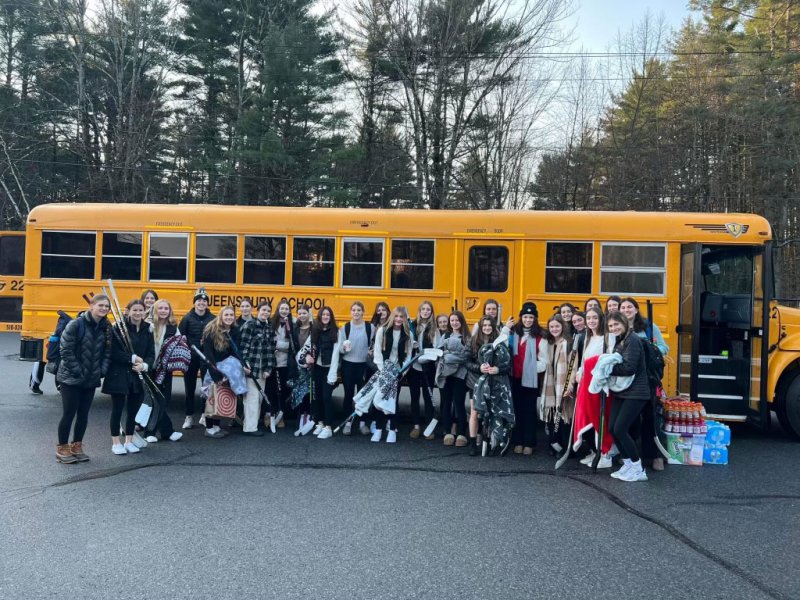 SKANEATELES — The Adirondack United girls hockey team opened its inaugural season on Tuesday and made a statement, defeating defending state champions Skaneateles 2-1 in overtime on the road.

“I really wanted them to go out there and compete,” said United head coach Jeff Willis. “It’s a group where a lot of them have played very competitive games at a fairly high level, so they’re ready for that type of pressure. They handled it really well.”

The team is made up of a combination of players from Saratoga Springs, Glens Falls, South Glens Falls, Hudson Falls, Queensbury, and Corinth High Schools. As the only varsity girls hockey team in Section 2, the United squad is competing in Section 7 this year in addition to non-league contests against teams such as Skaneateles.

The Lakers scored first roughly halfway through the first period, with Kendra Garlock burying a feed from Scout Oudemool to give Skaneateles a 1-0 lead.

“It was kind of interesting, they were relatively quiet in the locker room,” Willis said of the first intermission. “They’re intense, and they’re not used to losing.”

The United squad came out of the gates firing in the second period, and tied the game just four minutes into the middle frame on a goal from sophomore defenseman Jenna Amodio. Willis called the tying goal “a great individual effort.”

“She carried the puck through the neutral zone, kind of angled wide, cut underneath the defenseman and came across and tucked it in on the other side,” said Willis. “It was the tail end of a power play, but it was a real nice individual effort more than anything else.”

Tekla Fine-Lease picked up an assist on Amodio’s tally, the first goal in Adirondack United team history. The team outshot Skaneateles 16-2 in the second period, and Willis said he expected the strong response from the team.

“We went out there, and we really outplayed them in the second period, and we scored to tie it up,” Willis said. “They’ve been through this a little bit at the club level, so when they do things like that it’s not surprising to me at all.”

United goalie Ava Reynolds made 11 saves in the third period, while the Lakers’ Isabelle Wells stopped nine shots, sending the game to overtime. Willis said the team had built confidence after the strong second frame.

“From that point forward, the nerves were out, we were kind of dictating play and doing the things that we really do well,” said Willis. “I think they felt really good about their chances in overtime. We continued to force play, and that’s kind of what happened.”

After junior forward Bayley Duffy forced a turnover in overtime, the puck found Amodio at the point, and her shot was redirected home by freshman Gianna Marcantonio, giving United a 2-1 win in overtime.

“We might as well have won the state title at that point,” Willis said of the ensuing celebration. “They all jumped the boards and went over to get Jenna, everybody thought Jenna had scored. They didn’t realize that (Marcantonio) had that little tip to the far side.”

And after opening the season with a win against the defending state champions, Willis said, “I’m sure that we’re not going to sneak up on anybody at this point.”

Wells made 27 saves for Skaneateles in the loss. Reynolds stopped 17 shots for Adirondack United, who will play their first-ever home game at 1 p.m. Saturday, hosting Section VII’s Beekmantown at the Glens Falls Rec Center.

“The first home game, girls are going to be excited,” Willis said. “I expect that there’s going to be a full house, and there’s not going to be much that I’m going to need to do to get the kids excited to play. They’re going to be ready.”

Read 773 times
More in this category: « Saratoga Swimmers Compete at States ‘We All Believed In Each Other’: Saratoga Boys’ Cross-Country Caps Off Successful Season »
back to top