Athlete of the Week: Nick Palso 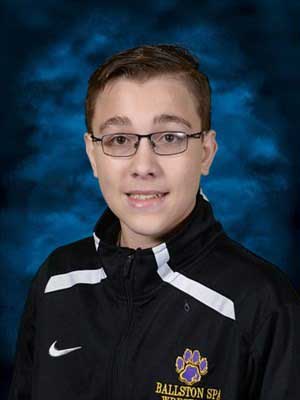 Nicholas Palso, a junior at Ballston Spa High School, has just had his 100th win and recently won at the Saratoga Invitational. Palso is currently 25-2 and wrestling in the 106 bracket.

Palso has been wrestling on varsity since 8th grade after only spending one season before on modified.

“Our team is doing great this year! I’m surprised at how well we’re doing,” he laughed.

“I was thinking we wouldn’t be as good as we are but the guys I’m wrestling with are really good.”

Their team is young, so expectations weren’t too high at first.

“We have a lot of freshmen,” Palso clarified.

Palso doesn’t think anything about wrestling is hard, even the eating to maintain his weight, which he maintains by eating “mostly chicken” and by working out.

He does admit to missing desserts and can’t wait to indulge in his favorite ice cream, mint cookie crumble from Stewart’s, once the season ends

Palso was immersed in the sport through going to some of the home matches when he was younger with his dad; his grandfather also wrestled.

“At those matches, I fell in love with the sport,” he said.

Palso does not play anything else, focusing solely on wrestling and in the off season he trains and lifts to stay in shape.

He still manages to keep up on his schoolwork by doing his homework before and after practice, whatever it takes as he would like to attend college and wrestle at a collegiate level also.

In his free time, he hangs out with his friends and they play video games.

He cites his dad, Nicholas Sr., as his biggest supporter, “he’s always at my matches and is always the one who brings me to my practices and tournaments.”

Palso is appreciative of his coaches and his teammates.

“My coaches are great, they’ve helped me get through some good and bad times,” he said.

Login to post comments
More in this category: « Local All Star Moments Local Athletes All-Star Moments: Jan. 10-16, 2020 »
back to top