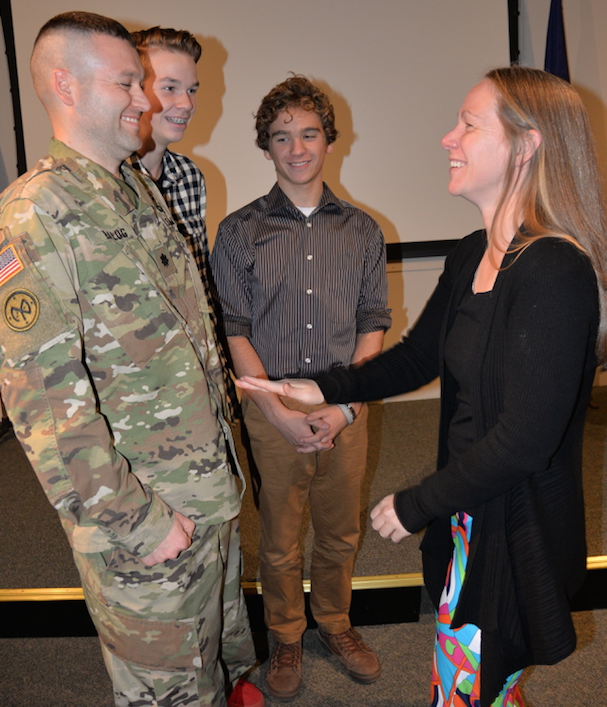 SARATOGA SPRINGS – New York Army National Guard Major Todd Balog, an Afghanistan veteran with more than 16 years of active and Guard military service, received his promotion to the rank of lieutenant colonel in a Dec. 8 ceremony at the New York State Military Museum.

Balog currently serves as the commander of the 369th Special Troops Battalion, headquartered in New York City. He also serves full time on the Joint Staff in the New York National Guard headquarters as an active guard and reserve officer assigned to the Joint Training and Exercises Division in Latham.

In August 2001, Balog received his commission as a second lieutenant in the U.S. Army from the Michigan State University Army ROTC program. Following the Armor Officer Basic Course and Scout Leader Course at Fort Knox, Kentucky, he served on active duty with the 11th Armored Cavalry Regiment in Fort Irwin, California as an armor platoon leader and later as protocol officer for the Army's National Training Center.

In September 2007 Balog joined the New York Army National Guard where he has served as an operations officer in the 42nd Infantry Division, Aide-de-Camp to the division commander, headquarters company commander and division secretary of the general staff.

He deployed to Afghanistan for a combat tour with the Headquarters Company, 427th Brigade Support Battalion, as a base closure team leader in Regional Command East. In February 2013, upon return from Afghanistan, Balog returned to Troy and served as the 42nd Infantry division headquarters battalion executive officer. In November 2015, he was assigned to the Joint Staff in the New York National Guard headquarters in Latham, where he served as the state partnership program director until February 2017.

Lt. Col. Balog resides in Saratoga Springs with his wife, Amy, and sons Hyrum and Aiden.