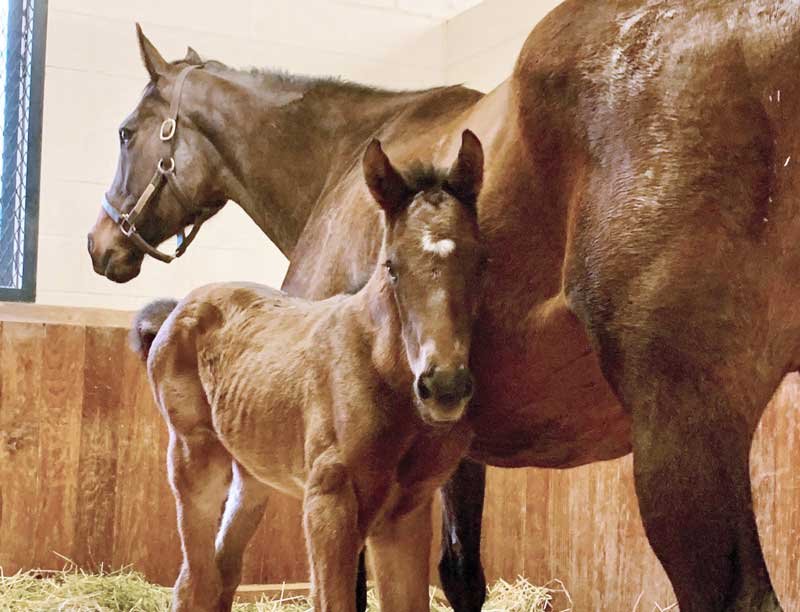 CHARLOTTE, VT/SARATOGA SPRINGS — Magical World, a 9-year-old mare owned by Three Chimneys Farm, delivered a colt by stallion Gun Runner at 2:20 a.m. on Feb. 25 at Three Chimneys as part of the National Museum of Racing and Hall of Fame’s Foal Patrol Season 3. This is the first foal of the season delivered on Foal Patrol. Both the mare and foal are healthy and doing well.

Magical World, a daughter of Distorted Humor who has already sired Grade 1 winner Guarana and listed winner Magical Dance, delivered her Gun Runner colt 11 days after her expected foaling date of Feb. 14. There are six mares participating in Foal Patrol Season 3. Both New Money Honey (in foal to War Front at Indian Creek Farm) and Hall of Fame member Ashado (in foal to Frosted at Godolphin’s Gainsborough) are due any time. The other mares this season include Vaulcluse (in foal to War Front at Gainesway Farm), Alpine Sky (in foal to More Than Ready at Old Tavern Farm), and Emotional Kitten (in foal to Dialed In at Denali Stud). Gun Runner, the 2017 Horse of the Year, is also a participant this season.

Foal Patrol is a one-of-a-kind interactive web project. Season 3 features a collection of live cameras where people can view real-time streams of several mares and their foals and the stallion Frosted. The live camera feeds will be available according to each horse’s daily schedule, set by the farm. For more information, please visit www.foalpatrol.com.

For more information about the National Museum of Racing and Hall of Fame, including special events and program offerings, please call 518-584-0400 or visit www.racingmuseum.org.