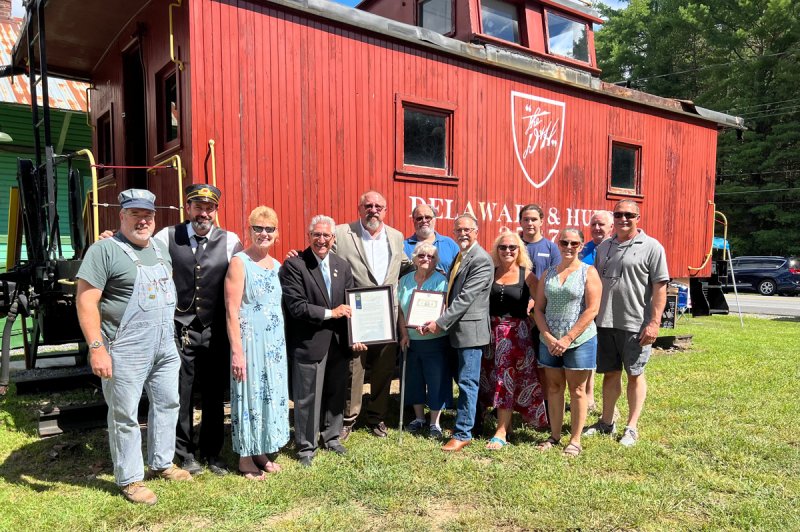 GREENFIELD — The Town of Greenfield presented the family of former Town Supervisor Glen Hammond with an official Proclamation of Recognition and Appreciation for his role in purchasing the town’s historic caboose, located at Kings Station Park. The presentation took place at the 12th Annual Caboose Day and Car Show at Kings Station Park in Porter Corners, N.Y. on Saturday, August 13. Town officials, members of the Glen Hammond family, New York Senator James Tedisco and members of the community were present to celebrate.

Visitors of Kings Park, located at the corner of Route 9N and Porter Corners Road, annually celebrate its significant role the railroad had while forming the town of Greenfield. A history that dates back to the late 1800s. The Adirondack Railroad, which later became Delaware & Hudson Railroad, ran mostly tourists back and forth to the Adirondacks but also serviced the lumber and paper industries. The Annual Caboose Day Celebration features a cookout, bake sale and car show and benefits the Greenfield Historical Society. Historians are also on hand to bring the landmarks to life and provide a historical context.

“Town Supervisor Glen Hammond gave us something very special and really never received enough recognition for it,” said current Town Supervisor Kevin Veitch. “This more than 100-year-old caboose has become one of Greenfield’s landmarks representing an important piece of our town’s history and we are very thankful he had the idea to bring it here.”

The 1919 caboose was purchased by Supervisor Hammond for the Town of Greenfield from Delaware & Hudson Railroad for $1 in 1988. The framed proclamation featured a dollar bill meant to repay his family for the generous gift. Hammond served as a member of the Greenfield Planning Board for seven years and served two terms as Town Supervisor from 1984-1988. He was a highly decorated Korean War veteran and an extremely active community servant until his death at the age of 75 in 2006.

By 1990, the caboose was moved to its current site, near the historic Adirondack Railroad Station. In 2006, the caboose was struck by a vehicle and many community members proudly banded together to restore it piece by piece. There is a video showing its reconstruction in a time-lapse video on the Historical Society’s website at www.greenfieldhistorialsociety.com. The caboose restoration ended in 2010 and it comes to life each year at the annual Caboose Day celebration.

“My father was civic-minded and always passionate about doing his very best for the Town of Greenfield,” said his son, Malta Town Supervisor Mark Hammond. “We are so elated about this special recognition for this very same reason.”

More in this category: « Ballston Spa Board Of Education Meeting Rescheduled Disability Rights Education Event »
back to top