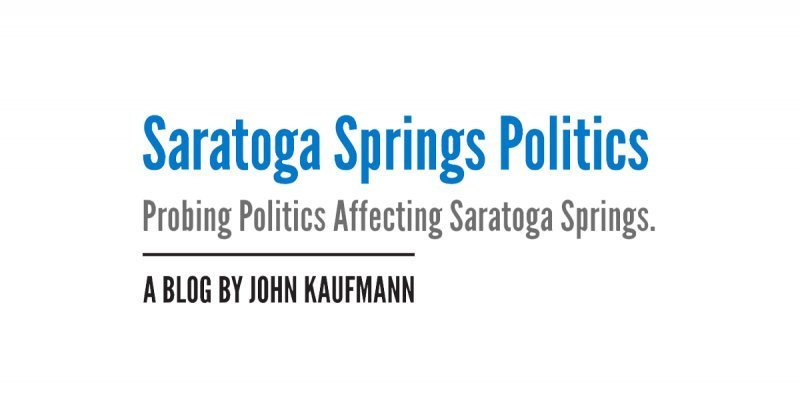 With little notice, Saratoga Springs Accounts Commissioner Dillon Moran has put on his agenda for Tuesday night's (December 6, 2022) City Council meeting a resolution that will raise the salaries and benefits exclusively for the five city Deputies. I am certainly not opposed to fairly compensating employees, but his resolution is disturbing for a number of reasons:

2. The increases in salary and benefits are only for political appointees, the deputies.

3. There is no rationale for these salary and benefits increases

Past Councils traditionally addressed Deputy salaries and benefits in an annual resolution passed well before the city budget was adopted, as those figures would have to be included in projecting city expenditures. Commissioner Moran put this proposal on the Council agenda on Friday (12/2/22), less than a week after the 2023 budget was passed and the tax rate was set on Monday (11/28/22), thus avoiding any discussion of these salary increases at any of the budget hearings. Finance Commissioner Sanghvi raised no objection to this addition to the budget at this Monday morning's (12/5/22) agenda meeting when it was discussed.

Moran's proposed raises and increase in benefits apply only to the Deputies, not to any other city employees.

In the past, the Council would annually pass a "Resolution for Non-Union Full-Time Employees" setting salaries and benefits for Deputies but also for a list of City Hall positions that included, for instance, the Executive Assistants, the Human Resources Specialist, the Director of Risk and Safety, the Civil Service Coordinator, the City Attorney, etc. The city's policy has been to keep benefits and raises for these employees in line with those negotiated for CSEA (Civil Service Employees Association) employees. So, for instance, non-union full-time employees have been given an annual 2% pay increase and the same number of vacation days as the CSEA union employees.

This resolution put forward by Moran is unprecedented in that it separates the Deputies from the other non-union employees and grants these raises and benefits only to the Deputies who are now identified as "Executive Employees."

Hopefully, readers realize that the Mayor and Commissioners are only paid $14,500, so although the charter does not indicate this, they are considered part-time. The charter states, though, that each Commissioner is entitled to a deputy. While wise Commissioners in the past have chosen many outstanding deputies with the knowledge and skill set to effectively run their departments, there are no requirements in the charter for who can be appointed a deputy: no degrees, no prior experience, no civil service tests...nothing. The charter does allow the Council to "establish appropriate qualifications for any deputy," but no Council has done this so far. So these positions are, in the end, all political appointments. Commissioner Sanghvi's deputy, for instance, was her campaign manager.

Four of the five current Deputies have no prior experience working in City Hall, and four have not yet worked a year in their jobs. I am told by reliable sources that Deputy Public Safety Commissioner Jason Tetu and Deputy Accounts Commissioner Tracey O'Connor wrote the original draft of Moran's resolution.

I understand that Commissioner Moran has revised his proposal, and I would direct readers to the city's website to see the latest version. The following is a comparison between the Deputies' current benefits and those in Moran's original proposal:

In spite of the modifications in Commissioner Moran's proposal, essential problems remain.

I admit I do not know how much Deputies should be paid nor what their benefits should be.

Unfortunately, Moran's resolution was not accompanied by any documentation showing how these figures were arrived at. I would think that before such changes would be proposed, there would be some sort of salary/benefit study assessing, for instance, what other municipalities pay for comparable positions and how this compensation relates to that of other positions in city hall. As far as I can tell, these figures were grabbed out of thin air.

And these other questions remain-why have the Deputies been singled out for improved compensation, and why was this done after the budget process had concluded.

Another Blow to City Hall Morale

Multiple sources have described to me the anger and frustration that this proposal has generated among the other non-union and CSEA (union) employees.

The current rates of inflation have placed strains on most people. If the sponsors of this resolution wanted to further undermine the morale of the city's employees who are already suffering under current management, they couldn't have chosen a better weapon than this proposed resolution.