This coming week Paula and I will each celebrate another birthday (we stopped counting the years). One of our favorite desserts to have to celebrate is with a cupcake that allows us to each choose our own creative flavor. With so many special events such as baby and bridal showers, birthdays, and weddings, bakeries and small businesses have been busy making delectable desserts for these events. The cupcake is a baked good that has gained tremendous popularity over the past two decades. The big business and trend of making cupcakes has expanded through entrepreneurial bakers and bakeries taking advantage of the multiple varieties and creativity that can come with cupcakes.  However, making your own cupcakes can be an endearing gift that you can make for yourself or for someone special.

So, what is your cupcake personality? Do you prefer to indulge in rich double chocolate or simply vanilla? Maybe a wonderful red velvet or carrot cake with cream cheese frosting?  Peanut butter fudge sounds delicious or even salted caramel, mocha, or coconut. Whether your personality is fun and festive, salt and sweet, business like, lovey-dovey, colorful, adventurous, or serious, there is a cupcake flavor for you. Since their creation, cupcakes have become a pop culture trend in the culinary world. They have spawned dozens of bakeries devoted entirely to them. While chocolate and vanilla remain classic favorites, fancy flavors such as raspberry meringue and espresso fudge can be found on menus. There are cookbooks, blogs, and magazines specifically dedicated to cupcakes.

The history of cupcakes (retrieved from All About Cupcakes) is interesting to learn about. The cupcake evolved in the United States in the 19th century, and it was revolutionary because of the amount of time it saved in the kitchen. There was a shift from weighing out ingredients when baking to measuring out ingredients. According to the Food Timeline Web, food historians have yet to pinpoint exactly where the name of the cupcake originated. There are two theories: the cakes were originally cooked in cups, and the ingredients used to make the cupcakes were measured out by the cup. In the beginning, cupcakes were sometimes called “number” cakes, because they were easy to remember by the measurements of ingredients it took to create them: One cup of butter, two cups of sugar, three cups of flour, four eggs, one cup of milk, and one spoonful of soda. Clearly, cupcakes today have expanded to a wide variety of ingredients, measurements, shapes, and decorations - but this was one of the first recipes for making what we know today as cupcakes. Cupcakes were convenient because they cooked much quicker than larger cakes. When baking was done in hearth ovens, it would take a long time to bake a cake, and the final product would often be burned. Muffin tins, also called gem pans, were popular around the turn of the 20th century, so people started creating cupcakes in tins.

At Compliments to the Chef, your neighborhood kitchen and cutlery store located at 33 Railroad Place, we carry various accessories to assist you with making your favorite cupcake recipe. Cupcakes are a sweet way to please a crowd, and to say “thank you” or “I love you” to your little cupcake and to celebrate “another” birthday!! Remember my Foodie Friends: “Life Happens in the Kitchen.” 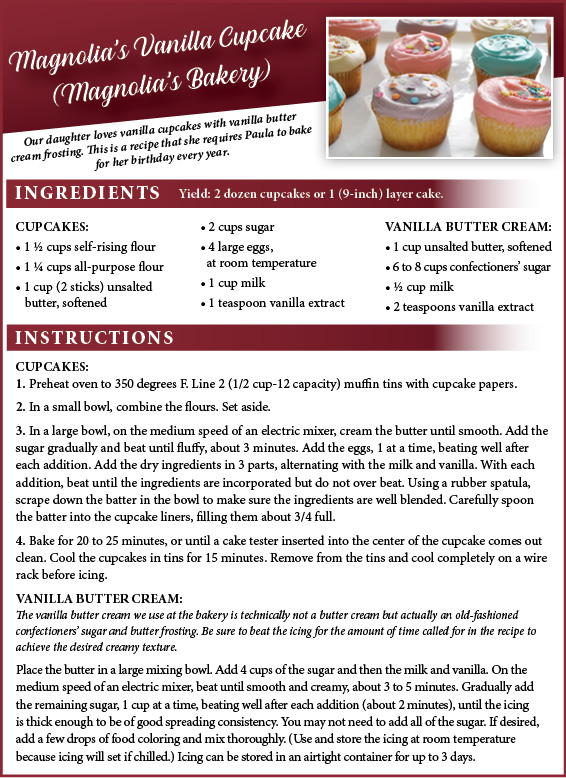 More in this category: « Spin Class for Foodies Heart of the Home »
Login to post comments
back to top