James J. Garafalo, 28, of Saratoga Springs, was sentenced to serve 4-1/2 years in a state correctional facility to be followed by 5 years of post-release supervision, after pleading to assault in the second-degree regarding his role in a Caroline Street incident last August. According to Saratoga County District Attorney Karen Heggen, “Garafalo admitted to acting in concert with his brother and co-defendant in causing serious physical injury to the victim, Mark French, who was punched in the head and fell to the ground where his head struck pavement.” French was subsequently transported to the hospital where he succumbed to his injuries, Heggen added.   Garafalo was also sentenced to an indeterminate term of 2 to 4 years for his plea to aggravated family offense, regarding a separate incident which occurred in January 2022, after intentionally violating an order of protection by having contact with a protected party via telephone while incarcerated at Saratoga County Jail. The sentences for the separate acts are to run concurrently – meaning Garafalo will serve both sentences at the same time.

Nicolle L. Bailey, 44, of Albany, pleaded May 25 to felony DWI, in connection with an incident in Halfmoon. Sentencing Aug. 3.

Allison L. Bechtold, 46, of Albany, pleaded May 25 to misdemeanor DWI, and aggravated unlicensed operation of a motor vehicle, a felony, first charged in Halfmoon. Sentencing Aug. 3.

Taylor C. Hatch, 36, of Moreau, was sentenced May 25 to 2 to 4 years incarceration, after pleading to grand larceny in the third-degree, in Hadley.

December Garney, 41, of Saratoga Springs, was charged May 23 with welfare fraud, and offering a false instrument to file.

Marvyn Robles, 25, of Amsterdam, was charged May 22 in Saratoga Springs with harassment, resisting arrest, and disorderly conduct.

Tara McCall, 35, of Saratoga Springs, was charged May 21 with criminal contempt, and criminal mischief.

Ruth Lenihan, 24, of Laconia. NH, was charged May 21 in Saratoga Springs with DWI, and a license plate violation.

Jacob Cox, 27, of O’Fallon, IL, was charged May 20 in Saratoga Springs with DWI, and making an unsafe turn.

Laura Ficarra, 39, of Rexford, was charged May 18 in Saratoga Springs with DWI, aggravated DWI, and moving from lane unsafely.

Leah Feltt, 25, of Mechanicville, was charged May 18 in Saratoga Springs with aggravated unlicensed operation of a motor vehicle. 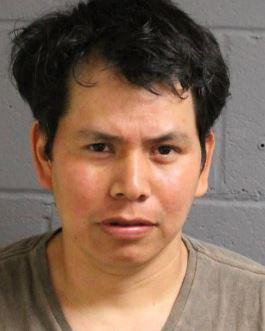 Francisco Tolentino is wanted on on a Saratoga County Superior Court warrant. Tolentino was arrested in July of 2013 by the Sheriff’s Office after he broke into a residence in the town of Saratoga and assaulted a male and a female with a glass pitcher. Tolentino is a native of Mexico and was believed to have fled the country and returned to Mexico after being bailed out of the Saratoga County jail by his employer last fall. Tolentino is a migrant worker and may have or may soon be returning to the area for work. He is an experienced farm hand and had worked at a local dairy farm in the Town of Saratoga.

Do not attempt to arrest or detain. If you have any information regarding the whereabouts of this individual, contact the Saratoga County Sheriff’s Office at 518-885-6761.