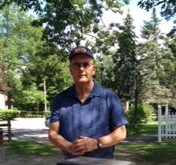 Born March 26, 1947, in New Castle PA, he graduated from Youngstown (OH) State University with a B.A. in business. He worked as a cost accountant for several companies and served in Vietnam as a member of the U.S. Army.

A job transfer from Michigan brought him to the Saratoga Springs area and he became deeply involved in the community. He was president of the Saratoga Springs Jaycees and was awarded the title of “Ambassador,“ the highest honor presented by the United States Jaycees for his “outstanding contribution to the Jaycee movement.” He also served with the Jaycees on the volunteer staff at the 1980 Olympics in Lake Placid.

He is survived by his sisters, Judith A. (Pete) Dalrymple of Paris, TX and Cynthia M. Fraley of Struthers, OH; his niece Kelly (Clint) Hill of Lindale, X; his nephew James (Jeannette) Dalrymple of Glendale, AZ; two great-nieces; his cat Ratley, and his longtime companion Sheila (aka Shelley) Riley of Saratoga Springs.

More in this category: « Ernest Joseph Armstrong, Jr. William Palmer »
back to top