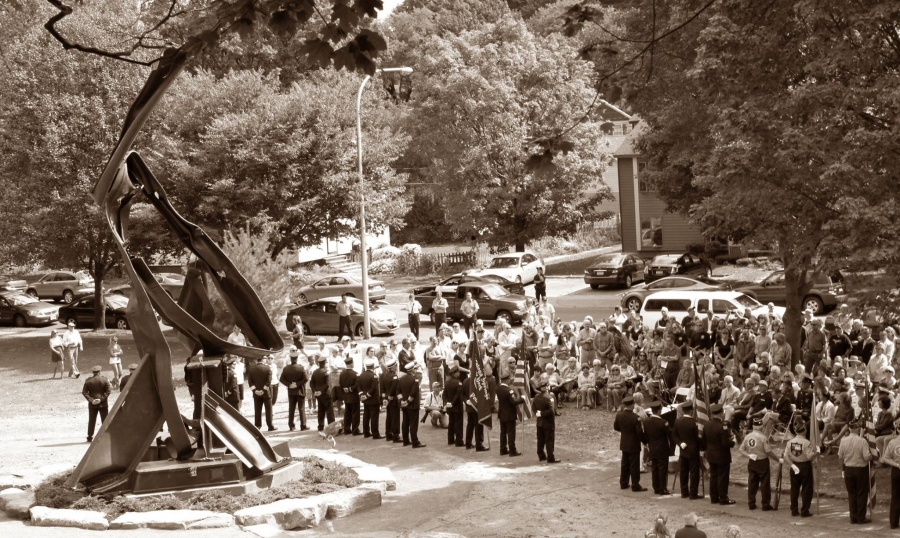 SARATOGA SPRINGS – Thin and delicate and with a flurry of leaves wrapped around its crown, a baby tree was planted this week at High Rock Park.  A symbol of hope and resiliency, its fast-growing branches are expected to sprout a profusion of white five-petal flowers and rise to a height of 30 feet.

“I think it’s an appropriate addition to this site,” said Department of Public Works Commissioner Anthony “Skip” Scirocco, standing in the morning shadow cast by the five twisted and sculpted pieces of World Trade Center steel nearby. “It’s a living memorial of a tragedy. A survivor tree. It shows the resilience of the American people.”

The tree planted in Saratoga Springs was grown from a seedling of a Callery pear tree which stands in Lower Manhattan and became known as the "Survivor Tree" after enduring the Sept. 11, 2001 terror attacks. It was the last living thing recovered from Ground Zero.

Severely damaged with snapped roots and burned and broken branches, the original tree was removed from the rubble of Ground Zero, cared for and nurtured by the New York City Department of Parks and Recreation, and re-planted near the memorial pool that occupies the footprint of the South Tower.

In 2013, a 9/11 Survivor Tree Seedling program was launched to distribute seedlings to communities that site a 9/11 memorial – such as Saratoga Springs - or communities which have endured tragedy in recent years, such as Newtown, Connecticut - in memory of the 26-people killed at Sandy Hook Elementary School, and Madrid, Spain, in memory of the 190 people killed in coordinated terror bombings against that city’s commuter train system.

The baby trees are individually numbered and overseen by the 9/11 Memorial & Museum Foundation. The one in High Rock is tagged as number 345 and represents the latest addition in what the DPW calls Saratoga Springs’ 9/11 Memorial Park, in High Rock Park.

The city’s annual remembrance ceremony, hosted by Mayor Joanne Yepsen, will be staged at the park at 8:30 a.m. on Monday.  A moment of silence will be observed at 8:46 a.m. to symbolize the time when the first plane hit the North Tower of the World Trade Center.

The Tempered by Memory sculpture, which stands 25 feet tall, was created by artists Noah Savett and John Van Alstine and is comprised of five metal pieces from the World Trade Center. Four of the pieces came from the North Tower - distinguished by the antenna on its roof - and one steel beam came from the South Tower. Saratoga Arts commissioned the sculpture. Much public debate followed regarding the placement of the sculpture. Locations in front of the Saratoga Springs City Center, and at the Visitors Center were considered. The sculpture was eventually placed at High Rock Park in 2012.

More in this category: « Cancer Warriors Unite ICE Arrests Eight Men in Saratoga Springs on Monday »
back to top