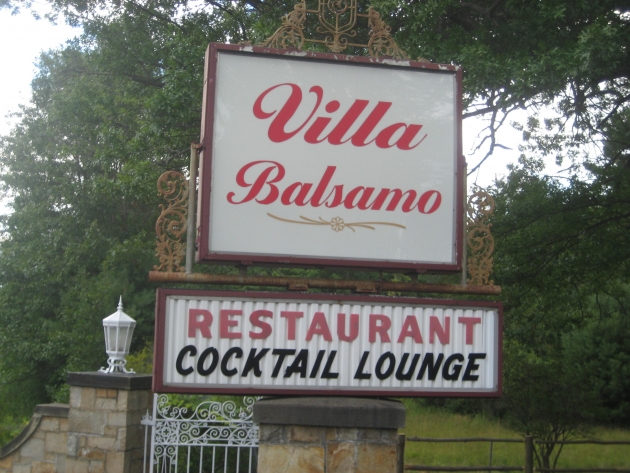 SARATOGA SPRINGS – The once more-often-than-not locked gates of the upscale Villa Balsamo restaurant are standing open for unforgettable family-style dinners from 5 to 10 p.m. seven nights a week beginning the week of August 10.

The facility has been open for private functions over the last three years, but “Ralphie” Balsamo and his father, Joseph “J.B.” Balsamo, decided it was time to begin offering a full nightly restaurant showcasing the culinary talents of a family renowned for authentic Southern Neapolitan cooking.

“This is a place with a lot of people who have grown up with my father,” said Balsamo. “That’s very important. A lot of people miss his cooking. We want everyone to enjoy it here.”

Ralphie Balsamo makes no apologies for how long it has taken to open the restaurant for daily public use. He described the facility as a Sleeping Beauty. “You have to be very careful how you wake her up,” he said. “If she wakes up too fast, she could be angry. The timing has to be just right, slow and gentle for her beauty to really shine.”

The kitchen and operations will be led by the son, but when asked if it meant the senior Balsamo will enjoy some well-earned time to relax, Ralphie Balsamo answered, with some familial pride, “Him (sic) relaxing is him watching, smelling, tasting, seeing everything in the kitchen and throughout.”

Balsamo described his father’s arrival in the late 40’s, early 50’s to the U.S. beginning with J.B.’s landing in Norfolk, Virginia with the Merchant Marines and making his way to Brooklyn with his entire entourage. “Then he built an empire,” said Balsamo.

“When he saw this place,” said Balsamo, “it took him a year of driving up here from Brooklyn once a week and waiting for the owner to come out to collect his mail.” Joseph Balsamo successfully convinced the owner to sell, and Villa Balsamo began.

The man who runs the front of the house, head waiter Scott Urell, has been with the family since 2003. “This is a great facility,” he said. “The dining room is beautiful and the grounds are perfect for tents for weddings and parties. In future, there will be a bar in the basement and the upstairs will be rooms for a bed and breakfast.”

“Yes, we’re thinking of calling it the J. B. and B.,” laughed Ralphie Balsamo. “Some of these projects will be finishing up in the fall, but we are definitely open for dinner year-round. We have free WiFi, too, so you can come with your laptop and sit with a cup of cappuccino if you like. You don’t want family-style? Someone in the family want something different? No problem. All you gotta do is let us know what you want, and we’ll get it for you.”

As pricey as that level of service may sound on such expansive grounds in the high-end feel facility, the Balsamos intend to keep things affordable. “You can have a three-course dinner for two with wine for about a hundred dollars,” said Balsamo, “and still have food to take home with you.”

Workmen were still on the premises during the media preview tour on Tuesday August 4, putting the finishing touches on the refurbished and upgraded historic mansion boasting nine master rooms. The 14.5-acre site includes four ponds, natural springs, and a spectacular view from every window. The family intends the entire first floor suite to be available for weddings.

“There are many houses for weddings in the Capital Region,” said Balsamo, “but they don’t have the original 1931 Sleeping Beauty that we have. We want to be the event place of Saratoga. The groom’s family can be on one end, the bride’s on the other, and they can walk out the door onto these grounds – and let me tell you, at dawn this place is majestic – you’ll step out feeling like all this is yours,” indicating the beautiful grounds with a broad sweep of his arm. “What could be better than that?”

He is especially proud of the menu. “All the favorites will be there,” he said. “The baked clams, the shrimp oreganata, the fettuccine prosciutto, and ocean-friendly sea bass – everything’s ocean-friendly. We will even have gluten free pasta available. Do you know, we have no walk-in freezers? Don’t need even need them. Everything’s fresh.”

Balsamo was clear that he owes much to the Villa Balsamo team. “I’m not a chef, I’m a cook,” he said, “and I’m very lucky to have a team who is with me, from the front of the house to the dishwasher beside me. My father knew the importance of that – and I tell you this with tears in my eyes and a lump in my throat – do you know what it takes for him to build something from the ground up and have it last? You need the right talent working with us, not for us, and that’s very important. I even have someone flying in from Naples. I’m not saying who just yet, but just know that we are very proud of our team and very excited about the future and being open year-round.”

More in this category: « Handicapping Pharoah’s Next Move Stories of Inspiration and Survival »
back to top