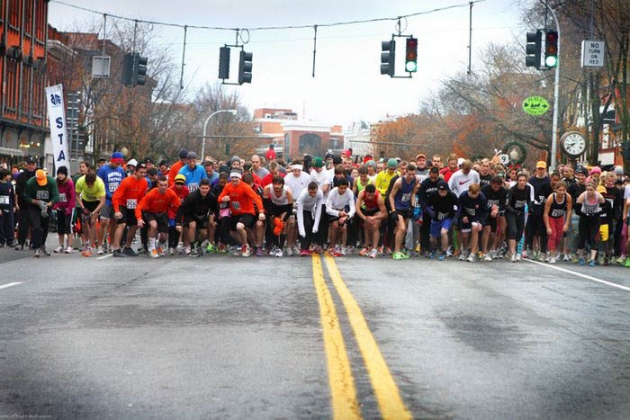 Photos by jefftaylorstudios.com courtesy of the Christopher Dailey Foundation.

SARATOGA SPRINGS — Over 3,000 participants will once again line up on Broadway near City Hall on Thanksgiving morning for the 13th annual Christopher Dailey Foundation Turkey Trot.

The 5k race is in memory of Christopher Dailey, who passed away suddenly the day after Thanksgiving in 2001, when he was an 8-year-old third grade student at Dorothy Nolan Elementary School. His parents, Mark and Maria of Wilton, began the steps to starting a foundation in his name just weeks later.

The idea was to build and pay for a recreational facility in Saratoga County for the children of the community—Chris was an avid baseball, basketball and soccer player.

In March of 2006, the Christopher Dailey gym was officially opened in Wilton at Gavin Park. By May of 2009, it was completely paid off. It’s now used for Junior NBA, after-school sports, travel teams and by many others.

As the foundation continues, the funds from the Turkey Trot and the family’s annual golf tournament have since contributed to a vast amount of other programs in the local community.

The foundation’s mission, including the Turkey Trot, is to: “Serve children in the Saratoga Community by providing resources that support youth athletics, the Christopher Dailey Foundation fulfills its mission through sponsorships for the needy, the physically challenged and all children who make sports a part of their life.”

The foundation recently pledged to set aside funds for an adaptive playground in Gavin Park.

“We’ve been fortunate to have such a great community to support [the Turkey Trot],” said Mark on Sunday, the anniversary of his son’s passing on Nov. 23, 2001. “Somehow, it’s turned itself into a family tradition for a lot of people, so we’re happy to be able to have something like this occur as a result of what happened to us. It’s nice to have it in Christopher’s memory. It gives people a chance to think about him a little bit after all these years.”

There were a few hundred participants in the inaugural Trot in 2002. The event has since grown substantially.

As of Monday, that was around the expected number with over 3,000 registered and the big day being Wednesday night’s signup.

“We’re on path for that,” Mark said on Sunday. “One year we got over 450 on Wednesday, but either way it’s still a hefty number of people and it will be a full crowd.”

A series of pictures were put together for a slide show, which played as people signed up and collected their 2014 Turkey Trot packets from 4-8 p.m. Wednesday. The slide show documented the array of the Turkey Trot fundraiser’s contributions to the community as well as pictures from previous Trots.

After starting on Broadway at 8:30 a.m., the Trot continues on North Broadway past the Saratoga Hilton before looping into the Skidmore College through the second entrance and returning back down Broadway.

“We like the formula the way we have it for the race, and we want to keep it that way,” Mark said.

Before the race starts, Christopher’s younger brother Brendan, 14, will be one of the singers for the National Anthem—a yearly tradition for the race.

Mark and Maria’s daughter, Laura Rose, 24, has a best friend who will be joining Brendan in the pre-event singing.

“We’re looking forward to seeing all the regular people we know and new people who we don’t know,” Mark said. “We appreciate it very much.”

More in this category: « 100+ Unique Gift-Buying Opportunities! Volunteers Distribute Over 4,000 lbs. of Food for Thanksgiving »
back to top