Saratoga Trading Cards to be Available on Select Days 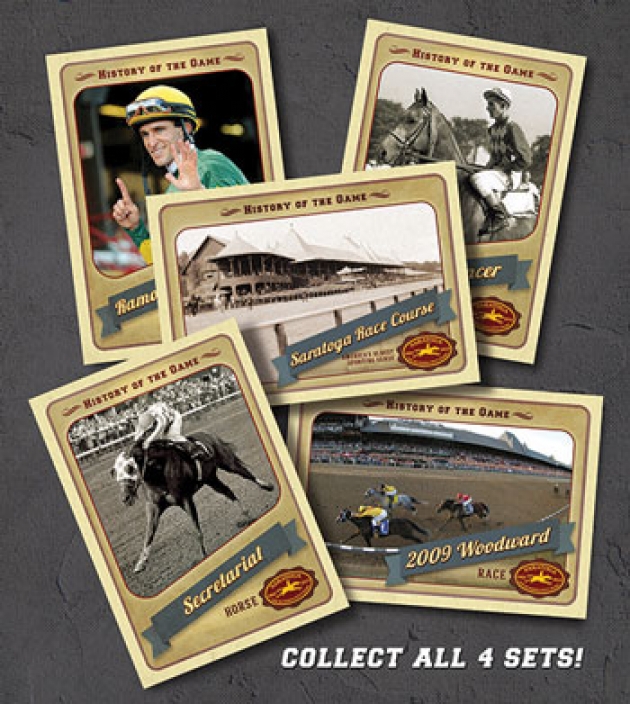 SARATOGA SPRINGS — The New York Racing Association, Inc. (NYRA) will celebrate the history of the Spa with a new collectible item for racing fans during the 2013 meet.

The “History of the Game” Saratoga Trading Cards will honor a number of the most memorable thoroughbreds, trainers, jockeys and races to have been associated with Saratoga Race Course over the past 150 years.

Some of the athletes, figures and races to be featured include Secretariat, Allen Jerkens, Angel Cordero and the 2009 Woodward with Rachel Alexandra. A limited edition card honoring owner, breeder and Saratoga Springs philanthropist Marylou Whitney will be available in select packs.

“The History of the Game Saratoga Trading Cards will offer racing fans a unique way to remember their favorite figures and moments from our illustrious history,” said NYRA Vice President and Chief Marketing Officer Rodnell Workman. “We look forward to creating a new beloved tradition for track-goers of all ages as we celebrate our 150th anniversary season.”

The commemorative Saratoga trading cards will be distributed in packs of 10 over the course of four days throughout the meet for a total of 40 collectible cards. A limited run of 10,000 complete sets will be produced for the 2013 meet.

The “History of the Game” Saratoga Trading Cards will be available for $2 each on the following Mondays: July 29, August 12, August 19 and September 2 in the Grandstand near the Saratoga Styles Gift Shop. Limit one per person; while supplies last.

All proceeds will benefit the Backstretch Employee Service Team, a non-profit organization dedicated to providing care and service to maintain the health and well-being of employees in the backstretch.

Additionally, throughout the 2013 meet, NYRA will celebrate some of the Spa’s greatest thoroughbreds through its Spa Stars series. A new horse will be highlighted each racing day of the season through NYRA’s official twitter feed, @NYRANews, and at thenyra.tumblr.com. Fans that re-blog or re-tweet the post or use #SpaStars will be entered to win various Saratoga Race Course merchandise.

The 2013 meet at Saratoga Race Course commemorates the 150th anniversary of the first organized thoroughbred race meeting in Saratoga, which took place over the course of four days in August 1863.