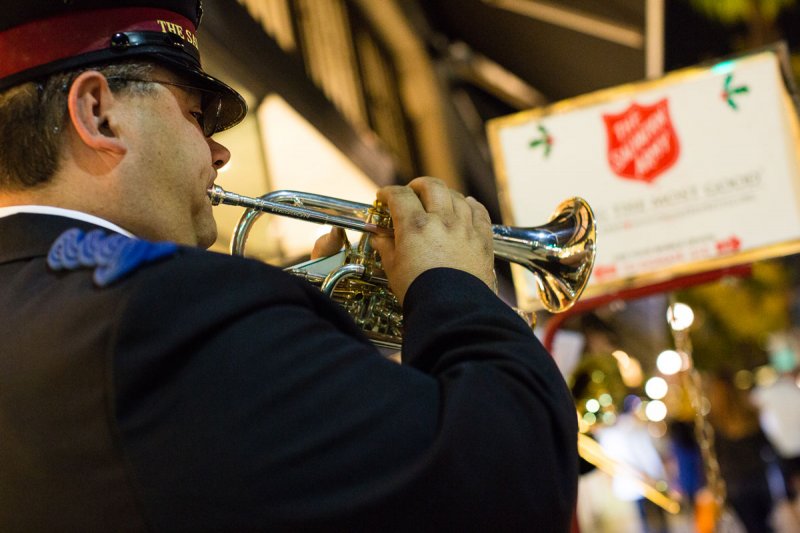 SARATOGA SPRINGS — Most know them for their red kettles and presence during the holiday season - but the Salvation Army, which sites its county headquarters on Woodlawn Avenue in Saratoga Springs, supports local families with a variety of programs throughout the year.

On premises there is a food pantry, and a place where after-school youth programs offer kindergartners to high school seniors help in reading, social and life skills, and the playing of musical instruments. The organization also works with thrift stores in Clifton Park, Queensbury, and Glens Falls, as well as with local agencies such as Shelters of Saratoga, and RISE.

“A lot of the people are those who just walk through the door and say: I need help,” says Lt. Michael Dow, Lt., the Corps Officer at The Salvation Army in Saratoga Springs.

“That could be physical health, mental health, food insecurities. They could need help with heating their apartment or house, with gas in their car, or getting to medical appointments. Really, it encompasses a lot, and people can walk in the door or call,” said Dow, who along with wife and fellow Salvation Army Lt. Cassidy Dow have been involved through their families with the Salvation Army since their respective childhoods.

“It runs deep in our blood,” says Dow, whose office windows face the Woodlawn Avenue parking garage, where those who are homeless often congregate. Here too, assistance is offered.

“We see things and it just hurts our hearts, but we are able to provide a meal, to provide a shower, to offer a place to come in, to help them feel safe and comfortable before they go back out on the street,” he says.

Donations to The Salvation Army Red Kettles during the holidays, meanwhile, help support many of the organization’s missions.

“Eighty-five cents of every dollar that goes in to the kettle goes right back out to the community,” Dow says.

The origin of the red kettle traces back to a December day in 1891 when Salvation Army Captain Joseph McFee sought a way to collect funds to provide a free Christmas dinner to San Francisco’s poor. McFee’s idea took off. Within four years, the kettle was used in 30 Salvation Army locations across the west coast and continued to spread globally. Red Kettles can now be found across the U.S. and Europe, Korea, Japan, Chile, and Australia.

On Friday, Dec. 9, an anonymous donor has offered to match every kettle donation locally. The red kettles are stationed at Walmart stores in Wilton and Clifton Park, Price Chopper stores on Route 50 and in Clifton Park, and along Broadway in Saratoga Springs.

The red kettles will be out through Christmas Eve. People interested in volunteering for a few hours of ringing downtown, or businesses interested in allowing a kettle to be set up can call Dow to offer their help.

“Christmastime is a huge fundraiser for the Salvation Army and everything we are able to do day-to-day Is based upon how funds are raised during this season. We are fortunate to have a community that’s so giving - although just to be honest we are a little behind in our goal this Christmas season, so any and every dollar helps,” Dow said.

The fundraising goal is $134,000 and donations may be made in person at the red kettles (where a QR Code is also available) or online through the organization’s website.

On a grand scale, the Salvation Army supports recovery efforts in national and international disasters: helping families prepare for the bitter cold in Ukraine by providing basic hygiene, warm meals, and blankets; readying dozens of mobile feeding units to mobilize across Florida during recent Hurricane Ian relief efforts, and supporting families in the aftermath of devastating floods in Pakistan.

In its fight against hunger and food insecurity, more than 56 million meals are provided annually through food pantries, meal programs, and no-cost sustainable community gardens.

It engages in anti-human trafficking efforts by providing ongoing support and services to victimized survivors, and serves displaced men, women and children with local Salvation Army homeless shelters and both transitional and permanent supportive housing programs.

The tax-exempt organization operates more than 7,000 centers in communities across the U.S., and in 2021 served more than 25 million people.

The Salvation Army’s Pathway of Hope initiative provides enhanced services to families with children desiring to take action to break the cycle of crisis and intergenerational poverty. By 2030, through the Pathway of Hope, The Salvation Army says it will make a lasting difference in reducing intergenerational poverty by transforming the lives of 100,000 families in the United States.

=The Salvation Army of Saratoga Springs is located at 27 Woodlawn Ave., just east of Broadway and opposite the parking garage. Call 518-584-1640, or go to: https://easternusa.salvationarmy.org/empire/saratoga-springs/

More in this category: « Healthy Living Gives $91K Back to Communities City Votes Down 2 AM Bar Closing Time; Tables Salary Increase for Deputy Commissioners »
back to top