Saratoga Springs’ Community Outreach Court is the Only One of Its Kind in Upstate N.Y. 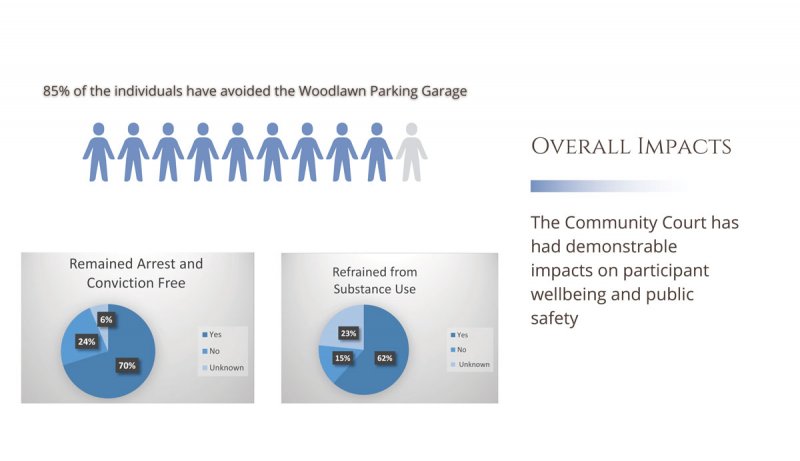 SARATOGA SPRINGS — In 2020, the city found itself faced with a problem.

A collaborative effort between the Saratoga Springs Mayor’s Office, City Court Judge Francine Vero and RISE Housing and Support Services assisted in the design of a Community Outreach Court. Two years later, the program is showing signs of success.

“Before the court, people who were homeless and getting citations were just not showing up. The dockets were backlogged, and no one was getting the help they needed,” RISE Executive Director Sybil Newell explained last week, during the organization’s annual update to the City Council.  “Since October 2020, the RISE Outreach Court Team has been present at every session, and 60 individuals have participated; 77% have appeared at all court dates versus 0% prior to this program being active.”

The post-discharge results point to 14 people who have graduated and remained arrest free for six months; 9 who ended up in jail and served their sentences; 6 hospitalized psychiatrically and 3 who entered into rehab programs, Newell said.  “I consider the hospitalizations and entering into rehab programs to be successful, because that’s where they needed to be at that time.”

Additionally, 70% of the people involved in the program complied with all their court orders, and 78% have maintained contact with RISE Housing & Support Service. The housing agency sites its main offices on Union Avenue and is tasked with providing safe, healthy housing and support services to people with mental health concerns, substance use, and other life challenges.

The Community Outreach Court in Saratoga Springs, initiated in October 2020, stands as the only outreach court in upstate New York.

Francine Vero serves as judge for the Saratoga Springs City Court, as well as judge of the Outreach Court. Vero provided a statement to the city in conjunction with the annual report.

“When I took office, I was dismayed by the number of individuals suffering from homelessness charged with offenses who failed to appear in City Court when directed and re-offended shortly after being convicted. It was evident this ‘revolving door approach’ to court proceedings was ineffective,” Vero wrote.

With the formation of the Community Outreach Court in late 2020 anyone charged with a non-violent offense and lacking a stable residence was connected with a RISE coordinator after arraignment. That person was subsequently connected with social services they were in need of. Transportation was also provided to court appearances, treatment appointments and psychological evaluations.

“They work with individuals while they are incarcerated, setting them up for success with the treatment and housing plans for when they are released from jail,” the judge wrote. “The Community Outreach Court has proven to benefit the community and improve the lives of the participants.”

Officials call it a dignified and research-based approach to working with people experiencing homelessness, improving the quality of life within the community, as well as resulting in administrative cost benefits by decongesting court dockets and reducing the amount of time the police department spends responding to calls and arrests.

“As we all know, the Woodland parking garage is still quite a situation - but of the individuals going through the Community Outreach Court: it is effective, and they are staying away from that parking garage,” Newell told the council. “In terms of overall impact, of the people who have gone through this court program, 90% of them have avoided the Woodlawn parking garage, 72% have remained arrest and conviction free, and 66% have refrained from substance abuse. This is information that we get from the police and the courts,“ she said.