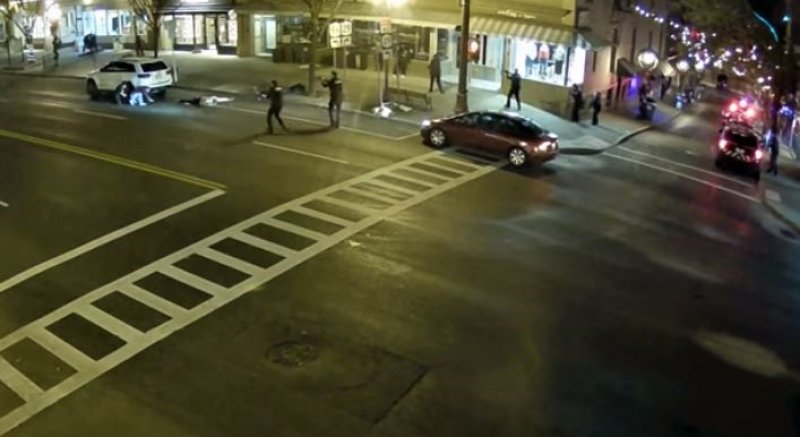 Video capture from city camera at 3:03 a.m. on Sunday, Nov. 20, 2022 depicting officers on the west side of Broadway near Caroline Street tending to scene of weekend shooting. Snapshot of a 2-minute video officially released by the city on Nov. 20. A 26-second video from an officer’s body cam was also released.

SARATOGA SPRINGS — An early Sunday morning altercation turned into an exchange of gunfire that spilled onto Broadway and ultimately resulted in approximately 20 shots being fired.

The 3 a.m. incident believed to have begun as a verbal dispute at a bar on Caroline Street between an off-duty Sheriff’s Deputy from Vermont and “a group of individuals from the Utica area,” Public Safety Commissioner Jim Montagnino said, accelerated as the altercation moved west to Broadway with approximately 8 shots being fired. City police officers responding to the incident fired approximately 11 shots after the off-duty deputy allegedly ignored calls to drop his weapon. The incident marks the first discharge of a weapon in the line of duty by a Saratoga Springs officer in more than a quarter-century.

During the initial dispute, the Vermont deputy was physically attacked by at least three people, Montagnino said, during a press conference staged at City Hall Sunday, less than 12 hours after the incident had occurred.

Officers responded to the scene.

“What they see is the Vermont sheriff’s deputy, standing on the sidewalk, his gun leveled and moving from side-to-side pointing the gun,” the commissioner said.  “The officers repeatedly, loudly direct the deputy, “Drop the gun, get on the ground,’ again, again and again. By my count there are at least eight separate clear unequivocal demands to put the gun down and get on the ground. They are all ignored.”

Three city officers fired a total of approximately 11 shots.  The Vermont man suffered a number of wounds. A woman believed to be the Vermont man’s girlfriend was “nicked by one of the bullets in her upper arm.”  The man is reportedly in stable condition at Albany Med.

The Vermont man, Vito Caselnova IV, is a Rutland County deputy who has been on the force since April 2019, first reported by WNYT NewsChannel 13.  A native of Glens Falls, he graduated from Glens Falls High School in 2016 and school at The College of Saint Rose.

“None of our officers were harmed.  That’s something we can all certainly be happy about,” said Mayor Ron Kim.

State police are conducting an investigation into the incident and Broadway was closed from Lake Avenue to Division Street for the majority of the day on Sunday.

“This is the first time in 26 years a (city) officer has discharged a firearm in the line of duty,” Montagnino said. There have been no immediate arrests made in connection with the incident.

More in this category: « Catholic Charities Hosts 27th Annual Saratoga Festival of Trees 200,000 Books: Lyrical Ballad Has A Lot of Stories To Tell »
back to top