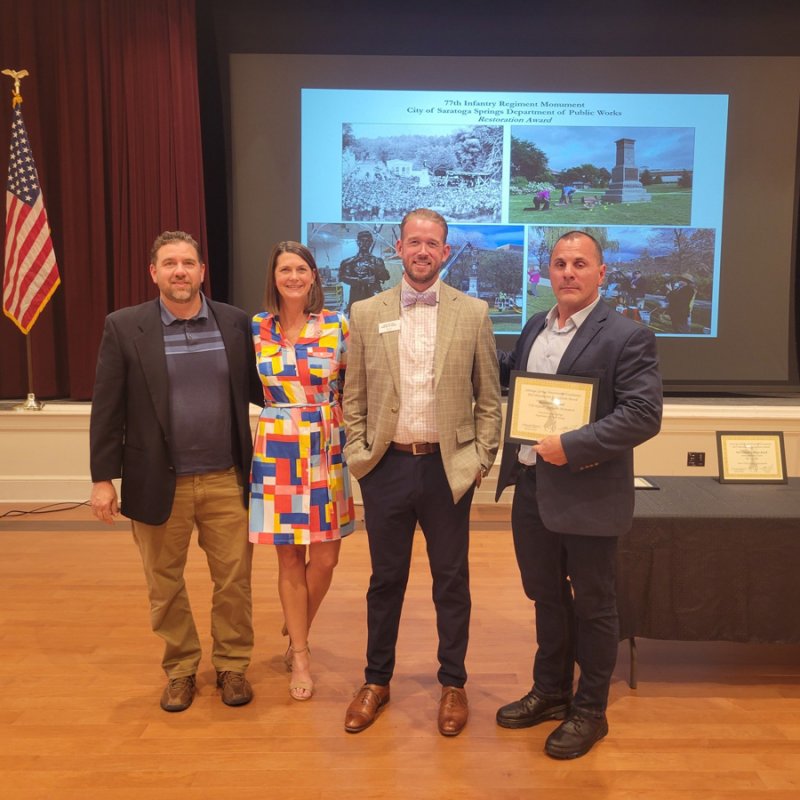 SARATOGA SPRINGS — Each year in September the Saratoga Springs Preservation Foundation recognizes those who have preserved the architectural heritage of Saratoga Springs. Last week, award recipients were honored during the Foundation’s Annual Meeting in the Music Hall at City Hall.

The City of Saratoga Springs Department of Public Works received the Restoration Award for the 77th Infantry Monument, which was vandalized in Congress Park in July 2020. The cast iron and zinc statue was erected in 1875 and donated to the City, in honor of the 77th Infantry, known as the Saratoga Regiment, who fought in the Civil War.

“After seeing it shattered in pieces on the ground, it seemed impossible for the statue to be put back together, but it was,” said Bosshart. “Commissioner Anthony “Skip” Scirocco was very proud of this restoration.”

• The Children’s Museum at Saratoga with an Adaptive Reuse Award for their ambitious project at the Lincoln Baths, 65 South Broadway.

• The New York Racing Association received two awards for projects at the Saratoga Race Course: a Rehabilitation Award for Cottage #7 which is visible from Nelson Avenue, and a New Contextual Design Award for the Post Bar.

• A Landscape Initiative Award was given to 754 North Broadway for the installation of a new sidewalk along East Avenue that matched the original historic brick herringbone sidewalk.

• Jennifer and Kyle Perry received a Porch Restoration Award for their home at 173 Phila Street. The homeowners utilized historic images and Sanborn Maps to determine what the original porch may have looked like and undertook an extensive restoration.

• Jessica Niles of 581 North Broadway was given a Window Initiative Award.

• Saratoga City Tavern, 19-21 Caroline Street, was given a Window Initiative Award for the restoration of the bay windows facing out onto Caroline Street.

• The property at 59 George Street received a Rehabilitation Initiative Award for the exterior work completed, including the restoration of the side porch. The award ceremony concluded with the Rehabilitation Award for Stone Abbey, 125 Circular Street.

More in this category: « Native Plantings Presentation by Ballston Spa CCE Oct. 13 Law and Order DA Debate 2022 »
back to top