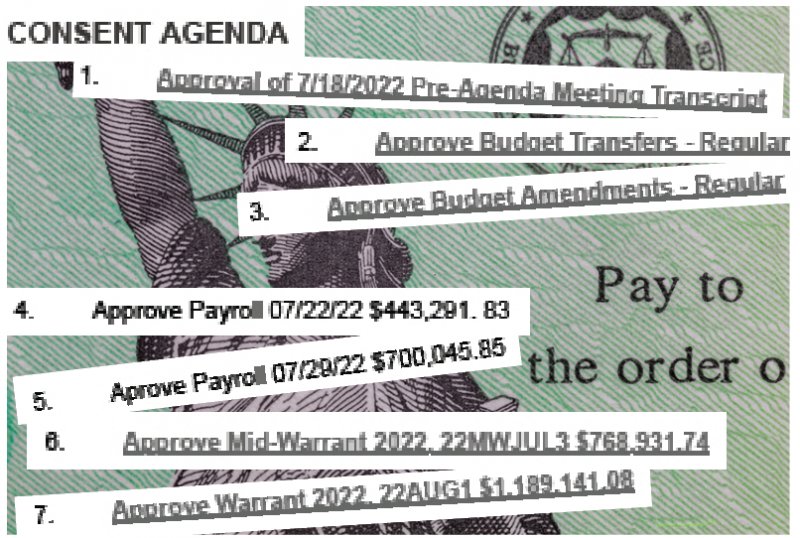 SARATOGA SPRINGS — A long-standing city practice that normally passes smoothly and without incident screeched to a halt this week during a 30-minute, at-times heated discussion among members of the City Council.

At issue: a $25,000 cost allegedly “hidden” among several other items of a “Consent Agenda” for the council to simply pay and approve without knowledge or discussion.

That one item aside, council members expressed even greater concern when questioning whether the practice had similarly occurred in other instances, and over a longer period of time.

“It seems like somebody purposely tried to hide it... this decision to spend $25,000 of taxpayer money without our knowledge,” city Mayor Ron Kim said.

The “Consent Agenda” is typically part of the City Council meeting agenda tended to near the start of the twice-a-month meetings.

Robert’s Rules of Order refer to the “Consent Calendar” as one which allows for the grouping of items together. It is usually comprised of miscellaneous payments and non-controversial routine matters which may be approved in its entirety as a time-saving feature by a board.

A deep-dive into two decades-worth of City Council meetings seems to indicate those routine matters used to appear on council members’ individual agendas as separate entries. At some point during the summer of 2006, and specifically beginning with the Aug. 1, 2006 council meeting, a grouped “Consent Agenda” appears on its own at the meeting start and includes notice of accepted donations, the approval of previous meeting minutes, budget amendments and budget transfers.

Public Safety Commissioner Jim Montagnino said he learned of the $25,000 payment cost - which is related to an insurance deductible settlement of a long-pending lawsuit against the city - after aggressively seeking answers to many questions the evening before this week’s council meeting.

“I made a number of phone calls and inquiries and I didn’t find out until seven o’clock last night (Aug. 1) that this $25,000 deductible was a part of the settlement of the case – and it appeared tucked in on page 52 of an 80-page consent agenda,” he said.

“It seems to me, if this kind of thing is occurring, it’s now incumbent of me as a member of the City Council to have to comb through the thousand-or-more items on individual lines of the consent agenda just to make sure that somebody’s not pulling a fast one and slipping something by us,” Montagnino said.

“If I hadn’t asked those questions yesterday, this consent agenda would have been passed without discussion and I would have found out later that I’m now roped into a problem (and having to explain) how I as a City Council member could have allowed that to slip by without discussion, without transparency and by not even knowing,” Montagnino said. “This is totally reprehensible; this is unacceptable.”

“The way this issue came up… this was not even known to us, and was (simply) placed on the consent agenda,” Mayor Kim said.

There are a variety of people who work for the city - not just council members - who have the authority to place bill-paying items on the consent agenda.

During the meeting, the council moved to remove the item from the Consent Agenda. It also authorized the mayor to send letters to the insurance carrier, the court and to counselors ausking for a detailed explanation of how the deductable arose and why the City Council wasn’t informed it is to pay $25,000.