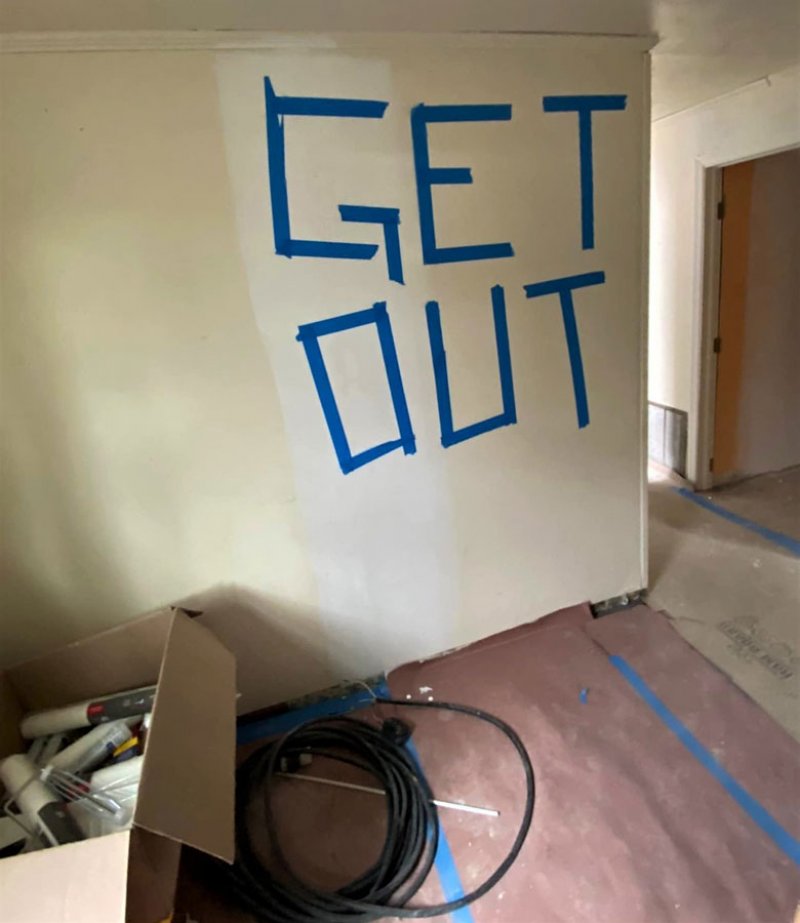 Blue painter’s tape fixed to one of the walls inside a home under renovation in Geyser Crest. The message continues along a second wall to include a racial slur.

SARATOGA SPRINGS - The first indication something was amiss came in the form of an anonymous complaint someone made with the city, says Heather Chevally. A few days later the hard evidence showed up literally fixed to the interior walls of the house.

“I have no idea if the two things are correlated, but the timing is suspicious," she says. “To me, it feels like someone is watching."

Chevalley works in software sales. She grew up on Long Island, where her family was employed in the home-building industry. Chevalley’s wife Adrienne grew up in the Geyser Crest neighborhood of Saratoga Springs - where her mother still resides. They recently embarked on a side project buying and rehabbing houses.

“It’s something I’ve always wanted to do. Our goal is to make a living doing this eventually, and to be responsible people in real estate‚" Chevalley says. “Eventually, we’d love this to be our full-time job."

There is another home in Saratoga they are rehabbing and are also involved in a project in the Rochester area ﬁ “similar, but (in that instance) we’re going into lower income areas, to get the bad landlords out and give people a better quality of life and a home they could be proud to live in."

Given Adrienne’s background and familiarity with Geyser Crest, they purchased a home in the neighborhood and are undertaking a $100,000 rehab with the purpose of re-investing in the community.

The home is settled in a residential community, a short song’s serenade south of SPAC, in a neighborhood comprised of single-family homes, accented by driveways and an occasional attached garage. An American flag flies here. A portable basketball hoop stands there. A cross-section of roads swoop into one another, bending around soft turns.

“We feel like there’s a right way and a wrong way to be successful. We’re big believers in good karma and I think when you give back to the community and do things in the right way, the community and people give back to you as well,‚ she says. “I feel the same way about our realtor and our contractor. I really like these guys, trustworthy, just making sure everything they’re putting their name on is being done right.“

Five weeks into the project came an unexpected visit from the city. “Last week, the building department showed up because of a complaint ﬁ which we thought was weird. We had talked to all our neighbors, and everybody seemed really friendly. The guys working are very friendly and the job site is kept very clean. Nothing in the house needed to be permitted, but they got a complaint and made us stop working, until I went down to the city‚" says Chevalley, adding that the complaint was made by an anonymous person, or, at least by someone not known to her. An engineer visited the home and confirmed that given the work being, done a permit was not needed. After a two-day pause, the project resumed. It was Friday.

On Saturday morning, when the contractor entered the house, he noticed someone had broken in after the crew had left the previous day. The windows were all open, the heat turned off. A roll of blue painter’s tape was peeled off and used to create a large message that spread across two interior walls. One read: “GET OUT." The second one: N-word, plural. All in caps.

“The crew are all people of color. It was very clearly directed at them. We were devastated. To walk in and have to look at that? They’re such good guys. I was sick to my stomach," Chevalley says.

“Someone specifically broke in the house to send a message. There was thousands of dollars of tools and equipment there. They didn’t steal anything. They wrote on the walls in painter’s tape. They shut our heat off and left the windows open - it was a cold night and the pipes froze and busted. Honestly, it was creepy. They broke in and entered just to send a message.

Police were called and initiated an investigation. They unfurled painter’s tape from the wall hoping to secure fingerprints, dusted the windows, and found a hand-print on the wall, Chevalley says. “The police seem pretty committed. Obviously this is appalling, so hopefully they can figure out who did it."

One of the steps involves learning whether the person who initially called the building department with the complaint is connected in some way to the person or persons who broke in. The break-in occurred the first day after the crew returned to work.

“It’s being taken very seriously because of the nature of the incident‚" said Public Safety Commissioner Jim Montagnino. He confirmed there was a search at the scene for fingerprints and that an investigation is underway. Potential charges could include offenses related to the break-in, as well as to the intentional targeting of persons regarding their race or color, by definition a hate crime.

“I’m sure there are more hateful people out there than I want to believe, but I just can’t imagine this is how people think," Chevalley says. “I do generally feel this is an isolated incident. That not the way of the community. The community has really seemed to rally around the guys. They have been stopping by and bringing the guys lunch; people said they want to hire them for more work in the neighborhood," she says.  “You really have to have nothing going on in your life to break into someone’s house because you hate someone so much over the color of their skin. I can’t even start to try to understand that."