Gov. Cuomo: We Cannot Wait Until Summer To Turn The Lights Back On The Arts 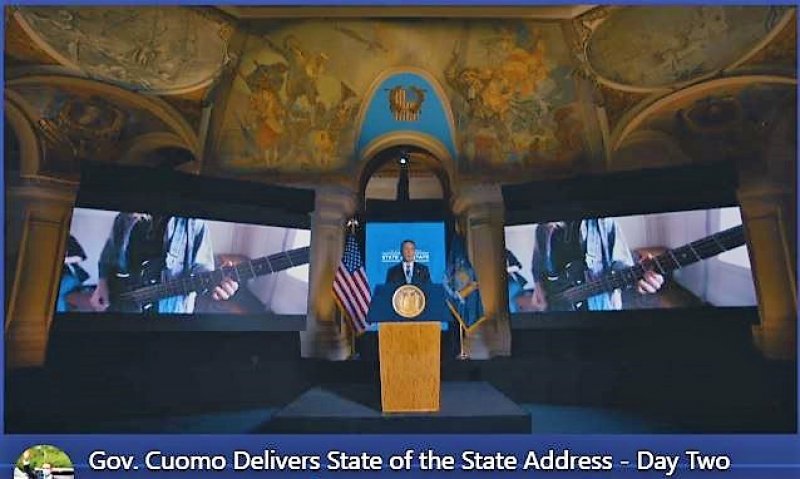 Gov. Andrew State of The State address on Tuesday, framed by twin images of a bass guitar.

ALBANY — Gov. Andrew Cuomo Tuesday announced the launch of New York Arts Revival – a public-private partnership tasked with a return of the arts and culture to the public space.

“We must accelerate the return of the arts. Cities are, by definition, centers of energy, entertainment, theater and cuisine.… what is a city without social, cultural and creative synergy,” he said, in front of a pair of screens depicting images of dancers, musicians, and the bright theater lights of Broadway.

Cuomo quoted from JFK, remarks the president made at Amherst College in Massachusetts in late October 1963: “I see little of more importance to our country and our civilization than full recognition of the place of the artist.”

“Almost no one has been hurt more by COVID than our artists,” Cuomo added, citing an NEA study that reported 52% of actors 55% of dancers, and 27% of musicians were put out of work due to the pandemic. “In New York, the arts and culture industry accounts for almost half a million jobs and generate $120 billion in economic output…we must act, we cannot wait until summer to turn the lights back on the arts and provide a living wage for artists.“

A series of pop-up performances across the state are being organized, the launch of which will be a Feb. 4 event to feature “more than 150 world-class artists,” Cuomo said.

Rapid testing, he said, is key to open restaurants, theaters, office buildings and other venues, and there are plans being prepared to open hundreds of rapid testing “pop-up” sites across the state.

That testing strategy was put to use at last weekend’s Buffalo Bills game, where 7,000 fans who were allowed to attend the event were COVID tested before the game. The tests were conducted via a vehicle drive-thru, and took approximately five minutes per car.

“The Department of Health is monitoring Contact Tracing results, but all early indications suggest this model was successful and it poses great possibilities to re-open events to the public.”

More in this category: « Overcoming Homelessness in Saratoga: There is Hope Oklahoma Track Gets A Makeover »
back to top