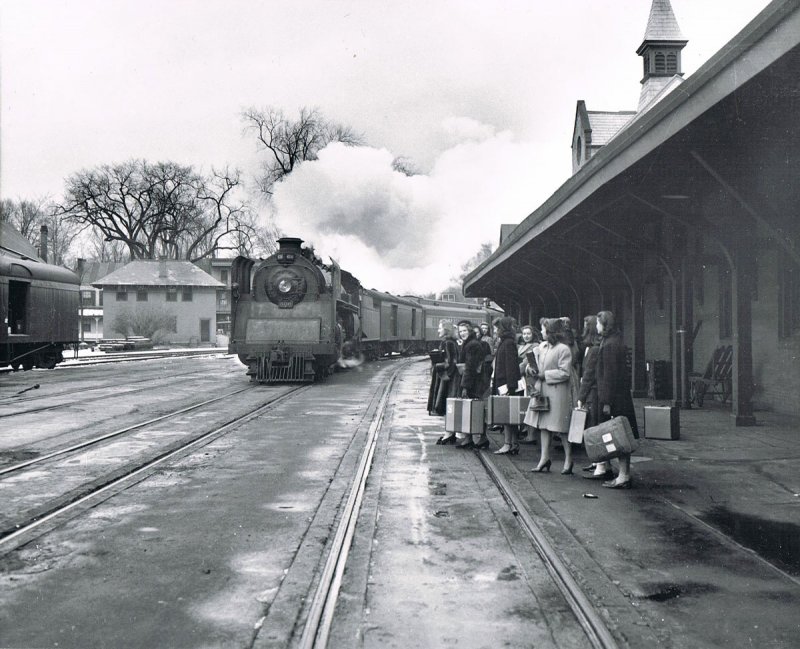 1944. College students from Skidmore getting ready to board a train from the Saratoga train station to return home. That train station was located on Railroad Place on the westside of Broadway. Photo courtesy of the Saratoga Springs History Museum.

In a 1976 lecture, Joseph Palamountain said, “Make no small plans for your institution ...” One of the fabled presidents of Skidmore College, he served the institution in remarkable ways, not the least as engineer of the implementation of the college’s move from a collection of former private houses to a planned state-of-the art campus that reinvigorated the nearly moribund north end of Saratoga Springs.

The vision of Skidmore’s leaders transformed the college and helped significantly with the revitalization of Saratoga Springs. Ask any car or appliance dealer in town about their busiest sales time; it always coincided with “Happy Pappy” weekend when dads came to visit their daughters studying at Skidmore.

In 1903 Lucy Scribner founded the Young Women’s Industrial Club. The young institution was transformed into the Skidmore School of Arts in 1911 and chartered as Skidmore College in 1922. With strong support from the city’s civic and financial leaders, it gradually acquired dozens of buildings around the intersection of Union Avenue and Circular Street. When President Henry T. Moore retired in 1957, the all-female college had 1,085 enrolled, and a new dorm was being built on Union Avenue to house another 138. Even so, the young college needed more growth to put its finances on solid ground. Its survival, and certainly its academic success, depended on expansion. But Skidmore’s urban setting made such expansiondifficult.

A 1960 master plan for the college called for outward growth toward Phila Street and Park Place, and upward growth with new, taller buildings along Union Avenue. This plan would have required demolition of many historic structures and closure of streets.

At the same time, two directors of the Glens Fall Insurance Company conceived the idea of moving Skidmore to the outskirts of Glens Falls, on land owned by the insurance company and now occupied by Adirondack Community College. Newman E. Wait, Sr., President of The Adirondack Trust Company, discovered the plot and suggested to Eric Jonsson, the founder of Texas Industries and a member of Skidmore College’s Board of Trustees, that 600 acres of the abandoned Woodlawn Avenue estate on North Broadway would make a very suitable new home for the college. Eric asked Newman to find out the price. He did, it was $100,000 for 600 acres, and at the next board meeting of Skidmore, Eric Jonsson offered to buy the land and donate it to the college. Over the objections of two representatives of the Glens Fall Insurance Company the Board of Trustees accepted Eric Jonsson’s generous offer.

Within a year, Skidmore’s trustees had approved a $26 million plan to build a new campus to accommodate 2,000 students. This was risky, and the move was expected to take 10 years (it actually took 17). But expansion would generate more income; new buildings would be far less costly to maintain; and better facilities would help attract a strong faculty and more students.

In April 1964, the trustees selected Joseph C. Palamountain to be the college’s fourth president. His first task was to raise the extraordinary finances required for a move, and he did so.

His next task was the move to the new campus. Dormitories, the library and dining hall were ready by January 1966 when Skidmore began operating on two sites – Union Avenue and North Broadway – running buses between them.

Coeducation began to seem like part of the solution to building the student body, but the trustees moved cautiously, concerned about the reaction of alumnae in the midst of a large building program.

Coeducation came and would ultimately strengthen the college, but change was slow. Men were hard to recruit. By the mid-1970s, men amounted to only 15 percent of the student body. Later in the decade, a strong thrust was made to increase the number of men, and by 1985 they numbered 40 percent of the total.

Palamountain oversaw the first of more than 40 buildings built during his 22-year term.

By the time Palamountain retired in 1987, the original building program was complete, additional constructionhad followed expansion, and the college was operating comfortably in the black.

A retirement campaign in honor of the college builder nearly doubled the Skidmore’s $25 million endowment.

David Porter succeeded Palamountain, with goals of enhancing and expanding intellectual life, making the college more diverse, and raising the funds. Although the student body had reached 40 percent male, only 7 to 8 percent of its students were members of minority groups when Porter arrived; at the time of his retirement that percentage had doubled.

A graduate degree, the Master of Arts in Liberal Studies, was added in 1992. Later in the decade, the college expanded the library and built the cutting-edge Tang Teaching Museum and Art Gallery, and the college’s endowment had reached $120 million by the time Porter retired.

Porter was succeeded in 1999 by Jamienne Studley, an attorney with the U.S. Department of Education and, in 2003, by Philip Glotzbach from the University of California Redlands. Under Glotzbach’s leadership the college added a new music performance center including Zankel Hall, and his wife, Marie, initiated the citywide Arts Fest.

Accepting only 29 percent of those who apply, the college has become far more selective than in the past, yet it offers more financial aid and it has recruited a more diverse student body, including many international students.

With a national reputation, Skidmore College is in every way a central institution in Saratoga life. Its annual impact on Saratoga County is $342 million, a significant part of the county’s economy.

Read 374 times
More in this category: « Ellis Corners – 200 Years Past Rebirth of Elegance: Union Avenue »
back to top