Blue Streaks to Serve Their Country 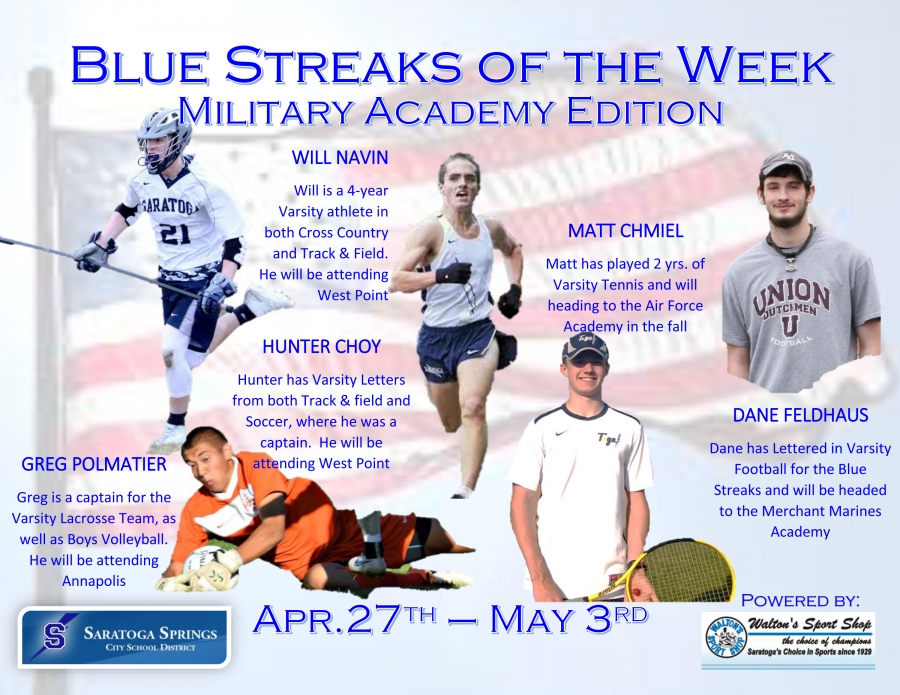 SARATOGA SPRINGS – A handful of senior athletes from Saratoga Springs will be embarking on an exciting new journey next fall.

Chmiel is a three-year veteran of the Varsity Tennis team at SSHS. Last year, he and the rest of the team made it all the way to claim sectional titles. He currently plays doubles. He first started considering pursuing a military career after high school only a few years ago while witnessing a friend go through the application process. Not having any military history in his family, it was not something he ever thought about in his youth. He attributes his decision to apply to the Air Force Academy to his interest in studying aeronautical engineering, as well as to a general interest in military aircraft.

“I’m very excited,” Chmiel said. “I’m humbled to have the opportunity. It was such a competitive process. I know that there’s gonna be a lot of work ahead of me, but I’m ready to put in whatever it takes.

As a member of the Varsity Soccer team, Choy made it to the position of Captain after serving as the starting goalkeeper. He has also competed in Track & Field events. Attending the Military Academy at West Point has been an almost life-long dream for Choy, ever since he read a biography of General George S. Patton in second grade that inspired him to serve his country.

“I’m super excited. It’s been a long time coming,” Choy said. “It’s been a very long process and I’m extremely humbled to be able to pursue this career in the army.”

Feldhaus’s athletic history at SSHS began on the freshman baseball and football teams in ninth grade, and since then he as played on both the JV and Varsity football teams. For a long time, he knew that he wanted to get involved with either the Navy or the Marine Corps, but was never sure in what way. Having been urged to study engineering by his mother, he found the Merchant Marine Academy at a college fair, and found that it satisfied both goals, to serve his country and to study engineering.

“It’s been a long process, maybe like a 13-month application. It just never really seems to end,” Feldhaus said. “So, I’m really excited to get there and get it going.”

Navin has been involved with the track team since his freshman year at SSHS. Over the course of his varsity career, he has been the Captain of the Track & Field team, competed in the Suburban Council All-Stars team two years in a row, and set a school record in the 4x800 meter relay. West Point has been his goal since elementary school, having always wanted to serve his country from a young age.

Polmatier has been involved in athletics since seventh grade. His varsity career began in his sophomore year when he joined the Varsity Lacrosse team. He has since served as the Captain of that team in both his junior and senior years. He also played on the Varsity Volleyball team in his junior and senior years, serving as Captain for the team as a senior. He believes that his love of sports and his desire to attend the Naval Academy in Annapolis are tied up in the same principles.

“When I’m having the most fun ever is when I’m competing with a group and working hard,” Polmatier said. “And that’s kinda the core of what the military is, just teamwork and relying on that person next to you, which is why I have a fondness for sports, and what’s led me to my interest in the military academies.”

Each of the student athletes said that they intend to continue on with athletics while attending their respective schools.