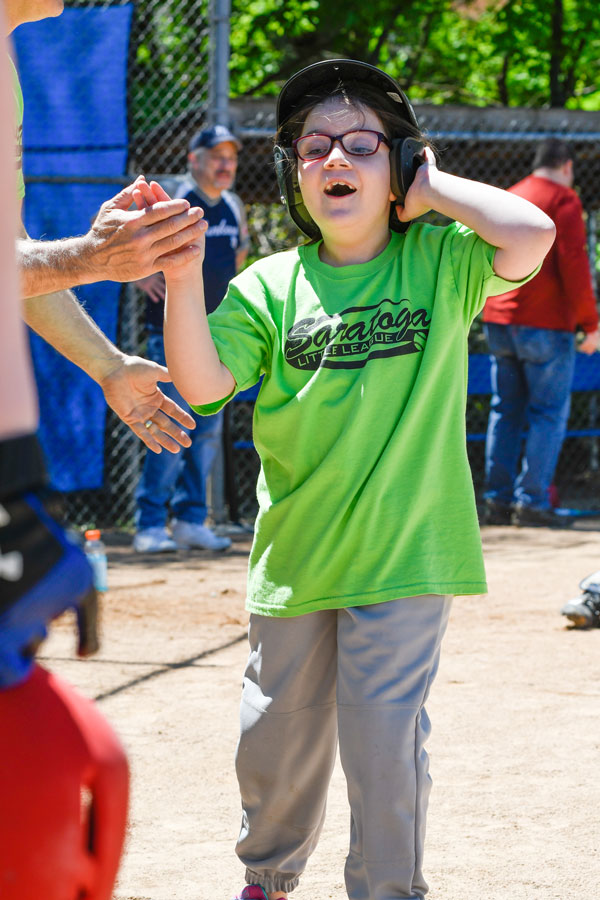 View the embedded image gallery online at:
https://www.saratogatodaynewspaper.com/today-in-saratoga/sports/item/9952-saratoga-springs-little-league-the-challenger-team#sigProIdf2c8db6ce0
Photos by SuperSourceMedia, LLC.
SARATOGA SPRINGS — Four years ago the Saratoga Springs Little League (SSLL) became more inclusive as they added the Challenger Division, for players of varying ages who have physical and intellectual challenges.
The Little League Challenger Division was nationally established in 1989. Robert Kelly and Paul Herbert, two parents and coaches of the Challenger Team played a hand in spearheading the nationally recognized Challenger Division to be a part of the SSLL.
Just as the program started – with invested parents – is how it continues to run. Many of the coaches are not only volunteers but parents as well. Having the parents be very hands-on is unique to a team such as this.
“With the parents there, there is a lot of coaching, so counseling, helping them, keeping their helmets on to be safe. Always talking to them, being close to them...whereas, on a typical team a coach is here, and a player is over there and they’re screaming at them - we’re right on the field with them,” said Kelly.
Before the games, players from other teams in the league will assist in warm-ups and teaching the Challenger players some techniques. The kids have a bit more freedom on this team from the positions they play, to how long they play.
“The biggest thing I try to keep in mind is that we want the kids to have fun and that each kid has different skill sets, so we try to work with each kid individually to help them to develop their skill sets or to at least make them feel part of the team,” said Herbert.
The Challenger team has had some players move up to playing on a typical team in the league – an opportunity which Kelly believe was able to happen because the child was able to get their initial try at baseball through the Challenger team.
Friday, May 31, beginning at 7 p.m. the Challenger Division game, ‘Under the Lights’ will be held at the West Side Rec Fields.
“We are so proud of our Challenger Division and all the volunteers and parents who make it possible,” Said Derrick Legall, President of SSLL. “Please come out and support them as they experience this well-deserved honor under the lights.
Read 826 times

More in this category: « Kathy's Comeback Athlete of the Week: Nick Winslow »
back to top