YMCA: Not Just A Gym, A Community 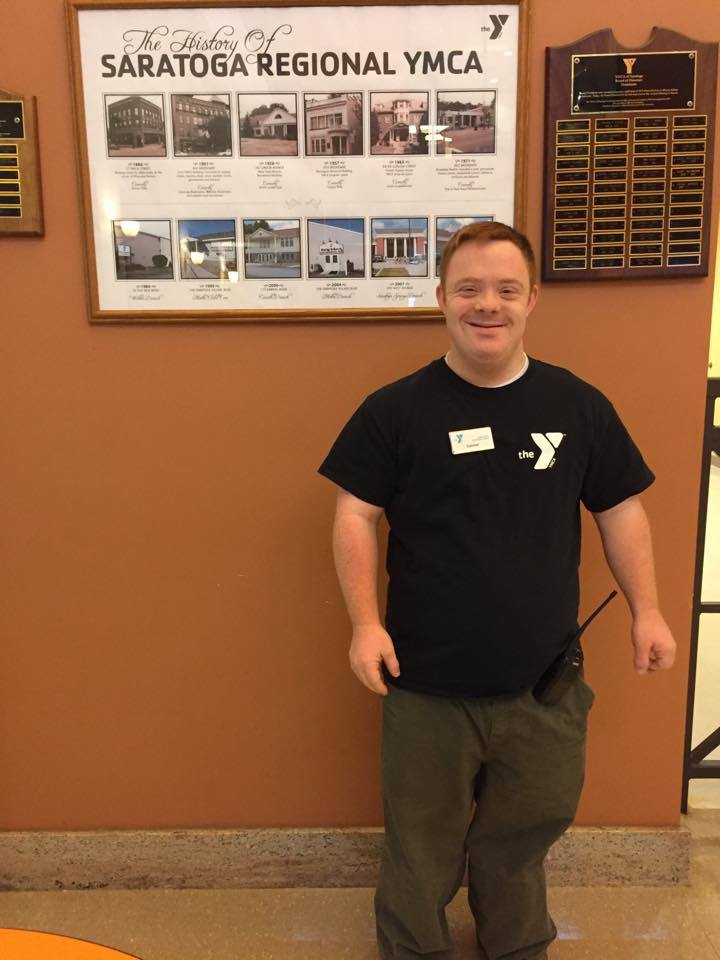 SARATOGA SPRINGS – The YMCA “is a lot more than just a gym. It encompasses everything. If there is anything someone is looking for, we probably offer it. Whether it’s childcare, aquatics, gymnastics, tennis. Even if we don’t have it at a specific branch, it is probably offered at one of our other Y’s,” said Mike Miakisz, marketing director of all Saratoga Regional YMCA branches.

Whether you are going to the YMCA to work out or participate in one of their many fitness classes offered, or take a dip in the pool, you will be greeted warmly by every employee you pass, and probably every member you see as well.

The Saratoga Springs YMCA (SRYMCA) is much more than a gym to its’ members, it is a place to gather and socialize, too. Allison St. Pierre, executive director, knows every member and employee by name and greets them without hesitation.

Their most popular employee seems to be Connor McEvoy, a young man who has been working in the custodial department for the last three months.

“When I first moved up here, which was in June of last year, I had no job and my mom, and my support team wanted me to get a job. I became a member here and then we talked to my now-boss, Chris Schumacher, and he got me a job as a custodian,” McEvoy explained.

“Connor is always in the fitness area lifting weights,” Miakisz said, “or he’s walking around the track listening to his music and singing. When he works, he always interacts with the members and it’s just fun to see them interacting. He’s smiling, they’re smiling. He always puts a smile on people’s faces.”

Gregory has been working out at the SRYMCA since 2009.

“This is a really great place, it truly is. Connor makes it a little better. I come in sometimes, you know I’m older, I get a little grumpy, but then I see him, and I cheer right up. He’s always in a good mood, he’s a good man,” Gregory said affectionately.

“I don’t want it to go to your head though,” he said to McEvoy, “because you do cause trouble sometimes.”

It’s clear the two men have a wonderful friendship, all because of the SRYMCA bringing them together.

Matt Murray, an employee, started off as a member, too.

“I was having problems with my hip, so my doctor said, ‘we’re going to replace the first hip, but you need to lose 30 pounds before we do the other hip.’”

Murray decided to follow his wife’s lead and join the SRYMCA and began to work with a personal trainer. He lost the necessary weight, had the surgery, and after having such a positive experience with the staff and other members, he retired from his job at the state where he had worked for the last 35-years and decided to work at the Y. He has been an employee for the last year.

“I feel wonderful, it keeps me young. Working here has been a great experience,” Murray said sincerely.

“We’re really unlike any other gym because of the relationships that people form here. These guys on our senior league basketball team will probably stay here for a half an hour to an hour in the café just sitting and socializing and having a coffee. It’s a really neat thing to see. It’s more of a community,” Miakisz said.

Financial assistance is provided to whoever needs it, no one is ever turned away from a membership.

“I think we gave over $500,000 in financial assistance last year,” Miakisz explained, “we’re always giving back to our community and that’s a big perk of us being a 501(c)(3) charity.”

Aside from all the fitness classes, childcare, and sports teams offered, SRYMCA also has a LiveStrong program which is open to anyone who has battled any illness, whether in the past or presently. It is a free program for people to get back on their feet with their fitness.

“It isn’t set up as a support group, but it forms into one,” St. Pierre explained.

Membership applications, pricing, and class schedules can be found at www.srymca.org. The SRYMCA is located at 290 West Avenue, with other branches located in Battenkill, Corinth, Malta, and Wilton.