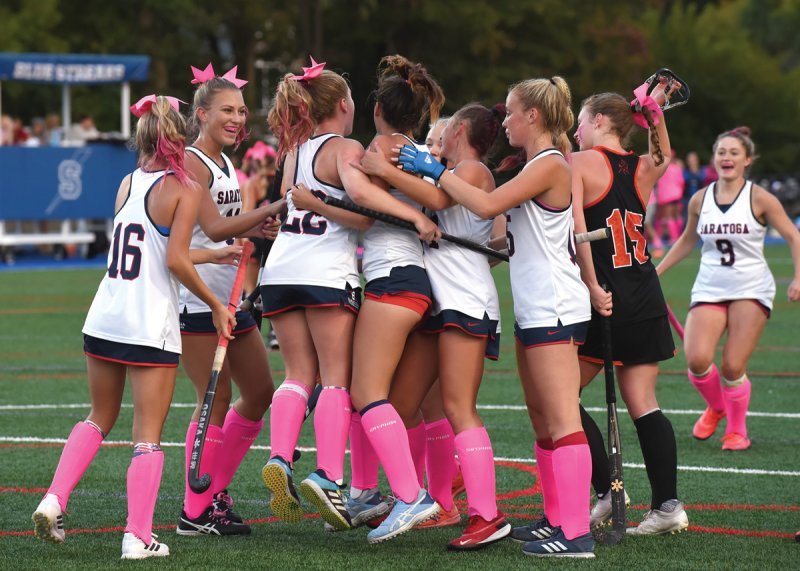 SARATOGA SPRINGS — On Monday, September 26, the Saratoga Blue Streaks hosted the Schuylerville Black Horses in their senior night game. The contest was also their annual “Go Pink” game, which aims to raise money and spread cancer awareness. The two teams share a special link through Beth Roberts, who lost a battle to cancer last year. Roberts spent 22 years as a special education teacher in the Schuylerville Central School District. Along with teaching, she coached field hockey and lacrosse in the Saratoga Springs district and Schuylerville district respectively. Both programs won championships while Beth was on the sidelines.

“We purposely picked Schuylerville,” Saratoga coach Jo-Anne Hostig said in a statement. “We wanted to play each other because we both had a personal connection and some players have even more of a connection. There are so many people in our field hockey community that have unfortunately had to battle with cancer.”

To kick off the scoring in the contest, Viviana Nicastro scored a goal off a corner play, assisted by Allie Shamberger with a few minutes left in the first quarter. After Saratoga took the lead, they never looked back. In quarter two, Allie Shamberger scored a goal of her own with the assist coming from Aubrey Ide. And in quarter three, the Blue Streaks finally put the game out of reach with goals from Alyssa Smullen (assisted by Maddie Miller) and Aubrey Ide who scored unassisted. The penalty corners totaled 13 to 4 in favor of Saratoga, and the shots were lopsided as well, with the Blue Streaks logging 21 to Schuylerville’s 3. Schuylerville’s goalie, Petra Gemage logged an impressive 16 saves while Saratoga goalies Lily Wilborn and Alexis Georgeadis logged 3 and 1, respectively.

Saratoga moves to an 8-1 overall record this season.

More in this category: « Saratoga Boys Soccer Improves to 6-0-1 in League Play The Girls Hit the Ice: Districts Combine to Form 1st Varsity Girls Hockey Team »
back to top