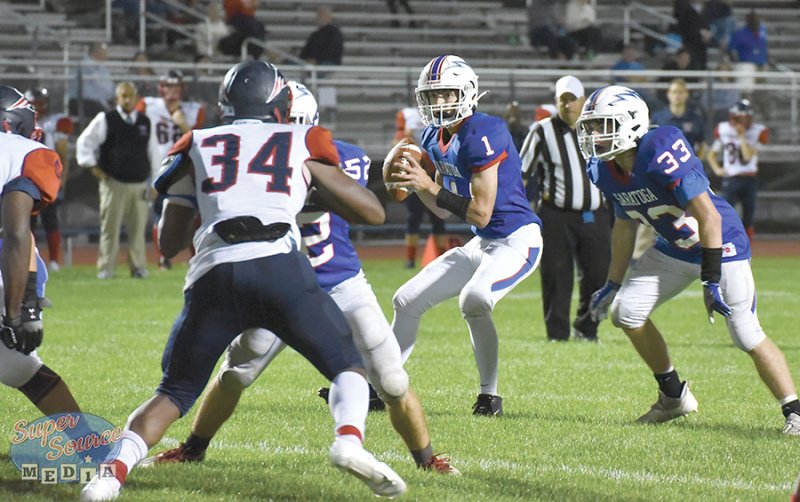 SARATOGA SPRINGS — It was a battle between the red, white, and blue as Saratoga hosted Schenectady on Friday, Sept. 24.  The Blue Streaks came away victorious with a 35-18 win over the Patriots. Over 2,000 people were in attendance for the Class AA football match and Saratoga’s homecoming game.

Schenectady’s Damire Smith scored the first touchdown of the game on a 4 yd. run after a 10-play scoring drive made by the Patriots. Jakiem Edge made an interception at the Patriot’s 1-yard line for a change in possession, stopping Saratoga from scoring in the first quarter.

But, as the fans rattled the bleachers 2 minutes into the second quarter, Saratoga’s Rodell Evans evened the score on a 1 yd. run. Schenectady battled back, with Moses Grant also scoring on a 1 yd. run. It was the Blue Streaks who walked away at halftime with the 2-point lead after Gordon Murray’s 20 yd. scoring run and a successful two-point conversion pass from quarterback Nate Siewert to Chris Youngs.

For the Blue Streaks, John Bidonde had 92 yards on 14 carries. Evans, also a quarterback, had 73 yards on 9 carries and completed 2 of 5 attempts for 21 yards. Siewert completed 5 of 9 attempts for 52 yards.

The Blue Streaks league record improves to 1-2, and they are on the road in Guilderland on Friday, Oct. 1.

Taking place at halftime during the homecoming game, The Best Buddies and Unified Sports programs unveiled a banner honoring Saratoga Springs High School’s as a National Unified Champion School. This distinction marks the highest level of achievement for Unified Champion schools in the nation. SSHS is one of 14 schools in New York State to earn this recognition.

Read 870 times
More in this category: « Sarah McMahon: Athlete of the Week Silver Warriors Homecoming »
back to top