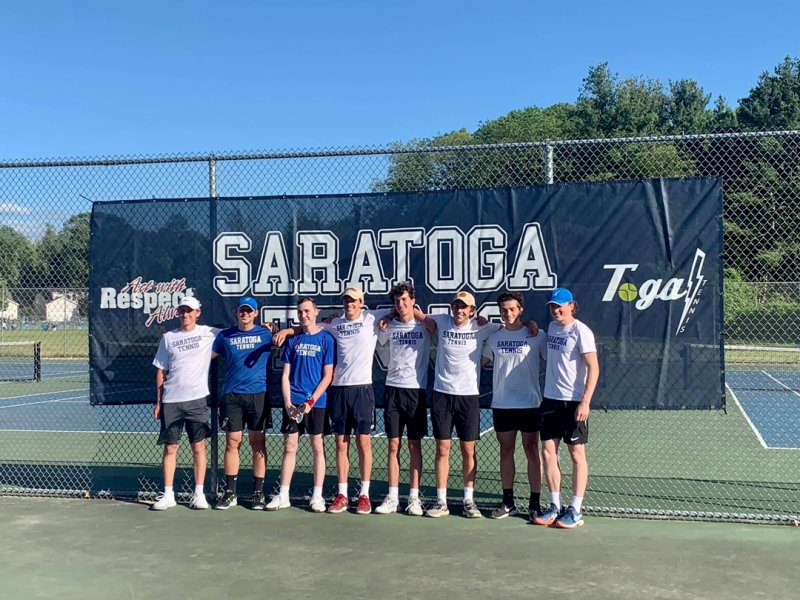 In a grueling match with a high heat index on Monday, June 7, Toga defeated Albany Academy with three singles wins and three doubles wins. The level of talent on both teams was also extremely high. In the 1st singles match, Nicholas Grosso fell behind in the 2nd set but was able to separate himself in the 3rd set and come away with the win against Will O’Brien. In the 2nd and 3rd singles matches, Andrew Blaha and Jackson Katusha, who were previously undefeated, lost to Dhev Jammula and Zain Magdon. In the 4th spot, Vincent Devito, a sophomore, defeated Theo Angelopoulos. There was another great win from eighth grader Liam Chartrand in the 5th spot, who defeated Nick DeMarco.

For the first time this season, all three doubles teams swept their opponents. In the 1st doubles match, Ryan Clancy and Kevin Rosas defeated Q Nigro and Will Frasier. In the 2nd doubles match, Devin Kim and Toby Webber defeated Jon Dailey and Arjun Nair. And in the 3rd spot, Nate Krackeler and Declan Ladd defeated Jonathan Farbman and Ethan Bowden.

Coach Rich Johns, who helps out the team, relayed that Head Coach Tim O’Brien was extremely pleased with the efforts of the entire team during their semi-final sectional match, and proud of how the doubles teams won their matches.

Toga Varsity Boys’ Tennis will advance to the Section II AA Finals against Bethlehem at Central Park in Schenectady. The match was originally scheduled for Tuesday, June 8, but was cancelled due to weather, and has been rescheduled for Monday, June 14 at 3:30 p.m.

In addition, Section II’s tournaments for individuals were held on Wednesday, Thursday, and Friday (June 9, 10, and 11), also at Central Park in Schenectady. There will be no state tournament this year for tennis.

Read 422 times
More in this category: « NYRA To Host Job Fair June 11-12 For Saratoga Race Course Summer Meet Explore the Great Outdoors This Summer at West Mountain »
back to top