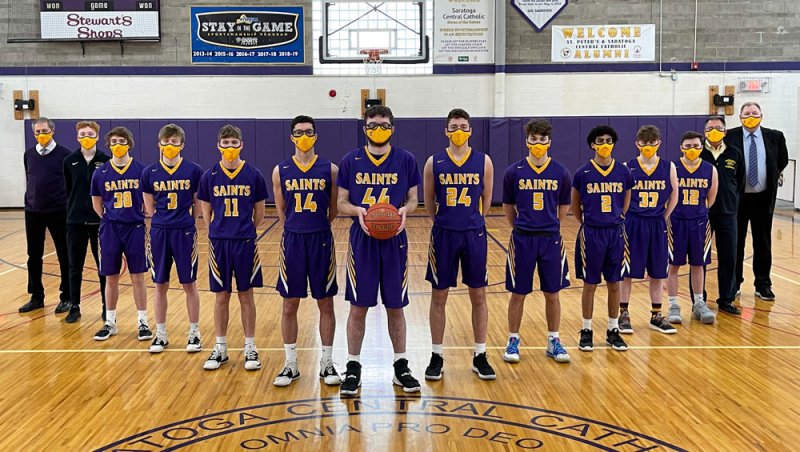 SARATOGA SPRINGS — The Varsity Boys’ Basketball Team at Saratoga Central Catholic School is adjusting to a new coach and playing basketball during a pandemic.

Bill Haskell, Head Coach of the Varsity Boys’ Basketball Team at Saratoga Central Catholic School, has been coaching for 41 years, with most of his career spent as head coach at SUNY Adirondack. When he retired, he was asked to come help the program, and this is his first year as head coach at Saratoga Central Catholic School. According to Coach Haskell, this season has been the most difficult in all of his 41 seasons. However, his assistant coach, Bill Luciano, and the JV boys’ coach, Daniel Kumlander, along with the boys on the team, have made the transition and COVID adjustments easier to handle.

The team’s season started Feb. 1 after getting clearance from the Saratoga County Department of Health, and within six days they had their first game. They have a 14-game schedule within the makeshift league formed by Saratoga County, and are finished playing by March 13. They play Tuesdays, Fridays, and Saturdays. Coming up this weekend (Friday, Feb. 26 and Saturday, Feb. 27) is a tough series with Mechanicville, one of the top teams on their schedule.

The team is fairly young, but has varsity experience, with three seniors, one sophomore, and some juniors who played on varsity last year as sophomores. The team’s leading scorers are senior forward Hayden Day (#14), junior guard Robbie Bolen III (#3), and junior guard Anthony Barile (#5). Day, who is also the team’s leading rebounder, and senior forward Aiden Lambert (#24), a rebounder and 3-point shooter, are team captains who contribute greatly and keep the team’s spirits high in their leadership positions.

Versatility is the team’s greatest advantage, as they have players skilled at multiple positions and their offensive skills are spread out amongst the team. As well, based on percentages, their 3-point shooting is strong. The team is working on Coach Haskell’s slower style of play and how to overcome being outmatched physically.

“The formula we try to follow is our shooting percentage, offensively, and defensively, to rebound and have fewer turnovers than the other team,” said Coach Haskell. “That overcomes the discrepancy in size.”

Other new challenges for the coach and the team include: being able to hear each other from opposite sides of the court through their masks, drawing up plays on the whiteboard while being socially distant at time outs, dealing with mental and physical fatigue from back-to-back games, and also the lack of fans in the bleachers.

“I tell my guys, you have to create your own energy, because the way that you warm up and the way that you prepare for the game makes up for the lack of fans,” said Coach Haskell. “I think they are just so thrilled to be out there playing that it doesn’t matter if there are people watching or not.”

However, he does believe that these games are providing a sense of normalcy during the pandemic. And, although there are no sectional or state championships at the end of the season, he still expects his team to put in the effort and enthusiasm.

“I never talk to our team about winning,” said Coach Haskell. “I always feel that if you execute offensively, play together, communicate, really work hard on defense, battle on the boards, and do all the right things, then you have a chance at the end of the game [to win].”

You can check out the team’s website for their schedule, record and stats, player profiles, and more at www.sccbasketball.com.

SARATOGA SPRINGS — The Saratoga Central Catholic School Varsity Girls’ Basketball Team is proving that they can adapt to this season’s adverse conditions.

The team’s season started on Feb.12 and ends on March 13, with only a week of full-contact practice before they had their first game. They have a 14-game schedule, and are playing three games a week – Tuesdays and back-to-back home and away games on Friday and Saturday. The Varsity Girls’ Basketball Coach, Regan McFerran, believes that their biggest challenge so far this year has been the limited time frame to prepare for games.

The girls’ program has also seen some limitations with numbers, and they have no JV team this year.

Their roster includes six varsity returners (four seniors and two juniors), as well as three more juniors, sophomore, and freshmen. They have six strong starters, and strong players coming off the bench. Junior guard Ashley Upson (#4) is their leading scorer, and senior forward Molly O’Reilly (#30) brings great defensive energy. As a team, their strengths are defense, and something else you can’t necessarily teach in practice.

“Our greatest strength with these girls is their resilience,” said Coach McFerran. “They are a group that is highly motivated, and their work ethic is unbelievable.”

Per a decision made by Section 2, there are no spectators allowed at the game, resulting in an unfamiliar gym atmosphere that might be hard to overcome for some teams – but not for these varsity girls.

“With a sport like basketball, energy in the gym is something you look forward to, something that can play a role in a close and competitive game,” said Coach McFerran. “The girls have done a great job of providing their own energy and understanding that they have to bring it every single day for themselves and their teammates.”

Even with no sectional or state championships this year either, the team is still looking on the brighter side of this season.

“These girls are happy to be here and to be playing a season they were not sure they were going to get,” said Coach McFerran. “So, my biggest expectation for them, and our biggest emphasis has been, don’t take these games for granted…leave it all out on the court and get better every day.”