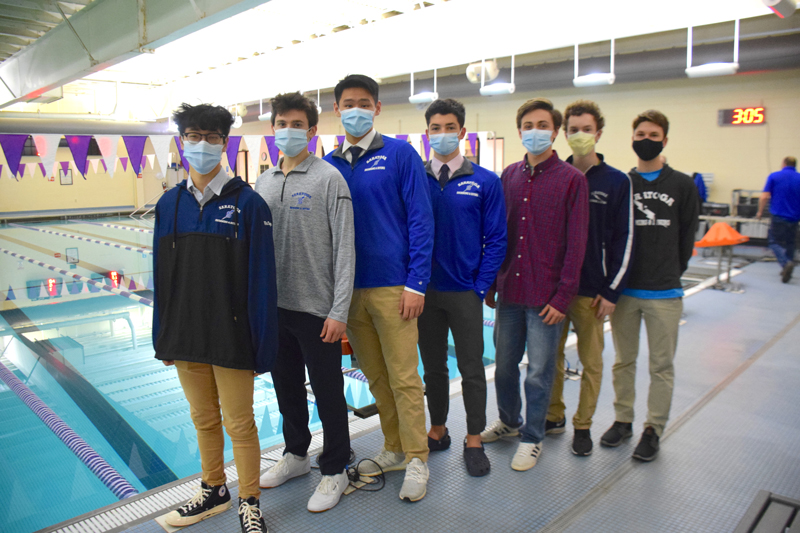 The Saratoga Springs High School Varsity Boys Swim Team is still finding their sea legs after being thrown into a season unlike any other.

“We’re playing it by ear and doing a week-by-week evaluation of where we’re at,” said Coach Bill Asay.

“It’s a work-in-progress,” he continued. “In a lot of ways, I’m experimenting, and if it’s not working, I adjust.”

NEW POOL, NIGHT OWL PRACTICES & ADJUSTING TO CHANGE
Adjusting to a season with a start date that was delayed until December 14, (a month and a half later than usual), the team is also swimming in a new location this year – at the Saratoga Regional YMCA on West Avenue.

“Everybody is trying to make-up for time lost. No one’s been in the water as much this year, so we’re trying to get as much time in now as we can, get everyone in shape, and go from there,” said Asay.

Fitting in practice time at the gym means training after hours. The team has only 18 swimmers (instead of their usual 22-24 because they cannot have divers compete) and is practicing for two hours, four days a week, from 8 to 10 p.m.

“It’s not easy, that’s for sure, but it’s a pool, the Y has been very generous, and it’s working out pretty well. I’m thankful for the season as a whole,” he said.

FORCES TO BE RECKONED WITH
In the quest to find their way, the Blue Streaks aren’t afraid to mix things up.

Competing in meets virtually, for now (a decision which may be reevaluated by the Suburban Council in time for next month’s championships) means that they have no way of knowing what they’ll be needing to swim to beat their opponents’ scores.

Instead of letting it get them down, Asay is using his 20 years of coaching experience with the team to lead them on a different path – he’s changing things up and using their versatility to their advantage - a strategy that could give them an edge over the competition.

Seniors Jason Zheng and Luke Beringer are strong competitors in any event the coach decides to have them swim on meet day.

Meanwhile, sophomores Conner and Calvin Baird are a dynamic duo – twin brothers whose different styles complement one another.

While Calvin likes the distance swims, Conner is more of a sprinter. Together, they are creating a real underclassman force to be reckoned with on the Blue Streaks’ team.

So far, they’re 1 in 1 – Saratoga won their first meet against Schenectady High School but lost to Bethlehem. This week they compete against Shaker and next week will be swimming against both Burnt Hills and Niskayuna.

“I have a really dedicated group of boys who are working hard and enjoying the sport. I’m sure they miss some things this year, but I think their spirits are up pretty good,” said Asay.