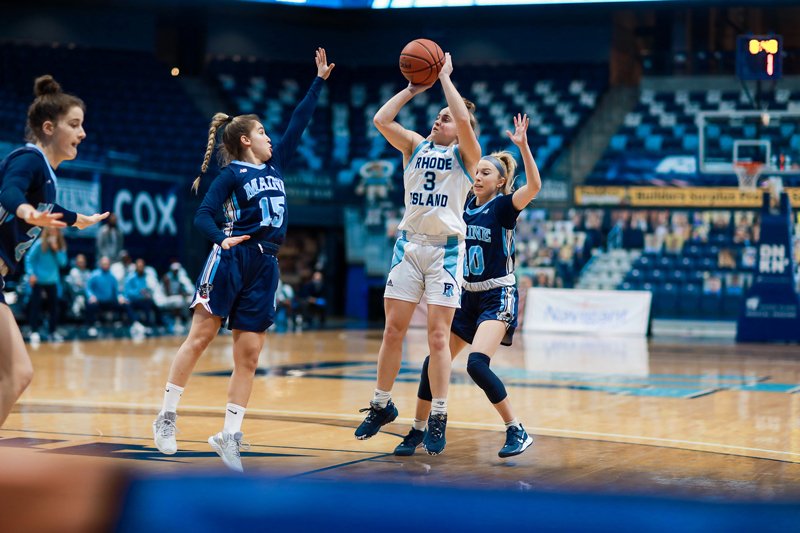 The absence of a live audience is weighing heavily on college players this year, including local basketball superstar Catherine “Dolly” Cairns.

While aggressive and noisy jeering can sometimes be unsettling, it can also be what motivates a team toward victory. Boisterous cheering from the crowd can boost players’ performances and turn the sport into a joyful experience for everyone.

“In high school, I knew most of my fans and everyone in the stands. This year it feels so different because there are no fans,” she said.

To help maintain COVID-19 safety precautions, spectators are not allowed at games this season.

Cairns began playing varsity basketball in the middle of her 7th grade year and earned a record-breaking 2000+ points in her career. After being highly sought-after by recruiters, she is now playing NCAA Women’s Division 1 basketball for the University of Rhode Island and the Atlantic 10 Conference.

Hearing from her high school coaches and others in the high-school program makes her day.

“It’s really nice because it makes me happy,” she said.

Her biggest fans during her freshman year at college are her parents.

“My parents keep me going. We’re best friends and talk every single day. That home-grown support means the world.”

TAKING IT DAY-BY-DAY
During this unpredictable time, when two games have already been cancelled and the rest can only be penciled-in, building trust has become essential.

“It’s the mental part that’s the hardest for me. Not knowing if someone in Tier 1 will test positive, I just have to take everything day-by-day and not be able to look forward to anything,” said Cairns.

The Rhody Rams record is showing this uncertainty – they are currently 0-4. With teamwork however, Cairns thinks things could still turn around.

“The biggest thing is having support around me. I work with great trainers every day, supportive coaches and teammates who have each other’s backs,” she said.

In a recent game against the University of Maine, Cairns put in a strong start and a solid 40-minutes of play.

“My goal is to win. It hasn’t been going well yet here, but I still have hope.”

GETTING THE KINKS OUT
Cairns is hopeful that the URI team will be able to iron out the kinks.

“We have some things to figure out but I have a lot of trust in my coaches that they can make this change happen for us. My goal (and the rest of the team’s goal) is that we want to win and to play the best that we can,” she said.

If anyone has proven that when things seem impossible, it doesn’t mean they are, it’s Cairns.

“It can only get better. We’re in the middle of the hardest part right now. Slowly, it’s going to get better and there’s not going to be as much adversity.”