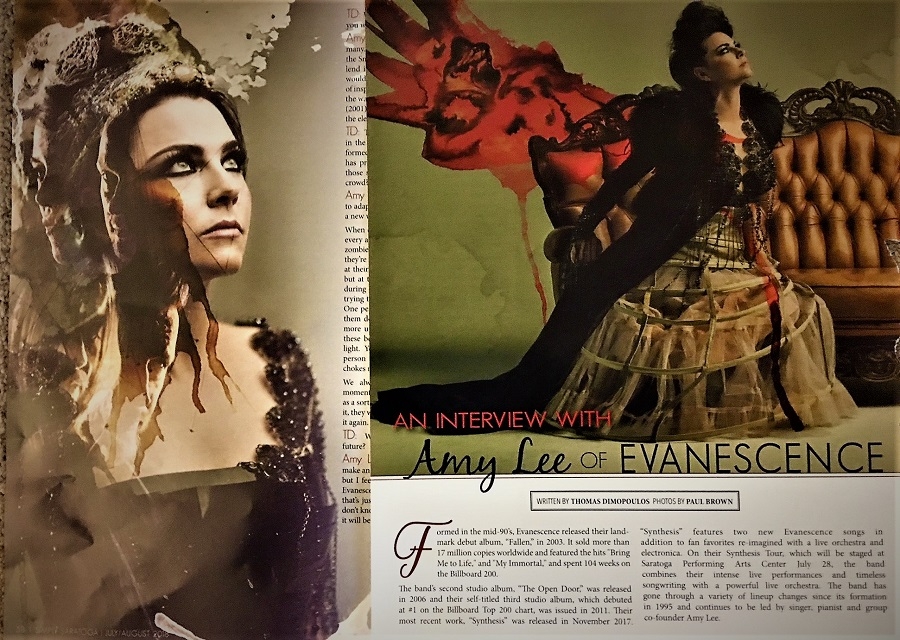 SARATOGA SPRINGS – As an artist, Amy Lee is restless, as all artists with anything worth saying must be: searching; growing and endlessly re-defining.

“Challenges,” she says. “Pushing myself to the next place. At this point in my career, the challenges are the fun parts.”

Seeking a different path led the lead singer and co-founder Evanescence, perhaps surprisingly, down a road previously traveled. Once there, she discovered secret passageways with untainted, offshoot roads that pointed to some new place. She named this synergy between past and present “Synthesis.” An album was released last November and the summer leg of the tour - which features co-headliner Lindsey Stirling – will play the big stage at Saratoga Performing Arts Center on July 28.

The show includes the added dimension of a full orchestra – an orchestra not touring with the band mind you, but rather, a different orchestra with an entirely new set of musicians on each night who will perform with the band.

“It makes for a very high-energy, tightrope-like feeling and in a very beautiful way different every time,” Lee says. “It creates these very raw, vulnerable and quiet moments where you have to just be so comfortable in your own skin that you totally focus and make beautiful music. That’s what makes it so exciting to me, to do something so different.”

The band first meets the orchestra on the day of the show during soundcheck where they’’ll run through parts of three or four songs then collectively perform live together for the first time in front of a live audience. Some live collaboration between Lee and Stirling during each of their respective sets is anticipated as well. Setlists from the early part of the tour indicate songs that span the band’s career from 2003 to 2018, as well as an occasional nod to the Beatles “(Across the Universe”) and Ozzy Osbourne (“Alive”).

As nerve-wracking and exciting as staging a performance in front of a live audience for the first-time may be, Lee says the addition of an orchestra creates “an electronic, awesome, cool different world.” Allowing her imagination to run free, Lee says she can envision some of her own favorite bands doing likewise.

“I think it would be really good to see the Smashing Pumpkins do that. That would lend itself to it very well. And Portishead - Oh, that would be incredible! I’ve always gotten a lot of inspiration from Bjork and if I could go see the way she did “Vespertine” back in the day (2001) – it was sort of in this realm between the electronic elements and the orchestra.”

Evanescence formed in the mid-1990s and released their debut album “Fallen” in 2003. Commercial success was immediate; the album topped the charts in more than 10 countries and sold more than 17 million copies worldwide. Lee, the group’s sole original member in the band’s current incarnation, was tagged as a goth-metal superstar in Victorian dress.

“After our first album, ‘Fallen,’ I felt a serious urge to push us forward and show other sides. It was good, but it was just this bud, this beginning picture of all that I wanted to express and all that I am. It became important to show something else. I always want to keep that open, to try new things,” she says. “To the degree that ‘Fallen’ was so huge, I felt almost frustrated that no matter what I did there’s a mass of people that are going to see me in just that one, simple, first way.”

Over the course of the band’s career, the business of music and concerts has drastically changed. Lee has changed with it.

“We used to have lighters that we’d hold up in the audience, which was so beautifully romantic and sweet. Then people got cell phone with those lights which are so much brighter. I remember when that first started to be a thing, every artist was complaining, ‘Ah, they’re like zombies, they’re not even paying attention to the live show,” she recalls.

“We always want people to live in the moment, to live in the show, but I do take it as a sort of compliment: that they want to capture it, they want to remember it, they want to live it again. At the same time, we have this moment during special shows where we’ll have this… moment. One person with a cell phone and their light does it, then somebody next to them does it, then more and more and more and they all light up to make like these… glowing souls. Just this sea of light. It’s hard to explain, but you feel the magnitude as if in that moment every person is represented; everybody gets into it and it just chokes me up. Every time.”

Over the past 15 years, Lee expanded her collaborative circle to include recordings with Seether and Korn; she sang “Halfway Down the Stairs” – a song based on the lyrics of an A.A. Milne poem - for a cover album of Muppets songs in 2011, and one year later performed Hank Williams’ “I’m So Lonesome I Could Cry” for a Johnny Cash tribute album. In 2018, there are a multitude of creative reaches. “We’re just stripping all of my comfort zones away,” she says.

With “Synthesis,” Lee is re-imagining the band’s musical canon by collecting the shards of a melody once gifted from some ethereal place, disassembling its pieces, and then welding them with a new flame into a new composite.

“There are parts of these songs (on ‘Synthesis’), particularly the ones I chose, where there was something about them that stood out to me, or that I wanted to push more. There was a stripping away involved and rebuilding for sure, but it’s all stemming from stuff that was all in there, underneath,” Lee explains.

“‘Never Go Back,’ for example - our first song on this album - is a very classically minded song, which is funny because production-wise it’s this heavy rock song with swatches of metal. But, it’s so related. If you think about the instrumentation and the production of music, I feel there are so many similarities between heavy, metal music and the shredders of the classical age. I mean, you could Bach up against Pantera and find total similarities,” she says with a laugh.

“I’m not saying we’re Pantera, or Bach – nothing like! But there was always this part, this big, epic beautiful bridge in ‘Never Go Back,’ that in this version now starts off the song that to me was channeling some big, classical epic drama. I wanted to experiment with taking that all the way in the other direction, seeing what it sounded like and being able to let it live in that world where it was partially born in the first place. The whole (‘Synthesis”) is kind of like that, taking things and going: here’s the other side of it that maybe you didn’t notice.”

The idea for “Synthesis” was born after Lee sat down and revisited the band’s musical history in advance of the release of a comprehensive Evanescence box set.

“I realized how proud I am of everything that we’ve done. Instead of thinking that I have to keep pushing in new directions to show everybody how different we can be, I kind of fell in love with all of it and wanted to spend a little bit of time embracing all that we are,” Lee says. “Instead of feeling that my favorite parts are the parts that I’m running from, I can go back and pour more love into who I already am. I have a new perspective on what Evanescence is and it means something to me that’s just full of love in all directions. So, I feel that’s been a beautiful turn in my heart more recently. And I don’t know what the future sound will be, but I do know it will be out of love.”

Evanescence and Lindsey Stirling will perform at SPAC on Saturday, July 28.