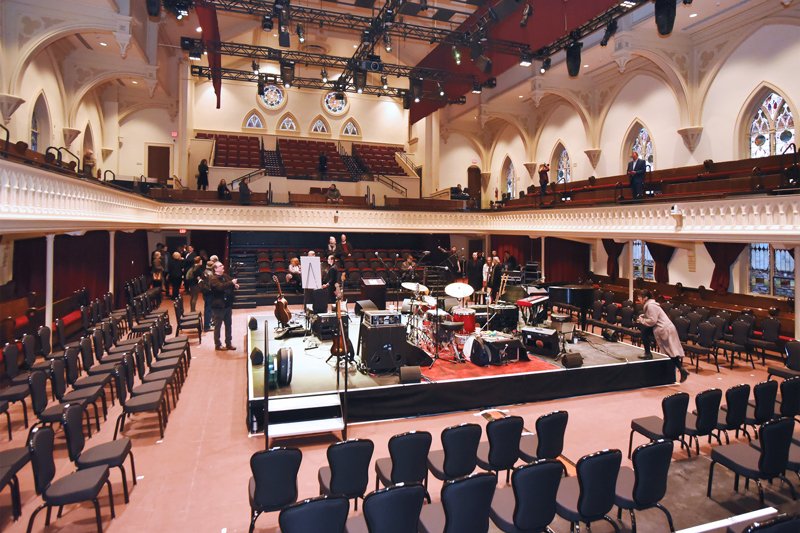 SARATOGA SPRINGS — One year after battening down the hatches in response to the oncoming 2020 pandemic, area performance venues are starting to piece together their plans for reopening.

“The one-year anniversary of shuttering the venue, with no clear end in sight - but then came the sudden news that performing arts venues in New York State are allowed to re-open at 33% capacity on April 2,” said Caffè Lena Executive Director Sarah Craig, in a posting on the venue’s website. “It means we can stop treading water and we can start swimming toward a goal.”

The café plan is to reopen April 2 with safety protocols in place. While guidance would allow 35 people at the venue, the capacity will be limited to an audience of 24.

“We won’t serve food and drink yet. That means masks can (must) stay on from entry to exit,” Craig said. “We’re getting the air filter systems that we didn’t think we’d need ’til September. Even so, we’ll keep the windows open a little. Wear a sweater.”

Caffè Lena first opened in May 1960 as a small beatnik coffeehouse, Bob Dylan first visited the club in 1961 and played a full weekend of shows for which he was paid a total of $50. Appearances by Rosalie Sorrels brought admirers like Hunter S. Thompson and William Kennedy to the venue, and in the fall of 1965, Don McLean made his first of his many appearances at the café.

In the 12 months since everything shut down, the café counts 209 livestreams it had broadcast and $100,000 raised for musicians.

In the meantime, Lenas continues to broadcast a slew of productions via its online platforms. For more information, go to: caffelena.org.

“We’re at the beginning of the end,” Gov. Andrew Cuomo said, during his March 9 presser. “The end is the vaccine. The vaccine is the weapon that wins the war. It’s going to still be an annoying few months, but we’re getting there.”

“We will open the hall in July for the School of the Performing Arts for Kids – a rock music camp for middle-schoolers, and our goal is to become an exhibit hall in the summer,” says Teddy Foster, campaign director at UPH.

“I don’t know what April will bring, so right now we are holding tight, but we will be doing another exhibit this summer – which was our plan all along, to become an exhibit hall in the summer and put on really cool, family-friendly exhibits which will also help draw people downtown.”

Last year’s interactive summerlong exhibition featured music-themed pinball machines and memorabilia from the Rock & Roll Hall of Fame that featured artifacts used by everyone from Dolly Parton to Alice Cooper.

“Even in the middle of the pandemic last summer our pinball exhibit brought in 2,000 people,” Foster says. In “normal” times, UPH anticipates it will serve an estimated 65,000 visitors per year, with a $3.5 million annual economic impact as a year-round venue space, according to a statement issued in 2018,

The building was erected in 1871 and served as a Methodist church for its first 100 years, as well as playing a role in the city’s civic life by providing a venue for visiting statesmen including Teddy Roosevelt, William Howard Taft, William Jennings Bryan and Frederick Douglass. But by the 1960s, it had fallen on hard times. Local preservationists organized a nonprofit group and helped save the structure. More recently, Foster oversaw an operating alliance created with Proctors, and a $13.5 million renovation project that followed was celebrated with a fabulous opening night performance featuring Rosanne Cash last Feb. 29 to re-christen the grand hall.

This coming summer’s exhibition, which Foster didn’t identify by name, is currently being negotiated and anticipated to open in late July for a display that will be active for a number of months. When the venue does reopen to the public, everything will be staged in a safe manner, Foster says. “One of the things that makes UPH so safe to be in is we have an extremely high-tech HVAC system and we clean like maniacs, so people will be able to come into our building with confidence because it’s safe.”

For more information about UPH, go to universalpreservationhall.org.

More in this category: « Conversation: Community Impact of Performing Arts in Saratoga Home Made Theater: On The Air Series Starts March 14 »
back to top