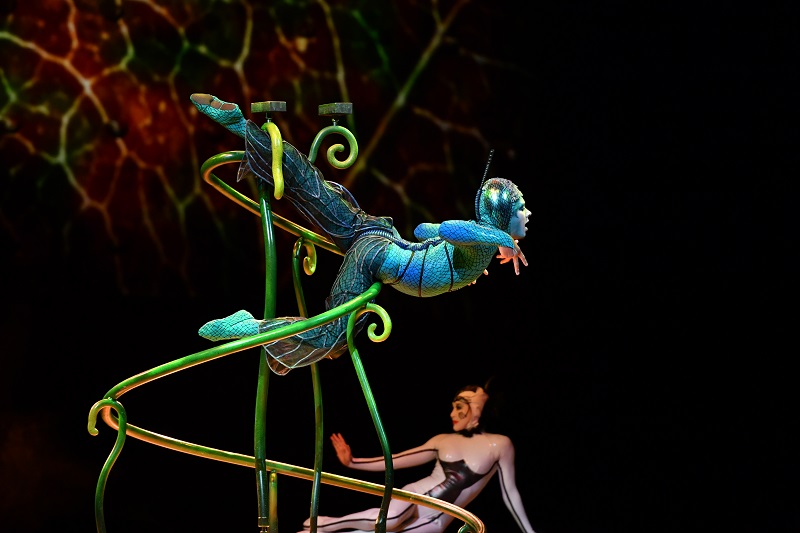 CRICKETS TAKE FLIGHT ATOP TRAMPOLINES. Spiders spin silky threads. Red ants juggle kiwis and corn and a dragonfly balances along the slender stalks of a plant.

Together, the graceful actions of all this energy in motion depicts an ecosystem bursting with life and the basis of the Cirque du Soleil show “OVO,” which takes the stage for six performances at the Times Union Center Jan. 29 - Feb. 2.

“I find the show very colorful and great for all kinds of audiences, especially for kids,” says Alexander Grol, who in his guise as a beetle in OVO’s Russian Cradle act has a unique point-of-view of the awestruck “insects” whose intense curiosity is heightened when a mysterious egg appears, representing the enigma and cycles of their lives.

“The show is quite good in its balance of the different things and I’ve heard people saying some very nice things about many of the different acts,” Grol says. “There are very strong acrobatics and when I have overheard people talking about their favorite acts, it’s usually about the slackwire performance, which is absolutely insane. There are very few people I’ve ever seen who can do that kind of act. Top-of-the-notch acrobatics,” he says. “Personally, I like what I do! I would say it’s my favorite, haha.”

Grol’s job description of his role in the flying act segment?  “I throw and catch people for a living,” he says, with a laugh. “I’m the one throwing and catching the acrobats.”

Originally from Kiev, Ukraine, Grol was born into a traditional circus family. “Much of my life has been on the road, from the time with my parents when I was a boy. I grew up quite fast and they kind of integrated me into the show, which was the Moscow State Circus, traveling the U.K. for a while. That was the first circus I started in.”

He joined Cirque du Soleil in 2008 with the stage production of “Zaia,” which was based in Macau and represented the company’s first resident show in Asia. In 2011 he joined “OVO.” He says he’s on the road with the show a few months at a time, interrupted by occasional two-week breaks, and when not performing he enjoys reading, keeping in shape and exploring cities where the tour takes him.

“Every time we move to a different city, we have a day or two to go out and explore,” Grol says. The loudest crowds?  Latin America. “We had full houses every day and they were screaming their heads off! That was fun.”  He is partial to the west coast - California and Oregon specifically, the rich landscapes of Colorado, and the cultural sophistication of Japan.

OVO, which first premiered in Montréal in April 2009, celebrated its 2,000th show in February 2015 in Fukuoka. “Japan I like very much. The politeness is one reason.  And it’s super-clean there; neat and tidy. I found it very different from the rest of the world.”

The name OVO, which means “egg” in Portuguese, represents a timeless symbol of the life cycle and birth of numerous insects and depicts the underlying thread of “OVO” the show – which marks the 25th live production from Cirque du Soleil.  With an international crew representing 17 nationalities, “OVO” has visited more than 30 cities in six different countries as a Big Top show before transforming in an arena show in 2016.

The seeds of Cirque du Soleil were first planted in the early 1980’s, when a troupe of performers took their talent to the village streets on the shores of the St. Laurent River near Quebec City with a crew jugglers, dancers, fire breathers, and musicians. In 1984, the show traveled on a province-wide tour and three years later crossed the Canadian borders for the first time, with a tour of the U.S.

Today, it sites its headquarters - “a laboratory of imagination”- in Montreal where 1,300 artists hailing from 55 different countries form the current Cirque du Soleil team. Since 1997, all shows have been created at Cirque du Soleil’s International Headquarters.

One wing of the headquarters includes three acrobatic training rooms, a dance studio, a studio-theater, and a gym where preparatory training – which can last anywhere from a few weeks to a few months – is conducted before joining a shows cast.

Every year the costume workshop uses more than 6.5 kilometers of fabric from around the world to create intricate stage outfits and sets, and the musical score is written by company composers, creating shows that feature original music

More in this category: « Holly Near to Perform at Caffe Lena Sunday Chowderfest 2020: Details & Information »
back to top