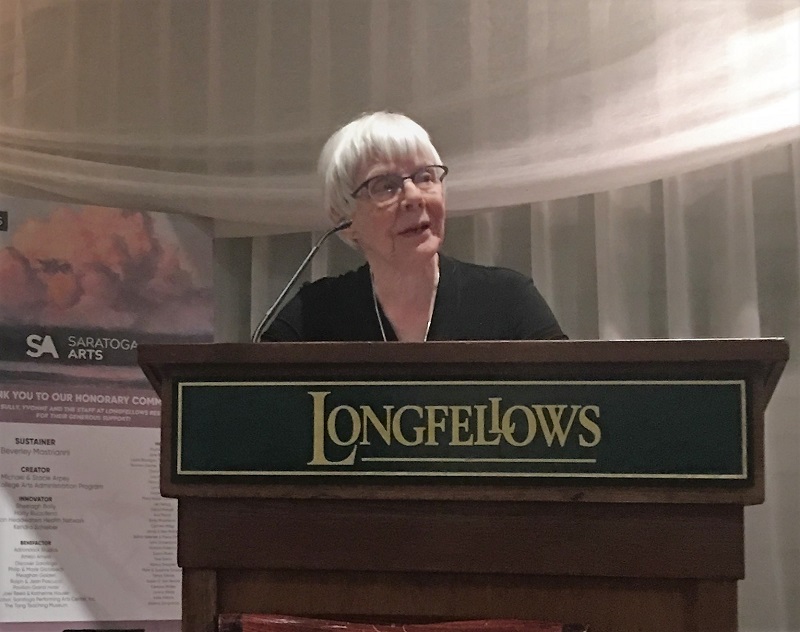 SARATOGA SPRINGS – It. Starts. With. Art. “Wherever your passion is.  Community starts with art. Economies start with art,” Saratoga Arts Executive Director Joel Reed explained to the crowd gathered for Saratoga Arts’ Soiree at Longfellows Restaurant on Nov. 13.

“We all know how important cultural tourism is. It contributes that wealth to the hospitality industry, to sales taxes, to keep Saratoga Springs growing,” Reed said. The cultural traveler spends 60 percent more than the leisure traveler in the U.S., according to a 2013 Mandala Research report. And some local communities are realizing that benefit. The village and town of Lake George, for example, have contributed portions of tax monies collected for the rental of rooms in their communities  – known as a bed tax – to fund music festivals and events which then in turn bring more people into the community who subsequently spend money at local businesses and stay in local hotels.

Since its founding in 1986, over 1 million people have come through programs and events run by Saratoga Arts, and more than $3 million has been paid to artists and arts organizations in the local community. In 2018 alone, over 42 grants were awarded totaling $125,000 and 78 exhibitions presented in the region, resulting in over 700 artists showing their work locally.  This year’s fundraising soiree raised about $20,000, Reed said.

Since 2012, Saratoga Arts has honored the work of a variety of arts advocates in the region - Mona Golub, James Kettlewell, Elaina Richardson, Marie Glotzbach and Dee Sarno, among them. This year, the organization honored Hudson Headwaters Health Network and Beverley Mastrianni.

Hudson Headwaters Health Network currently hosts 175 local works, either on loan or as part of Hudson Headwaters’ permanent collection, which are strategically placed for patients to enjoy in 19 health centers from northern Saratoga County to the Canadian border.

Artist and Arts Advocate Honoree Beverley Mastrianni has helped shape the arts and cultural organizations across the region for over three decades – helping found Saratoga Arts and the Saratoga Springs Preservation Foundation and holding leadership roles with the Urban Cultural Park Commission, Saratoga Springs History Museum, the Brookside Museum in Ballston Spa, the Arts Center of the Capital Region in Troy, and several other organizations.

“Anywhere in town you stand and look, we feel her work and impact every day,” Reed said, introducing Mastrianni, who took to the podium and recalled first settling down in Saratoga Springs in 1968.

“Downtown Saratoga was just deserted, there were 22 vacant stores, deserted except for a building where up on the second floor all the apartments were rented by artists,” she said.

In the afternoons, she would take her children to arts workshops and classes, which were spread out among houses all over town. The YMCA had just opened a new center on Broadway with a swimming pool and activities for kids. She was asked to join the organization’s board.

“They put me on the fundraising committee where I learned more about the city: who gave money and who supported these sorts of things,” explained Mastrianni.

While taking classes at Skidmore College, she was approached by Anne Palamountain with an idea to create a more visually appealing downtown during a two-week stretch in the summertime when families would visit the college.

“We went to the high school and we got everybody. Every kid who played in a garage band or who was involved in art,” Mastrianni said. “We got artists to start bringing their works downtown and putting them in stores. That went on for quite a few summers, and it really helped.”

She also revisited a time when the city was looking to sell Congress Park and the Canfield Casino to a hotel chain from Pennsylvania who wanted to put up a hotel and a windmill and use the casino for meeting rooms.

“There were a bunch of activist women who were really against that. They were really amazing, and a lot of fun,” Mastrianni said. “Minnie Bolster had started to revive the historical society upstairs in the casino and didn’t want it sold, so, we worked on that. The thing that really prevented it from happening?  The lower part of Putnam Street and the park flooded a lot, so the developers decided that wasn’t a good place for the hotel. Left with the casino, a group of citizens who called themselves The Pillar Society started to get together and hold parties in the casino to raise money for its restoration.”

The stained glass was returned to the building and restored, and Mastrianni ran an art gallery featuring contemporary art within the casino structure. “One thing just led to the other, to the other,” she said, adding a story about the time a spirited group of locals had also successfully lobbied to site the arts center on the southeast corner of Broadway and Spring Street. The Arts Center landing followed the relocation of the public library to its current Putnam Street location as the city had designs on placing its court system there.

“There were an awful lot of people who worked on all these things and enjoyed doing it. The city is flowering now,” she offered, tempering her enthusiasm with a warning. “The problem we have is (while) showing art and artists from all over the region, there are very few artists who can afford to live in Saratoga now because the prices have gotten so high.  Caffe Lena is doing a wonderful job, but there is no place for our musicians and artists to work. A lot of our artists are leaving us to go up to Glens Falls; A lot are going to Troy; There are a couple of art galleries open in Schuylerville now - but we’ve really got to address the issue of how we’re going to keep our indigenous artists in Saratoga Springs, because they’re living outside of town now,” said Mastrianni whose artwork has been exhibited at the Tang and the Schick Gallery at Skidmore, the Albany Institute of History and Art, and is held in many private and corporate collections in North America and Europe.

“I think the Arts Center does fantastic work – we’ve got a lot of stuff going on at Skidmore and The Tang, at Zankel - but we haven’t got the body of musicians and artists who live here and really enrich our lives on a daily basis. I think we should really be thinking about how we’re going to address those issues - so that we’re not just a big shopping mall, so we’re not just a restaurant city, so that we really are a city that supports artists who live in the city,” Mastrianni said. “That’s our next challenge.”