SARATOGA SPRINGS — The residents at Prestwick Chase enjoyed a pop-up farmers market this past week.

Mother-daughter team Meghan Barker and Sharon Anderson, co-owners of Clyde O’Scope Farms, hosted the pop-up market. They offered fresh veggies, flowers, free-range eggs, and home made potpies to residents. Since COVID-19 struck the community this past March, John Rowe, director of marketing at Prestwick, said they have shut down access to the building and asked residents not to leave. To help social distance guidelines, Rowe said his team has done the shopping for each resident.

“We’re doing some shopping for them. Some of the fresh vegetables they might not be thinking about or putting it on their list so now, they can go right outside and grab the fresh produce for themselves,” Rowe said.

As the second week hosting the market, Rowe said residents have been overjoyed to be able to purchase and enjoy locally produced items.

“Last week we had a limited supply of things and the residents purchased flowers, potatoes, all sorts of vegetables for themselves. The people that ran it were very happy,” Rowe said. 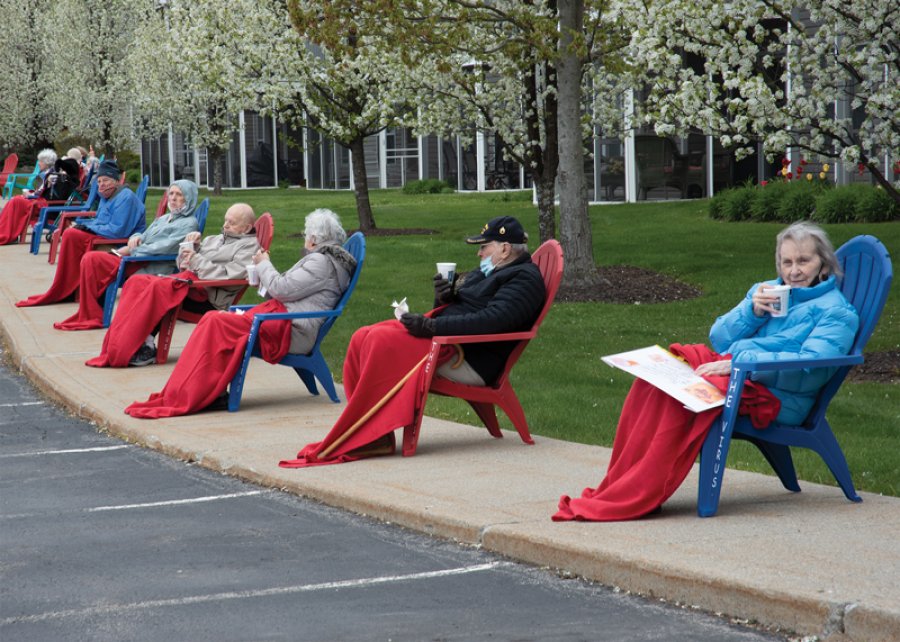 SARATOGA SPRINGS — Families with loved ones living at Prestwick Chase at Saratoga were invited to drive around the building as they smiled, waved and said hello to their mothers and fathers this past Sunday.

Since COVID-19 restrictions struck the community, John Rowe, director of marketing at Prestwick Chase, said they have shut down access to the building and asked residents not to leave. Since no visitors are allowed in, residents were missing a connection with their families.

“We try to help people Facetime with their family members on phones and we have taken Facetime videos. We walk through the hallways and through the buildings so families can see them, but they really don’t have the connection with them that they want,” Rowe said.

Rowe said the whole team at Prestwick came up with the Mother’s Day Drive after being inspired by other senior apartment buildings.

“For Mother’s Day we’re giving all the mother’s an Adirondack chair. The chairs will be spaced apart on a couple of the different wings so people can drive around. It’s a family parade of cars,” Rowe said.

Residents saw a plethora of cars in the parade. Families were invited to wave, but were asked to not hand anything directly to the residents. Rowe said a sanitation room has been set up with ultra violet lights they put all groceries, deliveries and packages in before distributing to the residents.

“We have asked everyone to stay here. The staff has been doing all the residents grocery shopping for them, the pharmaceuticals…anything the residents might need we are doing it all for them,” Rowe said. “We’re just trying to make it the best we can for a situation like this.”

SARATOGA SPRINGS — On Wednesday, Jan. 15, a group of students from Warrensburg and Mayfield Central Schools visited Prestwick Chase to speak to residents about growing up, their careers and their lives today. The students were part of a lifespan/ human development class that is taught at both schools. The residents also had some questions for the students in return: they wanted to learn what life was like for the students today, and their plans for after school. Student visitors included Zach Carpenter, Liam Edmeunds, Chris Lambeth, Serena Stewart, Alexia Insonia, Olivia Dunn, Navae Aponte, Lilliana Powers, and teachers Maryellen Seaman and Stacie Anastasia. Prestwick Chase residents were Marian Peterson, Walter Blair, Bruce Conroy, Pat King, Jane Rydzynski, Ellie Strack and Doris Ludwig.

Prestwick Chase resident Candi Johnson presented Franklin Community Center with a check for $3,070 and nonperishable food items. Candi and other residents hosted a craft fair and donated all the proceeds from their event.

SARATOGA SPRINGS — When you meet Marion Buchanan, you become immediately aware that you are in the presence of a lady in her truest form. Marion’s petite stature belies a tall order of graciousness, and as she takes your coat and shakes your hand, you sense her strong civic duty and know this is a woman who values a good job well done.

Marion was born Dec. 18, 1909 in Dedham, Massachusetts just outside of Boston. A loyal Red Sox fan, the team recently sent her a birthday greeting with some souvenir gifts, including dirt from Fenway Park. She moved to Glenville in 1984, and after selling her home, she moved to Prestwick Chase in Saratoga Springs in 2008, where she is today.

The active 107-year-young woman has a history rich in public service. She is the second child of 7 and has never married, but between all of her nieces, nephews, and their progeny, she says her family numbers around 50.

Marion remembers America’s entry into World War II clearly. It was to be a turning point in her life.

“I was in my living room, listening to the New York Philharmonic, when the announcement came over the radio, we were at war,” recalled Marion. “I was shocked. All the members of my family were, it was totally unexpected.”

She was in her third year at Boston University at the time, working and going to school at night. Not long after that radio announcement, she joined the Women’s Army Corps (WAC).

“I was secretary to the WAC staff director in the European Theater,” said Marion. “When I returned in 1947, I was stationed at the Pentagon for a year and a half. I also served in a bombardier school in Carlsbad, New Mexico. I was an administrative specialist in the personnel division.”

She was thoughtful for a moment, then smiled as she said, “I was scared at first. When I was a child, I suffered from homesickness, but my mother felt I should represent the family and be of service, so she helped me. My brother joined the navy soon after I joined the WACs.”

Marion saw the role of women change dramatically during her life, saying it is very different now from when she first joined the WACs.

“We weren’t accepted,” she said. “We were new, and they thought we wouldn’t be effective. But I think the WACs did a good job, and relieved a lot of the men in their work so they could go off to war.”

She shook her head, saying, “They tell me women still aren’t getting equal pay. One thing I do miss after women’s rights, though, is the respect. It used to be, a man would jump up to let you have his seat.”

As a member of the Greatest Generation, Marion paid attention to current events as a matter of form, and clearly remembers history’s turning points as if they were yesterday.

“I was working for an orthopedic surgeon when a woman called in to speak with her father. She told us Jack Kennedy had been shot,” Marion said seriously. “That was a terrible experience.”

Marion was at the Grand Canyon when Neil Armstrong walked on the moon. “I was very proud of my country,” she said, “and very proud of him, certainly. The whole world was watching. I remember getting our bags at the hotel, and the bellhop, who was Chinese, refused to pack our bags until the take-off. I was very proud of Jack Kennedy for having instigated the program.”

Her favorite presidents are Harry Truman, Jimmy Carter, and, naturally, John F. Kennedy. She laughed and said, “I’m a Republican and my favorites are all Democrats. But Jack really was an inspiration to so many young people at the time.”

Marion said she has no secret to share for longevity. “I’m here by the grace of God,” she said. “I have done nothing at all to improve my life. I guess I would say it’s important to not take life too seriously, and be happy.” And then she laughed and said, “If I were to do it all over again, I probably would make the same exact mistakes I did the first time.”

Marion, who is fond of classical music and jazz; an avid Bridge player; a world traveler even after the war; a dedicated career woman who wore her hats and gloves with style, and a staunch patriot who has served her country well, has left those of us following behind her some very big shoes to fill. Thank you for your service, Marion Buchanan, and happy birthday.