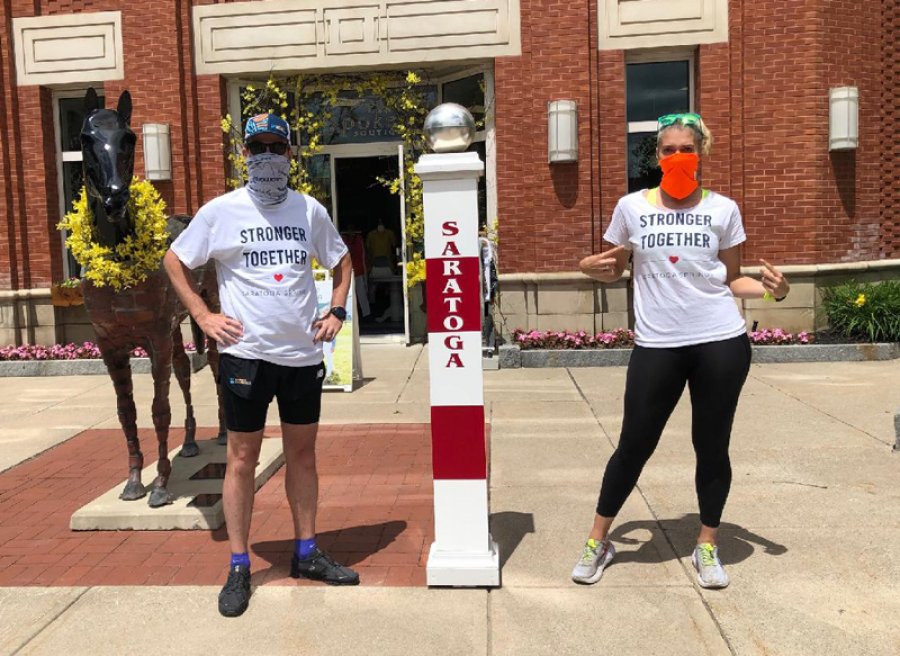 SARATOGA SPRINGS — A local team ran four-miles every four-hours, for 48 hours straight, until they reached a total of 52 miles.

Alexandra Besso and friend Simon Wood joined together to complete the 4x4x48 challenge, designed by David Goggins, a retired Navy Seal, author and motivational speaker. Completed this past weekend, Besso said the experience was one to remember.

“The reason I chose to do this is because I got into triathlon and ultra-running a few years ago and this year was my first big year of really intensely running. I signed up for a 50-mile ultra-marathon over in Vermont. Due to COVID-19 that race and all of my smaller training races were cancelled,” Besso said. “I set a goal for myself of running 50 miles and it was something that was important to me to achieve. I figured if I couldn’t do it through my race in Vermont, I would do it on my own.”

Besso used the challenge to give back to the Saratoga Community. There are 12 separate runs, broken into four-hour segments, that are completed to make up the 4x4x48. Besso and Wood decided as part of their charity run, they would donate one of those segments to #SaratogaStrong and local businesses.

“What better way to not only achieve my own goal, but also do something to help the local community that I love so much,” Besso said.

The seventh segment Besso and Wood completed occurred this past Saturday at 12 p.m. The two ran down Broadway, sporting #SaratogaStrong t-shirts, and visited five of their favorite downtown businesses. They then purchased a gift card through the help of SIX Marketing, a full-service marketing agency.

Another aspect of the charity run was a $520 donation to Wellspring. Spoken Boutique, located at 27 Church St, sponsored $5 for every mile Besso and Wood completed. They each ran a total 51.2 miles during the challenge raising $260. SIX Marketing then matched that donation, bringing the total to $520.

The pair plan to keep on giving this weekend, when five Facebook friends of Spoken Boutique will be the winners of a gift card.

“I think we will pick five random individuals in the community after they comment on a photo of Simon and I running down Broadway. We’ll ask them how they support their local community and randomly select the people to give away the gift cards to,” Besso said.

The gift cards purchased and given away include $75 to Spoken Boutique and $50 each to Kru Coffee, Max Londons, iRun Local and Impressions of Saratoga.  They will post the photo on the Spoken Boutique Facebook page on Saturday and choose winners later next week.

Besso added: “part of the motivation for me was setting this David Goggins challenge and doing it on my own. Setting a goal is important and I’m a very competitive person…it was important to me to achieve that goal even if it was more of a non-traditional way.”

Besso has completed local races in the past, such as the Hudson Crossing triathlon and Code Blue 5-mile race. One local company that made preparing for this race much easier was Greenfork. Based in Saratoga, Greenfork is a meal prep service that provides nutritious meals for the health conscious in the community by using fresh and local ingredients.

“Greenfork made everything a lot easier, not having to worry about going to the grocery store,” Besso said.

Moving forward, Besso and Wood will compete in a 50k run, 32 miles, in the Battlefield sometime in August.

“Once I achieve something I’m always looking for another goal that is more difficult, a little more mileage or more intimidating. We’ll see what the future holds. I would love to complete a 100-miler one day,” Besso said. “Being able to combine my love for participating in the sport of running and the challenge of doing something that seems almost out of reach…being able to accomplish those two things feels amazing. Saratoga has been a wonderful community to me since I’ve been here. The community helps each other and everyone helps in their own way…this is just my way.”